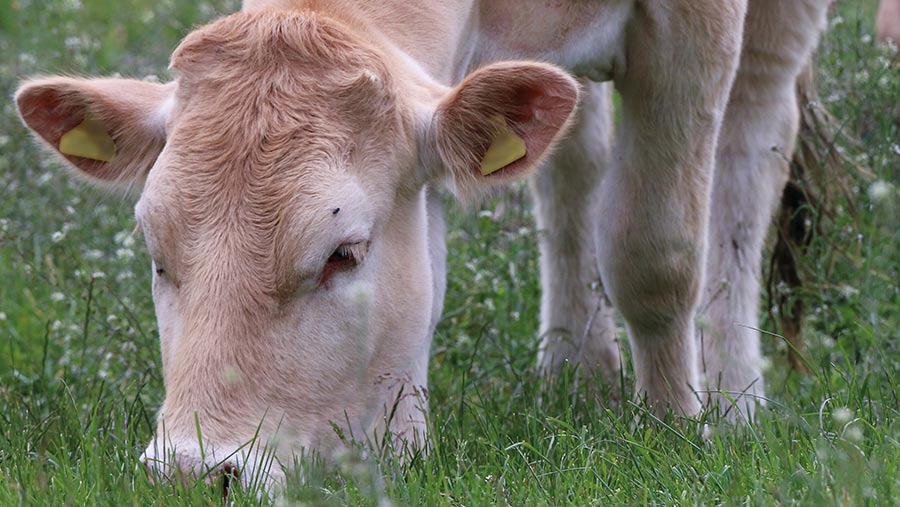 Spring-breeding cattle values have taken an expected lift on the back of a 20% rise in beef prices to help cover startlingly high input costs.

Vendors have seen trade lift by the same amount, providing sufficient bidding interest can be drummed up for the right genetics.

On the positive side, cull cows can be budgeted at about £150-£250 more than in recent years, while many markets saw a 30-50p/kg lift in suckled calves last autumn.

But for straw-bedded, grain-feeding systems, housing cows for six or seven months, the uplift must cover a winter bedding cost of £150-£175 a cow, and barley coming onto the farm at more than £210/tonne.

See also: Suckled calf prices up 50p/kg on the year as confidence grows

Trade for the beef breeding benchmark in the north-east region – the black Limousin-cross cow and calf – is reflective of a stronger beef market this year, said Chris Armstrong of Hexham and Northern Marts.

“Many are either bought as bulling heifers or out of the store ring at about £1,200-£1,500 a head, so people will try and double their money,” said Mr Armstrong.

However, he stressed that the suckler industry had been in decline, while dairying efficiency was on the increase, with sexed semen and a great supply of beef-cross dairy calves.

Limited labour, fewer members of the next generation coming through, and several pieces of yard machinery which needed replacing at once were common themes for dispersing herds.

“Our upland farm runs Angus-crosses, and we use mini-Hesston bales which we got for £8 two years ago,” said Mr Armstrong. “We have been doing well to buy them for £20 recently, which is why we housed the cows eight weeks later this time.”

Angus-cross cows with calves, as well as Limousin-cross and Simmental-based cows have made £200 or so more this spring than a year ago, said Raymond Kennedy, cattle and sheep auctioneer for United Auctions at Dalmally.

“Last year we didn’t see many dispersals, so the demand side has been there, which has supported trade,” he said.

Costs and weather conditions were becoming increasingly challenging on the west coast, meaning native sires were being used to make cows hardier and bring down cow size, he added.