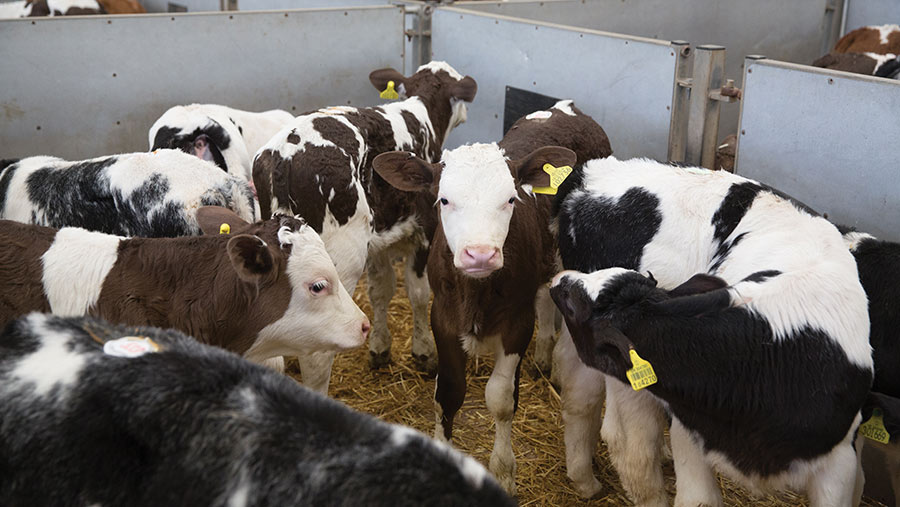 Baby-rearing calf prices aren’t quite the talking point they were three months ago, but are still regularly 50-75% dearer on the year for Hereford and continental crosses.

Elevated beef prices have lifted calf and store cattle values, but many in the industry are beginning to worry that higher stock prices will be eroded by rising costs.

Industry prices show ex-farm wheat and barley straw is £25-£30/t dearer on the year as of 5 October, with many quotes of £90-£110/t delivered around the industry.

AHDB weekly averages suggest a slight drop in value from July highs. Young (three weeks and under) continental bull calves are £24 back at £224 and Hereford cross bulls are £22 back at £162 in September.

Stronger calves continue to be in good demand at Bentham, where the onset of winter and an autumn flush of calves has restrained prices slightly for smaller Holstein-Friesians.

This is according to auctioneer Will Alexander, who regularly gets in excess of 100 calves at weekly Wednesday sales.

Mr Alexander said: “We’ve certainly seen a bit of a drop for young calves, some are £30 apiece less than they were, but trade could easily pick up and things can change in a fortnight or so.

“It could be a long time inside for young calves but come Christmas time trade can start to alter as buyers aren’t looking at as long a winter.”

Trade remains very strong for calves on the whole, which, like store cattle, are being buoyed by the higher beef price, stressed Ivor Lowe of Bagshaws.

A slightly larger yarding of 107 calves saw trade “just as strong as the week before”.