Farmers arrived from all corners of the country to see 375 lots get knocked down at one of the largest arable estates in recent years.

Farmers Weekly was on hand at the 1,290ha Rainthorpe Farms in Welton, Lincs to see the action.

Watch the video to see the Quadtrac auction and read about the big sales below.

A tense hush descended over the 500-strong crowd during the final stages of lot 439. The two-year old machine was in stellar condition and had plenty of life left in it with only 1,300 hours on the clock. 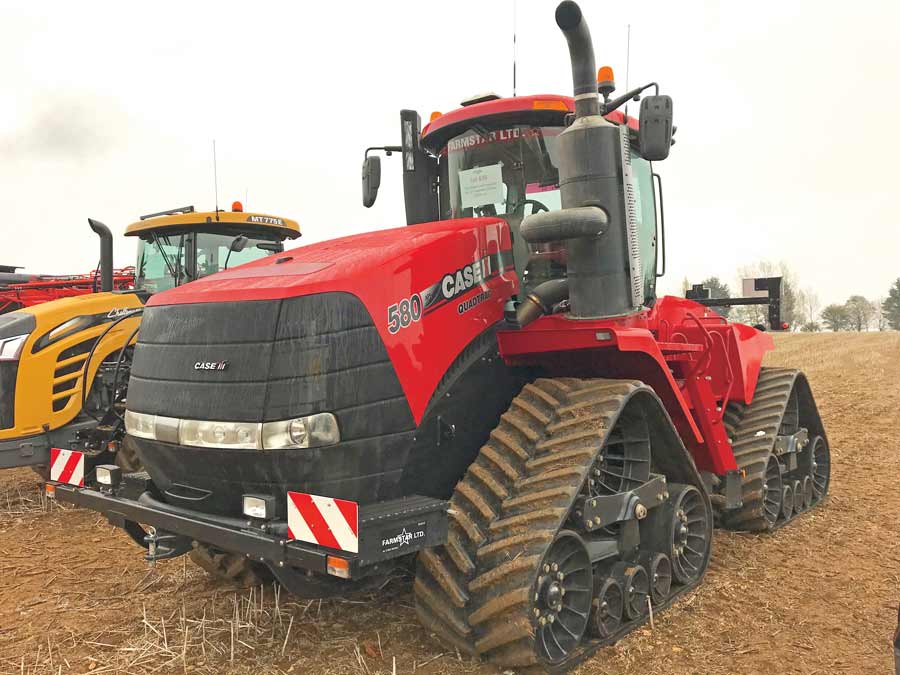 There was interest from farmers and dealers alike in the four-tracked crawler, which had a strong spec list including Case-IH’s 372 guidance system, AFS command and five spool valves, along with an LED light package and rear linkage.

Diehard Challenger fans looking for a replacement wouldn’t have been disappointed with the 775E on offer at Rainthorpe.

The immaculate machine had a just-worn-in 1,560-hours and the luxury of a new engine, fitted in 2017 following a manufacturer recall.

As with most machines on sale, the high spec included a 2017 Ag Leader guidance system, Cat4 linkage, five spools and front weights, along with being Isobus ready.

The winning bidder, Yorkshire Tractors, had the comfort of knowing the crawler had been on the same farm from new. 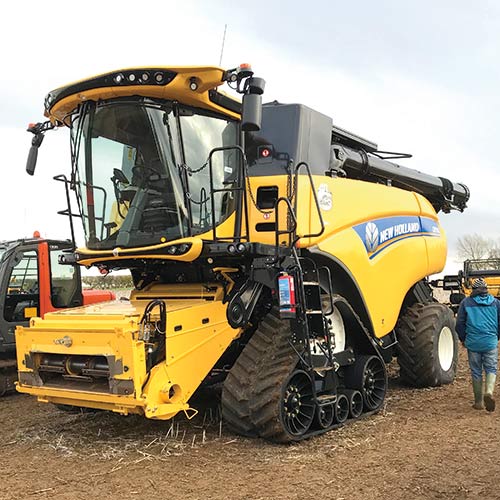 Serviced every year by dealer Platts Harris, the rotary combine had Intellicruise along with GPS telematics and an LED light package. 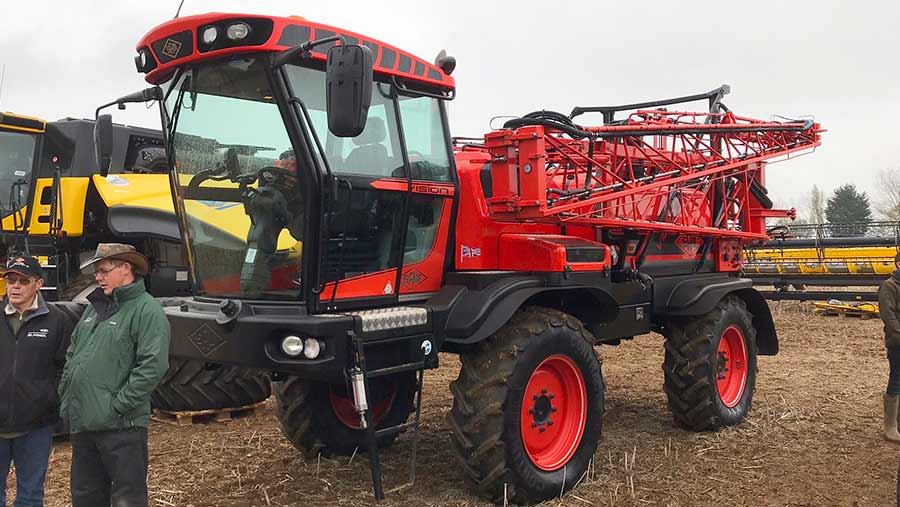 The bigger of the two sprayers at the sale was a Sands Vision 4.0 with GPS 10-section auto shut-off and Ag-leader self-steer steering wheel.

The 36m boom could be shut down to 24m if required and had quad nozzle bodies on a single-line system running from a 4,000-litre tank.

The 2013 machine had worked hard, covering 3,132 hours, and been on the farm since new. Power came from a Deutz engine, while other extras included a reversing camera and larger wing mirrors. 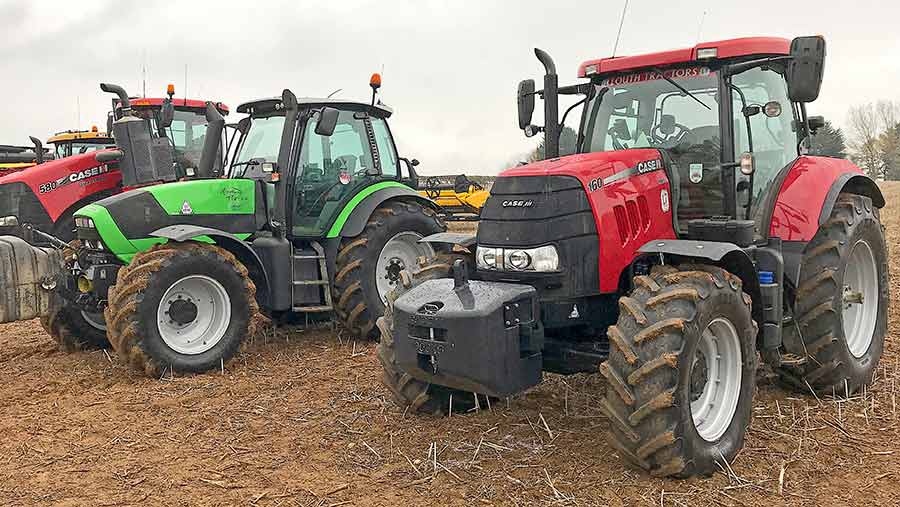 There were only two conventional tractors on offer, and even though there was a gap of few thousand hours and two years between the high-spec machines, they were separated in price by only £1,500.

The Puma had front and cab suspension and extra mirrors and was guidance and Isobus ready, along with a 50kph power shift box.

It had a healthy 2,712 hours on the clock and came with a 1,000kg Case-IH front weight and new tyres fitted this year.

In the green corner was a slightly older 2011 Deutz 620 which ran through a 50kph CVT gearbox.

It had done a few more hours than its sibling at 4,665 but had the benefit of a front linkage and pto, along with four spool valves and air brakes. 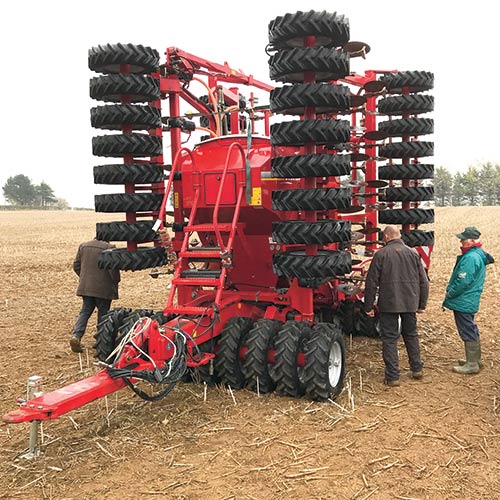 Rainthorpe’s 8m Horsch Sprinter certainly didn’t look like a 10-year-old machine and, unsurprisingly, attracted some keen bidding from the crowd.

A new model will set you back close to £100,000, so good second-hand examples will always been in demand. 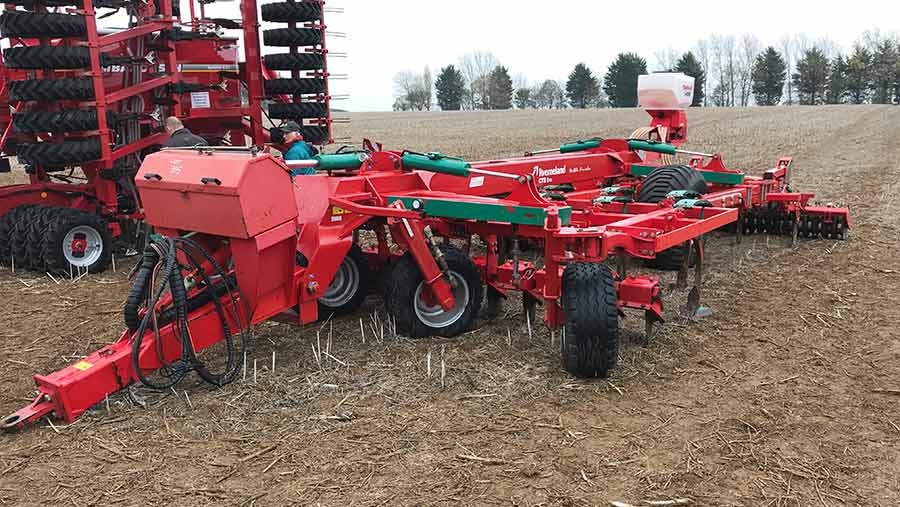 Not the most common of min-till cultivators on the market, but when the hammer fell at £16k, it represented decent value for money for a 5m machine, which had a 2014 Stocks Turbo i-Con seeder unit and pipework fitted to the rear.

The 2011 model had hydraulic folding and a gang of leading discs followed by cultivator tines, subsoiler legs and a press. 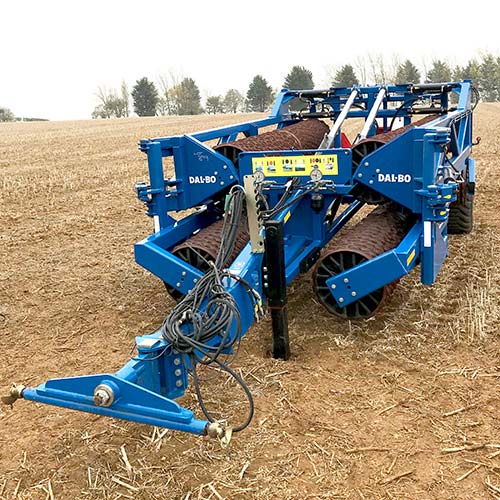 Another well-looked-after piece of kit was the huge 16.3m set of Dal-Bo rolls.

These came with the optional breaker rings and had a 2017 Stocks Fan-Jet Pro 130 slug pelleter and looked good value. 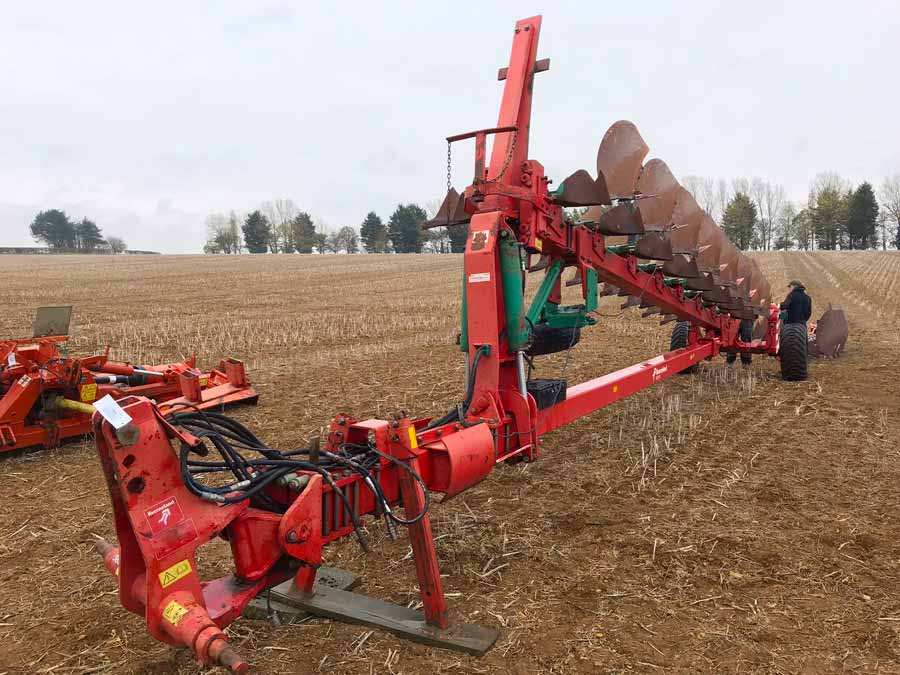 The auctioneer made it clear that this huge semi-mounted 12-furrow plough needed a fair chunk of new metal to get it useable again, with the rear four furrows not connected to the main frame, and this was reflected the winning bid.

This 2014 single leg TWB mole plough looked as though it had never been used and represented a healthy saving from buying new.

Behind it was a 8.3m folding Rexius Twin, which had leading tines, levelling board and double packer. 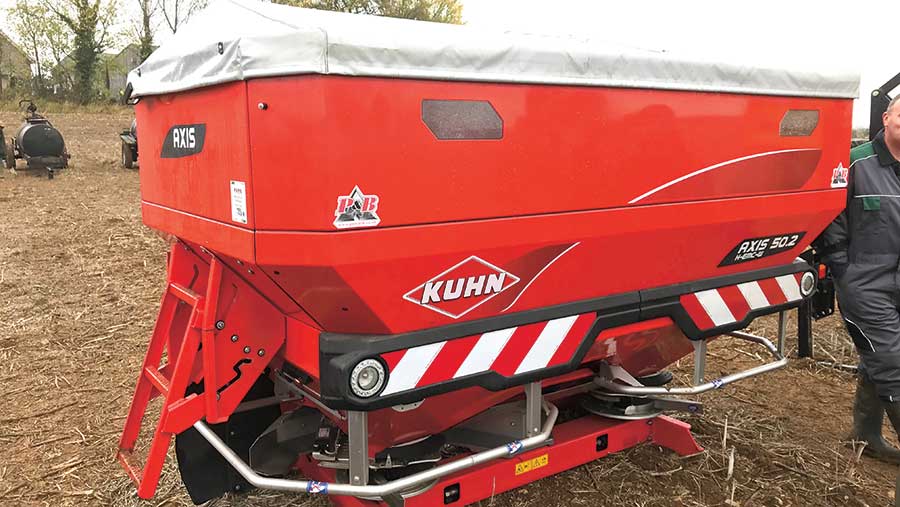 A very smart Kuhn mounted twin-disc fertiliser spinner had all the bells and whistles, including FMX auto shut-off, headland shut-off and weigh cells.

A Trimble FMX box and speed rate governor controlled the application rate from the S8 discs, with the spreader being hydraulically driven.

Top of the trailer selection billing were two identical AS Marston 18-tonne tandem axle models from 2001.

Both had a manual tailgate, rollover sheet, air brakes and a sprung axle and sat on 550/60/22.5 tyres all round.

A smart-looking selection of pickups was headed by a 2012 VW Amarok in Highline spec, powered by a six-speed manual gearbox, along with sat nav and alloy wheels.

The two other pickups on offer were both Ford Rangers, with the 2000 model having covered 78,763 miles and been on the farm since new. Both were crew cabs and had five-speed manual boxes. 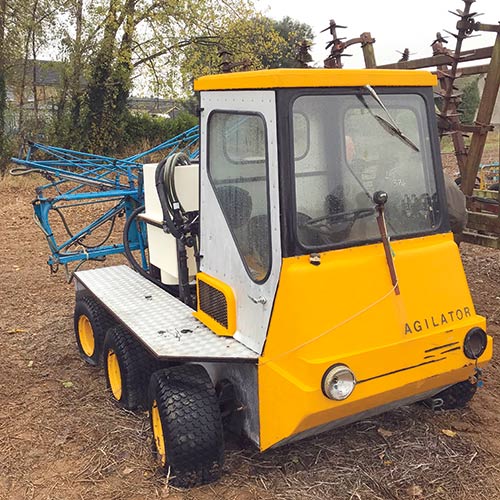 One of the rarer items on sale was an Agilator 12m sprayer. The six-wheeled machine has an Austin 110 engine and a 100-litre tank.

The year of manufacturer was unknown (sometime in the early 1980s) and it needed a bit of love as three of the six tyres were flat. However it had only 548 hours on the clock and looked a bargain for the winning bidder. 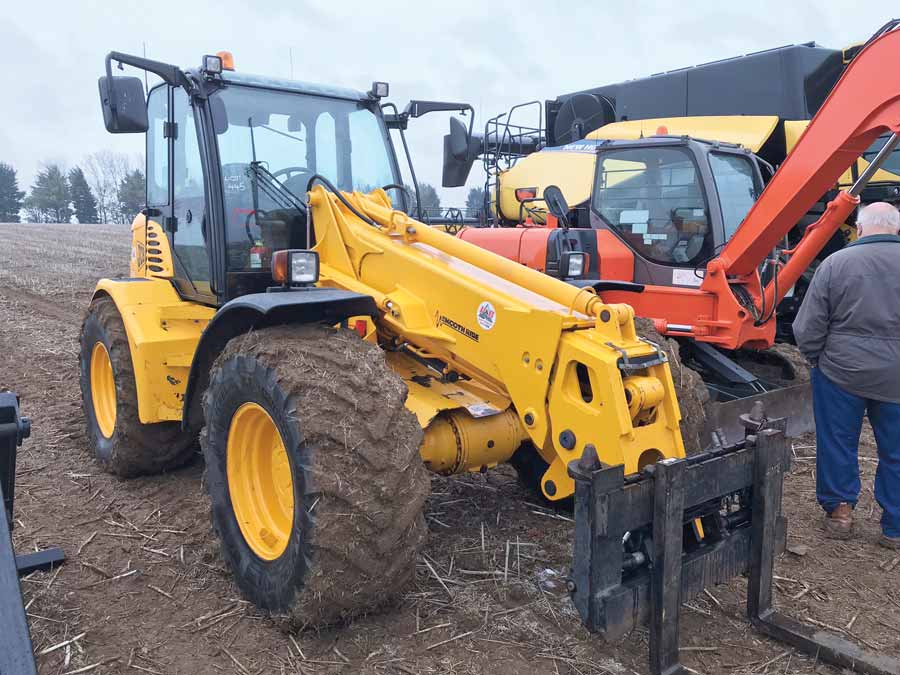 Another machine that had been on the farm since new was a pivot-steer JCB TM300. The four-wheel-drive loader had 4,485 hours on the clock and came with pallet tines and Smoothride cushioning, as well as 500/70/R42 Michelin tyres all round.

At the budget end of the sale were a couple of single-axle, non-bunded water bowsers, both with hand-operated pumps and hoses, although one benefited from a pto drive.

They both needed some serious maintenance to bring them up to standard but were loose change for most.