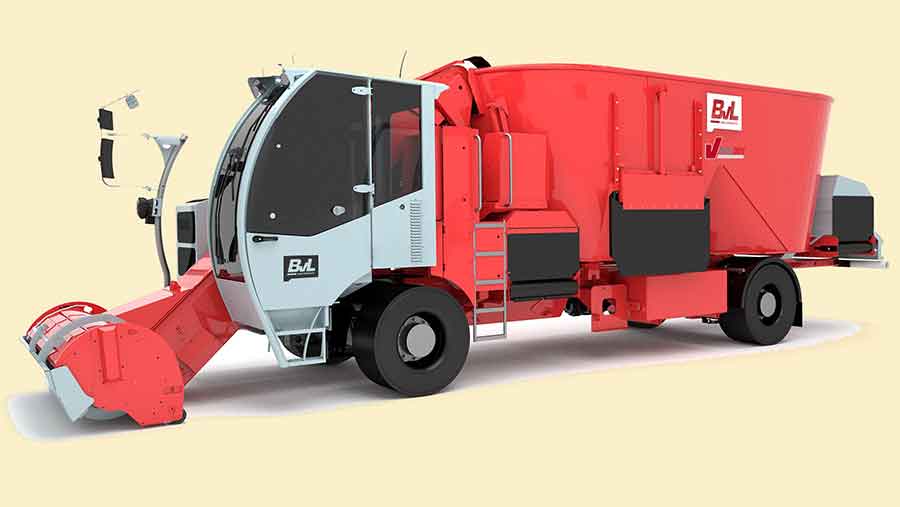 German company BvL has beefed up its range of self-propelled diet feeders with a large-capacity model to rival the likes of Keenan and Strautmann, which both launched new products earlier this year.

The company already has a smaller model – Vmix Drive Maxxis Plus –  in its ranks that has only one mixing auger.

However the new model – Vmix Drive Maxxis Plus 2S – has two augers with bigger mixer loads of 17-21cu m able to feed between 100-155 cows in one pass.

Power comes from a six-cylinder, 6.7-litre FPT diesel engine churning out 224hp. There’s standard four-wheel-steer and optional four-wheel-drive for those sticky areas, while the machine is available with 20, 25 or 40kph top speed.

Similar to the smaller sibling, the new model has the same toothed roller, which gently plucks the material leaving a clean edge to the clamp face, with discharge from either side via an 800mm wide belt.

Inside the cab there’s a rear-view camera, an armrest with a multifunction joystick, which controls all the machines main functions, while the cab is suspended with the seat and joystick moving together with the bumps.

Prices have not been released yet.