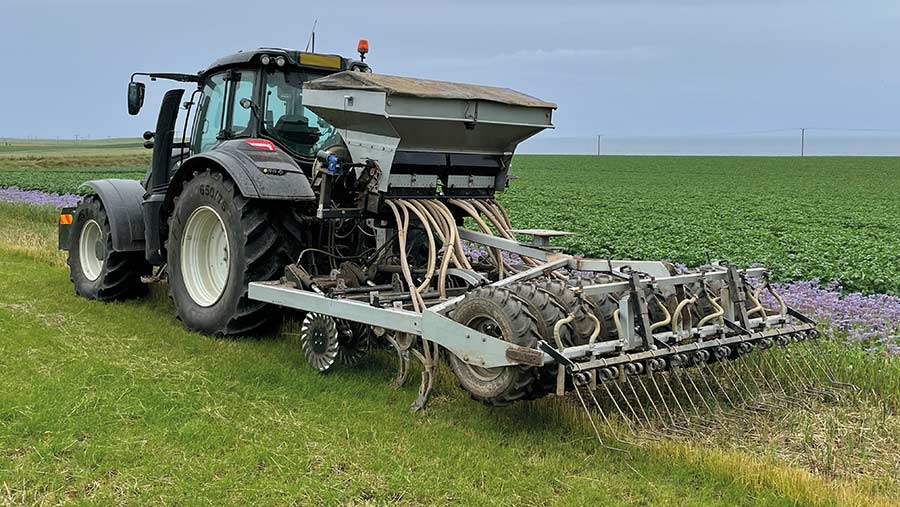 Craig Peddie returned home to his family’s Fife farm in 2014 determined to pare down the intensive crop establishment regime to something that involved less soil movement, labour and machinery – but with no reduction in yield.

The plough and power-harrow system previously employed at Cornceres Farm, near St Andrews on Scotland’s east coast, had continued to produce a strong wheat crop average of 11t/ha, oilseed rape of 4t/ha and winter beans at 5t/ha.

But to reach his arable utopia, Mr Peddie wanted a multipurpose, single-pass tine drill with extra flexibility for establishing different crops in a timely manner. 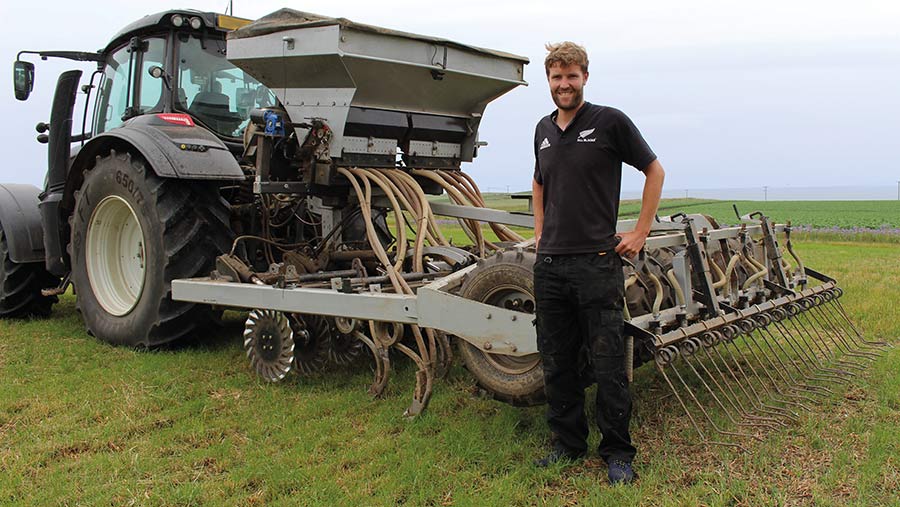 This, he decided, would require something bespoke, with the aim of running subsoiler legs ahead of the tine coulters for oilseed rape and the ability to switch to slot-forming turbo discs for wheat and barley.

Changing any arable crop establishment system isn’t without its risks, so Mr Peddie decided to start with minor tweaks and ramp up investment once they had proven successful. The baby steps were particularly important given he didn’t know of anyone in his local area that was direct-drilling, making him something of a pioneer.

The first move was to direct-drill 20ha of oilseed rape with a Spaldings Flatlift subsoiler in 2014, which worked well for two seasons and slashed the cost of establishment.

With the subsoiler-based concept proven, in 2016 he decided to design his own drill that was to be based on a 150mm box section, 10mm-thick main frame, with the aim of making it adaptable for brassicas, cereals and legumes.

“The size and strength of steel is probably a little overkill for a 3m machine,” explains Mr Peddie. “My Valtra T194 needs a 1,600kg weight block on the front to keep its nose down and it is near the limits of its rear lift when the hopper is full.”

At the front he mounted five subsoiler legs with auto-reset protection to minimise the risk of breakages on his stony ground. Behind these are two staggered rows of tine coulters – 10 outlets in total – with 1in points for establishing oilseed rape. 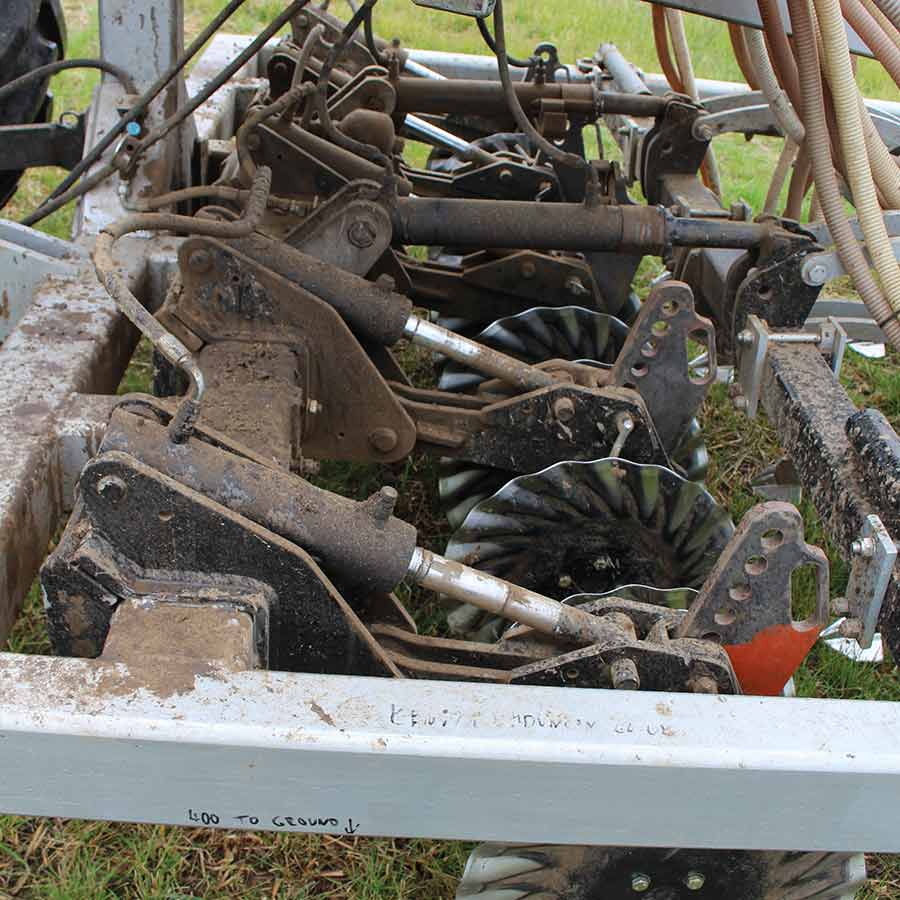 The coulters run on a parallel linkage with hydraulic ram wafer blocks to set the depth. They attach to the main frame on either side in a greased sleeve to allow independent movement.

“From the outset my aim was to have a modular drill, with components able to be dropped in and lifted out of work.

“The rear packer is welded in place, rather than being adjustable as on other mounted machines of this type. This means that the coulters and subsoiler legs are independently tweaked with no change to the pitch of the drill, so it remains level from front to back.” 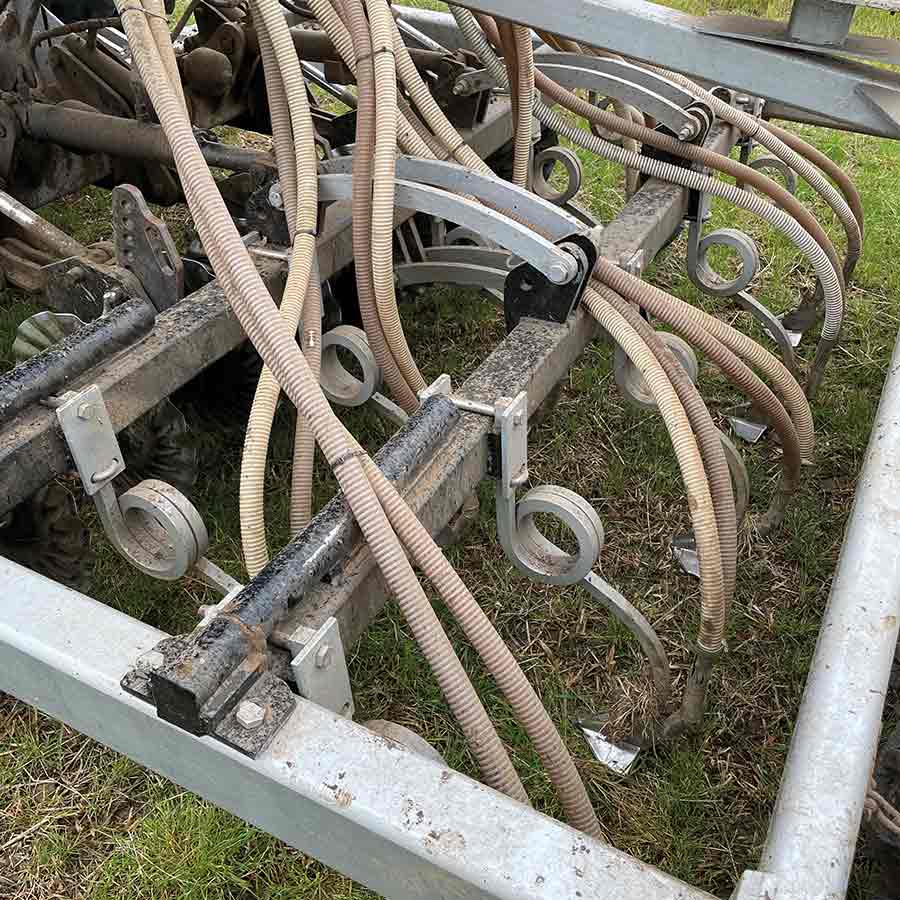 By this point, Mr Peddie had spent about £12,000, which included £5,000 for the auto-reset legs, a significant amount of laser-cut steel and a 600kg KRM hopper from an old Roger drill that cost £1,200 but brought with it a simple metering system.

Another £1,200 went towards a packer from a power-harrow, which did a good job of pressing the seed-bed back down. However, he realised quite early on that the scrapers were too close to the packer, resulting in it frequently bunging up on sticky surfaces.

“Also, the ridges were spaced at about 80mm along the roller and didn’t line up with the points sowing the seed, so seed-to-soil contact wasn’t as good as it could have been. It took a fair bit of pulling, too, as there was a large rolling resistance, plus the packer stuck a long way out the back.”

So it was back to the drawing board, and Mr Peddie decided to invest in a set of Horsch wheel rims from the German firm’s Sprinter drill to replace the packer. The centres were sent away to be laser-cut and, to save a few quid, he found and fitted his own tyres.

The wheels (10 in total) now run directly behind each tine to press where it is needed, leaving the bands of stubble between untouched – unlike the full-width packer before. However, the downside of scrimping on the tyres and opting for aftermarket versions with a shallower corner profile is that they have a tendency to pick up stones, so he strung a length of chain between each tyre to knock off any unwanted passengers.

Initially, the heavy legs worked well, lifting the compacted areas of ground down to a maximum of 330mm, which was as much as the Valtra could handle. However, as each year passed the compaction was less significant – soil structure was improving and field traffic had been reduced – and that opened the door to trials with cereal crops.

“The first major change was to remove the subsoiler legs from the auto reset carriages, as they were great for deeper-rooting crops such as oilseed rape, but had a huge horsepower requirement that was completely wasted when sowing cereals.”

There was a decent fuel saving to be made, too, with Mr Peddie estimating that swapping the legs for a row of 10 straight discs reduced the Valtra’s diesel consumption from 10 litres/ha to 4 litres/ha.

Two 533mm discs were mounted on each auto reset assembly via specially made brackets. Their angled flutes create a small channel of tilth and open a slot for the coulters to work through, as well as minimising the likelihood of hair-pinning.

Cutting the channel in front of the tine coulters also helps reduce soil burst and throw from the 5in double-outlet Dutch points as they tear through the ground.

“The brackets keep the legs and discs interchangeable. I designed them on the computer and sent the drawings away to be laser-cut,” explains Mr Peddie.

“Although this sounds expensive, the reality is the finished product is way beyond anything I could have rustled up in the farm workshop, and the full assembly including discs and laser-cutting came to about £1,700, which I was quite happy with.”

There have been a few more tweaks and touch-ups to the finished product. A problem with back pressure building up in the seed-delivery system, due to two pipes feeding into a single coulter outlet, meant seed was returning to the hopper.

To overcome this, he needed a way of giving the pent-up air an exhaust when it got to the coulters, which was achieved by carving several slits in the rear of the tube with an angle grinder. This allowed the air to escape and the seed to continue down into the soil.

“The last piece of the puzzle has been the retrofit RDS variable-rate kit from Weaving to replace the original land wheel system, which means we can now do something with the soil data we’ve started gathering,” says Mr Peddie. 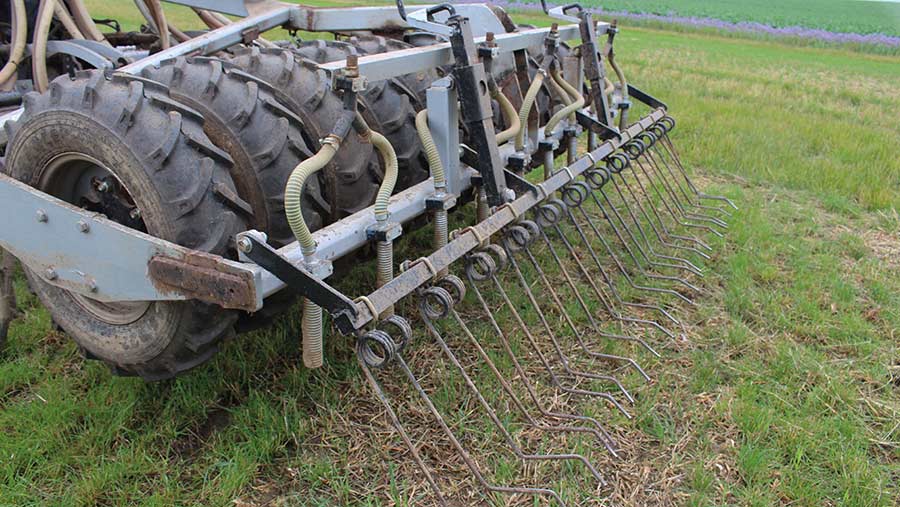 “I regularly noticed that some areas of the fields outperformed others, so being able to vary seed rates for less-productive areas could boost yields. I’m not aiming to reduce the quantity of seed sown, but rather increase or decrease the rate in the right areas.”

Unsurprisingly, he fitted it himself – a small motor went on one side to the hopper, along with sensors to the metering shaft and fan. It is now just a simple task of tapping the rate on the in-cab box rather than getting out to make adjustments. 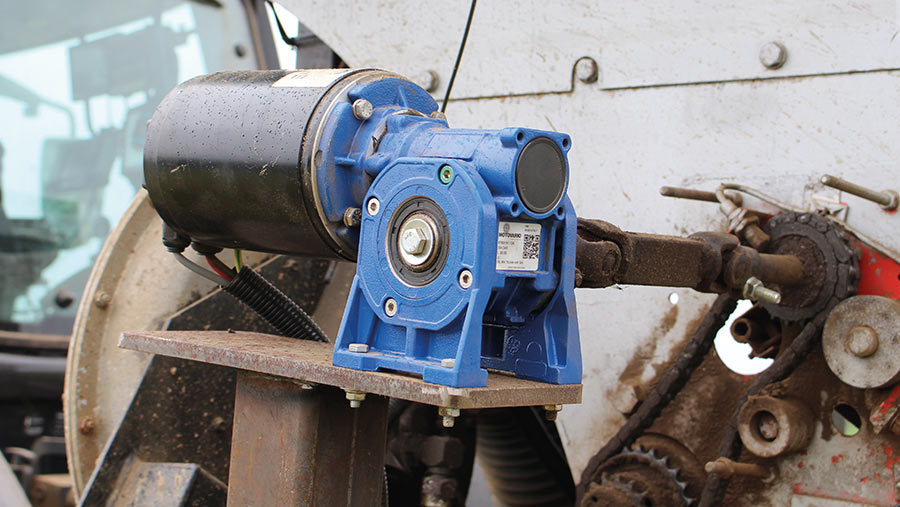 A small KRM seeding unit that was already on the farm is swapped between the cultivator (see “Seedtilla 5m cultivator”) and the drill with an additional set of pipes behind the packer wheels to dribble slug pellets on the surface. The rear following harrows then scatter soil and iron out any lumps, and their pressure can be manually adjusted. 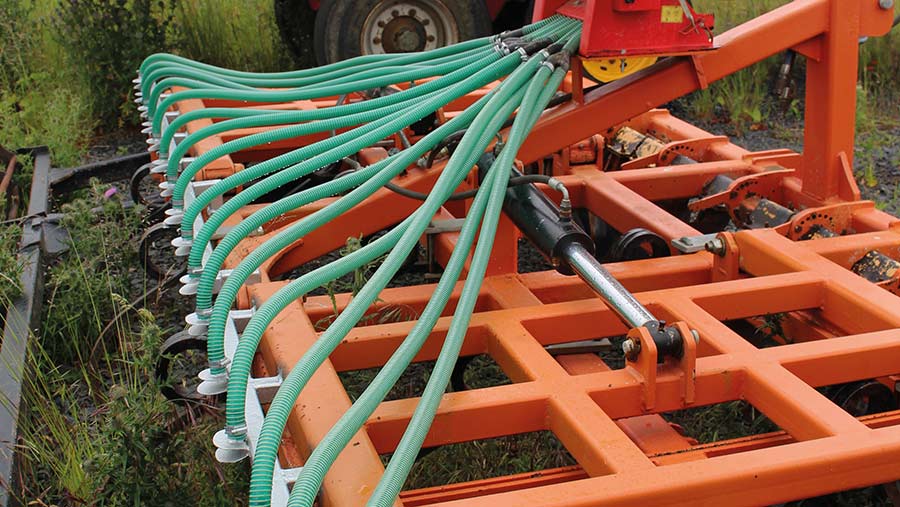 All in, Mr Peddie spent about £20,000, which included a couple of cameras – one inside the hopper and the other facing to the rear, allowing him to keep tabs on parts of the drill that can’t be seen from the cab.

“The plough now only makes an appearance prior to winter barley drilling,” says Mr Peddie, “but, pleasingly, yields have remained constant, with a better gross margin because I’m making fewer passes and spending less time in the tractor seat.

Craig Peddie used the first Covid-19 lockdown last year to build a high-speed cultivator capable of mixing the top inch of soil to generate a chit and establish a cover crop in one pass.

The implement he previously used was based on a Massey grubber cultivator, but the headstock wasn’t up to the job and it ended up breaking in half.

His new design features a stronger, 3m-wide centre section that is better suited to rattling across stubbles at up to 20kph. However, for road transport this meant the geometry of the 1m-wide wings required a hinge point much closer to the centre of the machine, so it all folded inside the main frame.

At the front is a set of manually height-adjustable Vaderstad Crosscutter discs on arms sourced through Agri-Linc. The discs mix the top layer of soil, with following tines breaking the surface which, on oilseed rape stubbles, can be tough. The tines run on Acre Plus 5in duck-foot points that Mr Peddie says offer enough of a surface ruffle without hooking up too many stones. 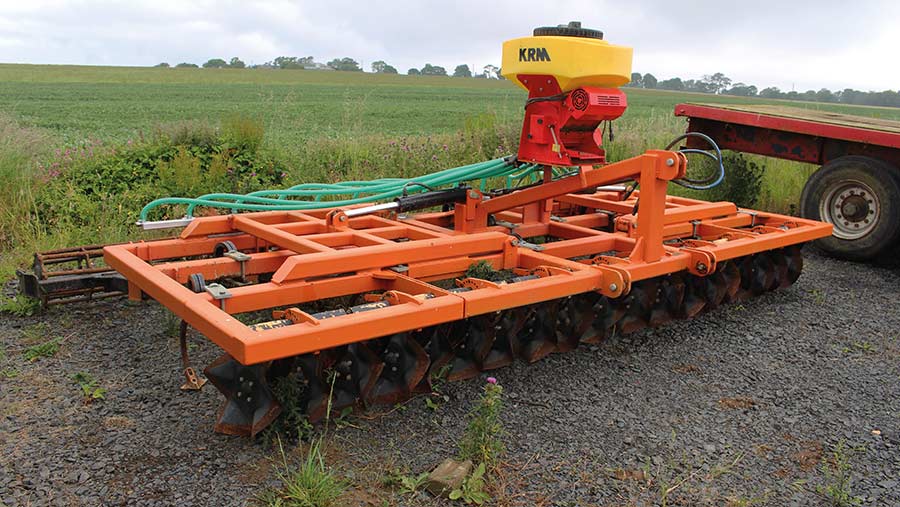 This gives good mixing for a cover crop to get established.

A KRM seeder feeds pipes behind the tines, before a following crumble roller, with six manual height settings, provides consolidation and soil scatter over the seeds.

Currently, Mr Peddie is sowing a mix of clover, radish and anything that is quick growing to give soil cover on land after winter barley harvest. Last year was its debut season, but he has since picked up a bit of contracting work for it.