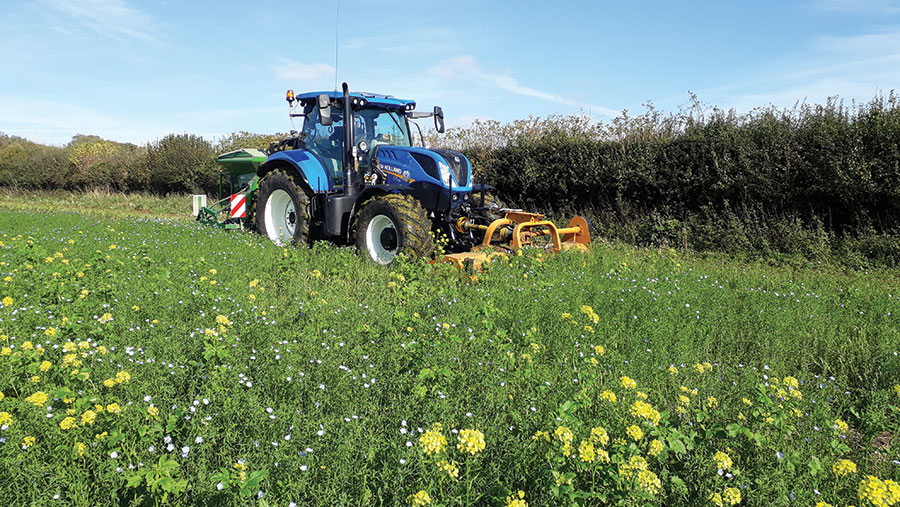 After years of struggling to make his conventional arable rotation pay, a tenant farmer has begun trialling a system that rewards him for environmental gains rather than bumper yields.

John Hawkins runs 239ha of marginal land at Bagber Farm, Blandford Forum, and has abandoned his min-till regime, replacing it with a low-input rotation that builds natural fertility and reduces his reliance on artificial fertilisers.

The hope is that this so-called “regenerative agriculture” trial will significantly reduce his financial risk, cut his workload and give considerable environmental benefits.

This should also stand him in good stead when the Basic Payment Scheme is superseded by a system that offers rewards for public goods such as biodiversity improvements and climate change mitigation. 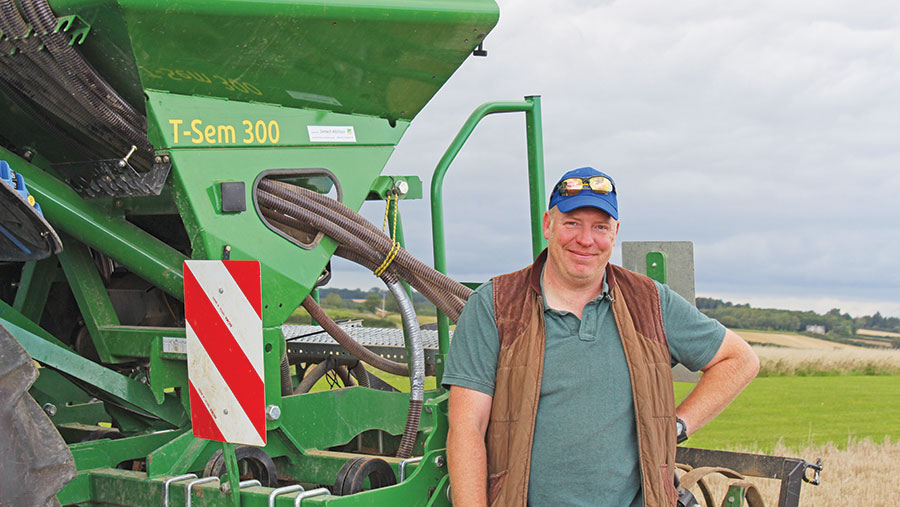 Mr Hawkins designed and implemented the trial himself and has funded it by signing up to a whole-farm Mid-Tier Countryside Stewardship scheme and an arable reversion project sponsored by Wessex Water.

We paid him a visit and quizzed him on how the system is working out after its first full season.

Why did you decide to change the way you farm?

We achieved fairly average yields, with wheat coming off at about 9t/ha. But because our soils are chalk downland, we were relying on 7t/ha of chicken manure, maximum nitrogen doses and a lot of chemical input to get there.

These high costs meant it was a real challenge to make a profit, plus we had an ageing machinery fleet, poor grain storage and no money to invest.

After taking part in some environmental trials, we began to see a different way of doing things. The first was an Adas-led Wagrico scheme, which focused on agricultural pollution from fertilisers. 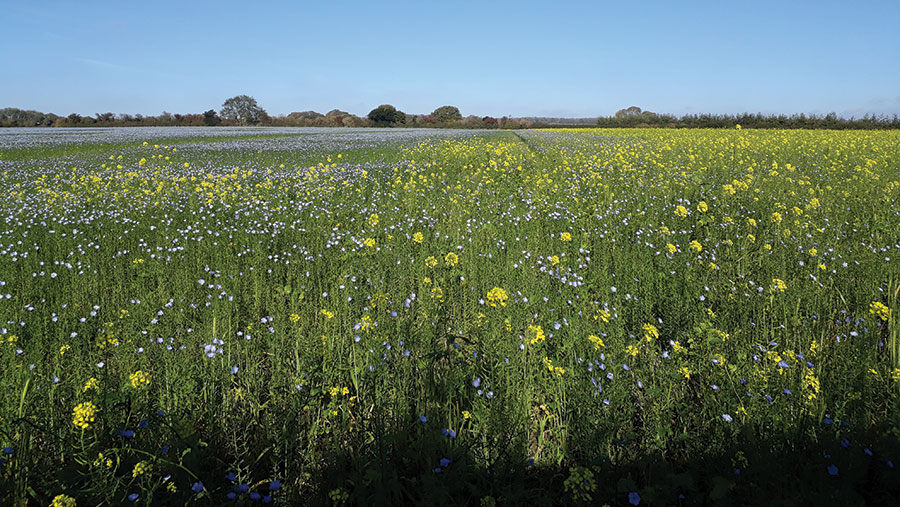 But it wasn’t until we started working with Wessex Water that we really took it seriously. Because the farm sits next to one of its main boreholes, the water quality team was keen to work with us and help reduce spikes in water nitrate levels.

This led to some funded cover crop trials and arable reversion, both of which were less expensive to implement than our arable crops and yielded better returns.

That’s when the idea came to trial a regenerative agriculture scheme across the whole farm.

How did you set up the trial?

Wessex Water provided funding for some of the trial, but I needed an additional income for the environmental capital I would be creating.

This meant signing up to a whole-farm Mid-Tier Countryside Stewardship programme, which required a considerable amount of work.

It was hard to design a scheme that met the Mid-Tier prescriptions, complied with BPS/EFA rules and satisfied the contract with Wessex Water.

But the biggest hardship was the bureaucracy we encountered while dealing with Defra. This was intolerable at times and it was made far more complicated than necessary. Sadly, it’s the biggest barrier to setting up a system like this.

We got there in the end, but if it wasn’t for the help of our catchment sensitive farming specialist, we would have likely failed.

What is your crop rotation?

Our standard rotation starts with the establishment of fertility- and carbon-building leys, which are made up of various grasses, red clover and vetch. No livestock are allowed in the rotation.

After two years, these are sprayed off with glyphosate and a spring barley or canary seed crop is planted directly into it with our no-till tine drill. 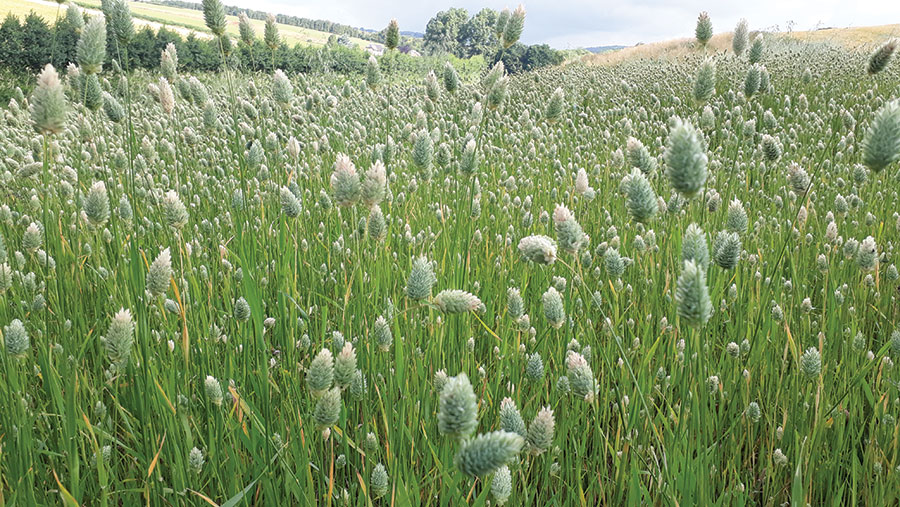 An overwintered cover crop comes next, followed by a second spring cereal before going back into a fertility-building ley.

At the moment, we have roughly half the farm planted with cover crops (ready for establishing a cereal in the spring) and half in the leys. However, as we’re only halfway through our second season, the system isn’t yet in full swing.

The primary aim of the rotation is to improve our soil health and build natural fertility, but it’s also a far more cost-effective and less labour-intensive system than conventional crop establishment. The leys also have the added benefit of helping control blackgrass.

Generally, spring cereals have returned the best profit margins for us, so there hasn’t been much temptation to gamble on a high-input winter wheat crop.

Alongside the standard rotation, we have 6ha of wildflower meadows, 8ha of wild bird food mix and 6ha of cherry trees, which are left over from a diversification that failed to pay its way. We also carry out biennial hedgecutting.

On top of that, there is 10ha of reed canary grass planted on the main run-off areas. This is a Wessex Water-sponsored four-year experiment.

What machinery are you using?

All crops are established using a 3m Simtech T-Sem drill and we have a 3m Teagle flail-topper mounted on the front so we can mow and drill straight into the leys or cover crops.

The main aim of the flail is to reduce the bulk of material going through the drill, but it also helps release nitrogen and make it available to the next crop. 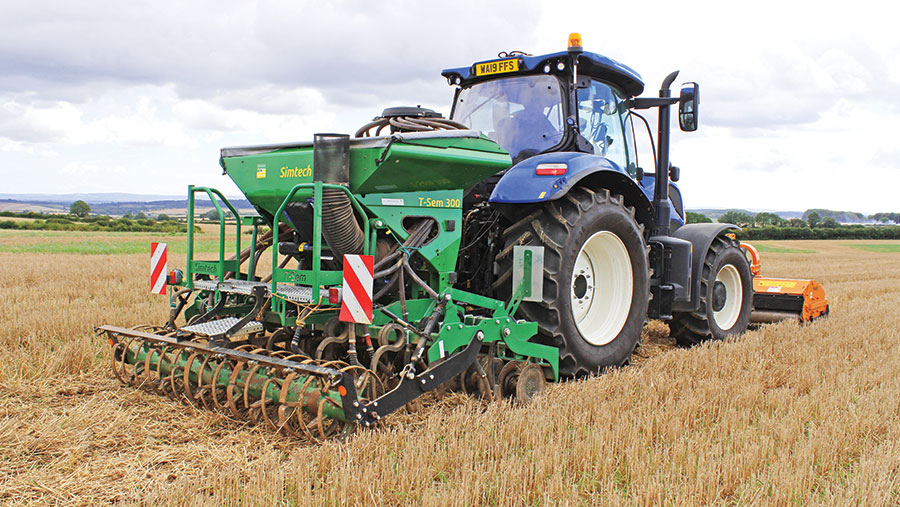 This outfit is mounted on a rented New Holland T7.210, which is the farm’s only frontline tractor. Having a new machine has allowed me to spec RTK auto-steer, which makes the job of driving the drill through thick leys and cover crops much more manageable.

In total, I’m doing about 200ha of drilling a year and I can travel at a rate of 2ha/hour. There are no other operations, so it’s only 100 hours of work each year – roughly one-third of what I was doing when I was min-tilling.

The drill is set to 18.75cm rows and I’ve upped the seed rate to compensate for the slightly more challenging conditions the seeds are going into. 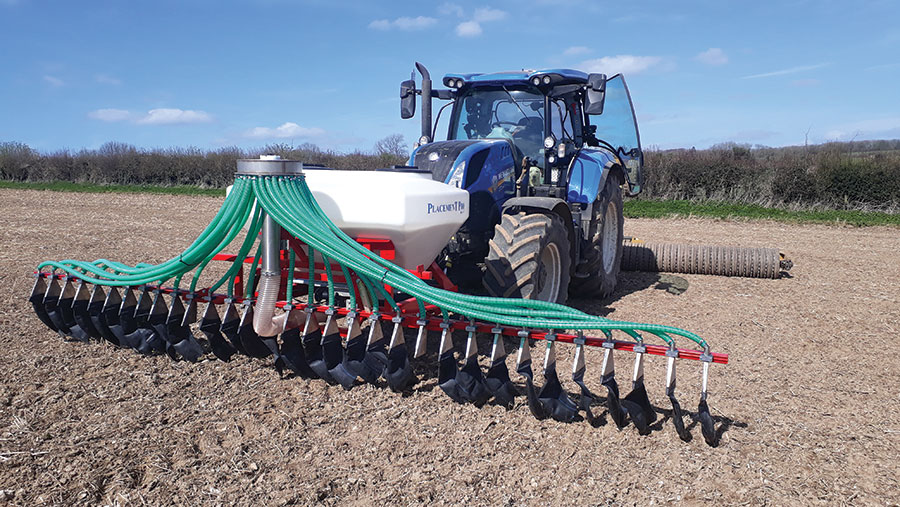 I also have a custom-built fertiliser-banding machine, which I’m using to apply a small amount of granular urea in the crop row. The idea is that I’m not wasting money fertilising the areas where there isn’t any crop.

Ideally, cover crops are broadcast with a fertiliser spreader in early autumn and pressed in with the Cambridge rolls. However, this only works when rain is forecast, so if it’s looking dry, I will use the T-Sem drill.

What environmental benefits have you seen so far?

Already, we’ve seen a massive increase in butterflies and summer pollinators and, interestingly, there has been no evidence of flea beetle on brassica cover crops.

There has also been a significant rise in the number of ground-nesting birds and rare raptors, thanks largely to the bigger population of ground-dwelling mice and voles. Soil health seems better too, with a lot more evidence of worm activity.

With the help of Wessex Water, we are continuously monitoring the scheme to measure the effect it is having. It can then be enhanced and improved on a six-monthly rolling basis to deliver better results.

Sadly, we are yet to receive any follow-up requests from Defra and there still seems to be no room to improve the scheme during its life.

How does the trial stack up financially?

The most important difference in our finances is that we’ve massively reduced risk by securing a steady income and slashing our growing costs.

This means each tonne of crop we sell has cost a lot less to produce than it did when we were chasing maximum output.

Our first harvest saw spring barley yields drop from about 7t/ha to 5t/ha, but we met quality and because it was so cheap to grow, the gross margin was actually higher.

It’s also a far less stressful way of doing things and it’s nice to not be burning the midnight oil every night in the summer and autumn.

I’m hoping the funding will keep us going until the Environmental Land Management scheme is rolled out to all farms, at which point I should be in a good position to transfer straight into one.

However, if this turns out not to be the case, I still have the option of reverting back to a more conventional system, hopefully with healthier soil and a lot less blackgrass.