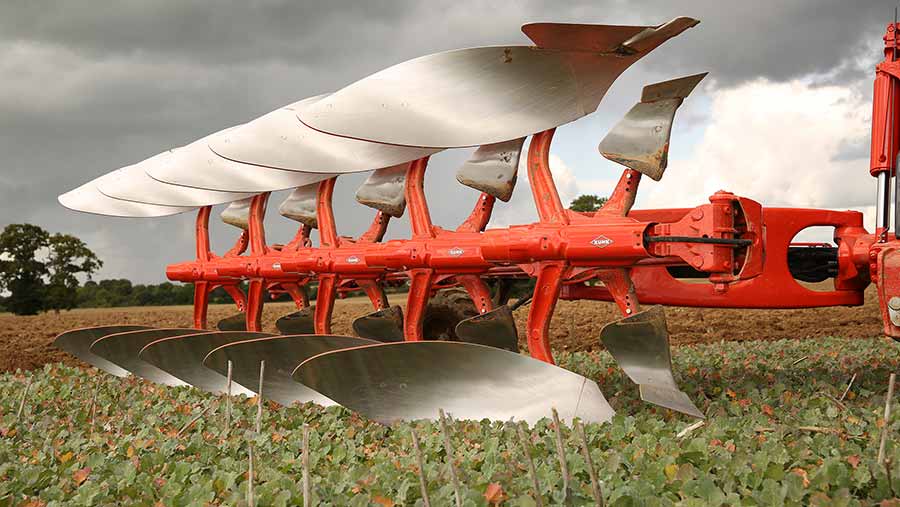 Kuhn has added the Vari-master L-series on-land ploughs to its mounted range.

The new models come in four-, five- or six-furrow versions and are designed to need between 200-300hp up top, while the on-land design reduces the effect of drift caused by offset changes.

Key features on the new models are manually adjustable skimmers that can be tweaked without the need for tools, with standard shearbolt protection for the skimmers having a breakout force of 1,800kg, while all models have an under-beam clearance of 80cm.

Hydraulic front furrow adjustment from 35-55cm is standard on the four models and can have hydraulic depth adjustment as an option, while Kuhn has also added its Non-Stop Hydraulic auto-reset system as standard.

The 3m and 4m models feature two rows of 620mm notched discs capable of working at 50-150mm deep, and can be controlled manually. There is also the option to have hydraulic setup.

A following roller bar can be equipped with a choice of tube or ring rollers, with all discs and rollers mounted on sealed-for-life, no-maintenance bearings.

With the compact nature of the new models, the 3m requires a minimum tug of 105hp on the front, whereas the 4m needs 140hp up top.

The price for a 3m version with Kuhn’s V-liner roller is £19,168, while the larger 4m with the same roller retails for £26,184. However, this model doesn’t fold, so transport width remains at 4m.