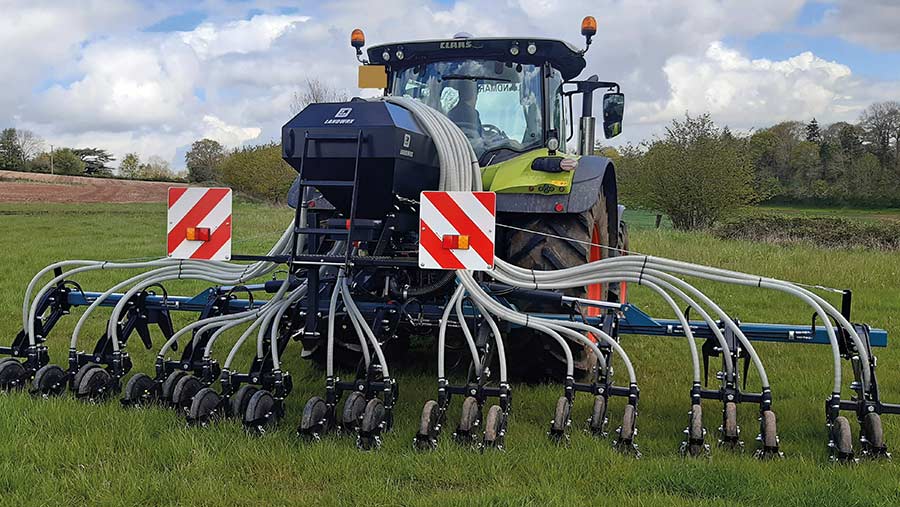 A new purpose-built drill for sowing a catch crop between rows of maize is set to add to the growing list of machines offering this increasingly popular technique.

Designed and built by Herefordshire farmer’s son and ex-Mzuri design engineer Tom Land, the Landwrx Inter Seeder differs from other similar implements in its use of tine coulters.

“I set out to design something that had the ability to actually place seed in the ground and consolidate it,” explains Mr Land.

“I’d seen grass broadcast into standing maize and it was pretty wasteful.

“From the off, I knew my machine needed to place seed accurately to get decent germination rates and also avoid getting too close to the maize rows and risk competing with it.”

He settled on a folding 6m toolbar with coulters grouped in threes carried on parallelogram linkages.

The key advantage of this arrangement is that it enables the openers to accurately follow undulations, rising and falling vertically through their lift arc – but it also provided Mr Land with another opportunity.

“The parallelogram setup meant I could fit each unit with a pressurised hydraulic ram, enabling me to adjust the downforce on the coulters.

“Simply by altering the oil pressure in the circuit, it’s possible to add an additional 20-80kg of downforce.

“That way it can cope with anything from damp, soggy seed-beds to hard-baked clays,” says Mr Land.

“I was conscious that it’s likely to be a contractor’s tool and so I wanted it to be as adaptable as possible. I’ve worked hard to avoid it being a one-trick pony.”

That principle applies in other areas, too. Each coulter can slide on its box-section mounting and the parallelogram units can be adjusted on the main toolbar, enabling operators to set the machine up for different row widths.

Alongside trials in maize with Herefordshire growers and Green Farm Seeds, last summer the evaluation machine was used to drill oilseed rape at 25cm row spacings.

This year the plan is to trial it as a cereal drill alongside a companion crop.

This versatility has another benefit as the units on the outer ends of the toolbar can be lifted out of work to cater for growers switching between crops sown with either six- or eight-row drills.

The tines themselves use 40mm-wide points and are height adjustable so that the Inter Seeder can be used to sow beans and peas down to 50mm.

The coulter tubes are open backed to allow seed to exit at whatever depth the points are set to run at.

A rubber press-wheel follows each opener to close the slot and aid seed-to-soil contact.

Behind this, loops of chain are used to crumble and level off the soil and add a little extra tilth over the top of the seed.

“On my first machine I used zig-zag following harrow tines, but I found that drag chains were actually more effective.

“They might look simple and they are. It’s great because you don’t need to set their angle – they just do their own thing.”

The first unit was fitted with an APV seeder unit, but Mr Land found it too time consuming changing metering rollers and drive gears when swapping to small seeds.

“After last season’s experience, I wanted to build my own hopper that could accurately handle both large and small seeds.

“I used an electrically driven Accord metering unit with a 24-port distribution head so that I knew there was no chance of different outlets getting varying amounts of seed – it was all about accuracy.”

As there is nearly 75m of coulter hoses on the Inter Seeder, Mr Land opted for a hydraulic fan to offer plenty of airflow, ensuring that seed delivery wasn’t an issue.

He found the optimum fan speed to be somewhere around the 1,600rpm mark, which corresponded with the Claas Arion 460 test tractor running at about 1,100rpm.

An RDS Artemis control box linked to a small GPS receiver looks after the metering side of things, making it possible to vary rates from as low as 2kg/ha for crops such as clover, right up to 200kg/ha for wheat.

Prices for the 6m eight-row Landwrx Inter Seeder are likely to start from about £18,000.