Feeding and bedding livestock can be a time-consuming job, but the entries into this year’s Inventions Competition show there are plenty of ways to speed the process up.

Mr Parke’s feed trailer construction started with the main frame and axles, which were paired with wheels from a diet feeder. On this base, he formed two bins with the capacity to carry up to 1,200kg of each ration component – calf starter and a hay mix.

Each hopper has its own 2.4m-long, 130mm-diameter hydraulically driven auger, which is engaged to move a portion of the feed into a front trough. Here, a lateral front auger mixes it up before discharging. 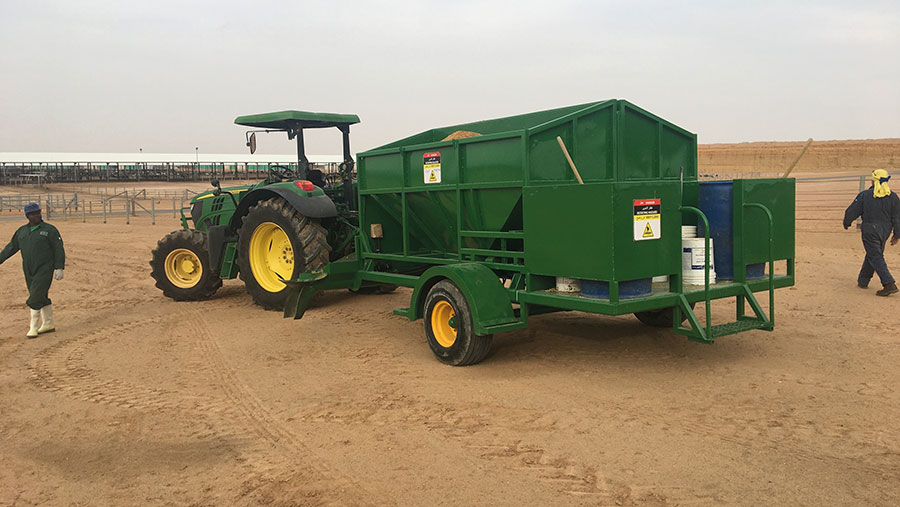 After some trials, Mr Parke also decided to add a beater bar driven via another hydraulic motor to break up any bridges in the main hoppers.

Weigh scales are fitted in the corners of the bins and these talk to a pair of control screens in the tractor, so the operator knows exactly how much is being dished out. Perspex windows also offer some visibility into each bin.

An area at the back of the trailer is used to collect feed left from the previous day to help monitor consumption levels.

After six months in the making, it has since worked daily on the mega dairy.

The design centres around an ATL out-of-parlour feeder mounted on a height-adjustable flatbed trailer. The feeder uses electronic identification tag scanners to dollop the correct-sized portion into one of eight feeding slots as the animal enters. Additional pallets form walls to prevent the cows turning around and others trying to muscle in. 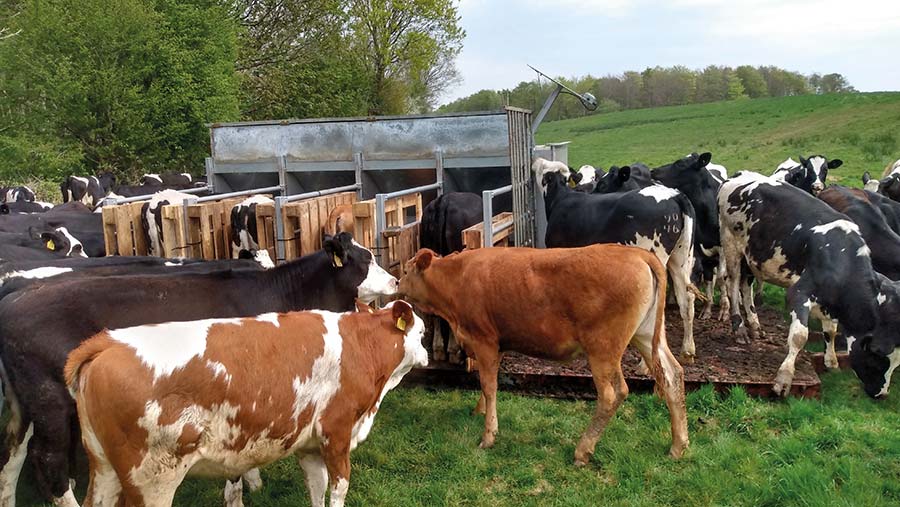 Mr Ford’s original setup featured a small solar panel installed to supply the battery, but he found it wasn’t enough to run the motor on each feed station and the antenna for recognising ear tags.

A bigger panel and second battery were added to boost power reserves and keep the system alive 24 hours a day, and he is able to check it’s still working when he moves the trailer to fresh grass every morning. Unfortunately, the data connection isn’t strong enough to change feeding rations from home.

The low loader trailer cost about £2,000 and the feeder system set Mr Ford back £7,000. With the panels and other ancillary bits bought mainly from eBay, the total build came to just over £10,000.

Shropshire-based Alan Hughes has designed a height-adjustable creep feeder for pigs, sheep and cattle that can prevent badgers stealing the grub and potentially spreading TB.

Height is determined by the position of the telescopic legs and can be set anywhere between 60cm (the minimum required for it to be badger-proof) and 120cm in cattle mode. It can also be fitted with fold-away creep gates.

A simple roller on the front edge of the feeding slots is designed to prevent badgers reaching the trough. The hopper holds between 500-700kg of feed, with the rate changed by feed slides in the bottom. Pallet tine slots underneath make it easy to shift around.

Mr Hughes plans to start selling the feeder to farmers later this year.

Sick of being kicked and bumped by boisterous cows, John Green decided to develop a feeding device that would allow him to dish out the grub and watch the carnage unfold from the safety of his tractor cab. 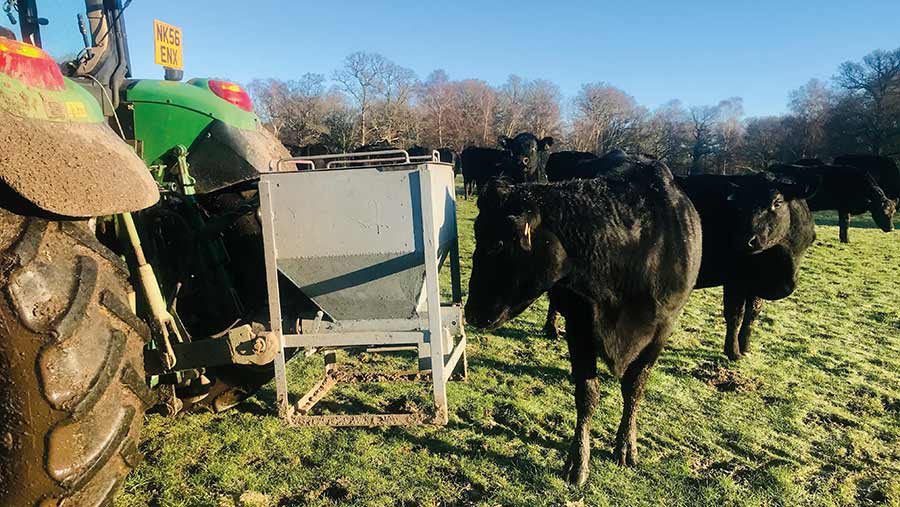 The hopper dispenses cattle rolls through a 50cm-long auger driven by a low-speed hydraulic motor. Feed output is controlled by the forward speed of the tractor and engine revs that dictate oil flow to the motor. Using hydraulics rather than pto drive also means it can be run on the front-end loader.

It has a capacity of 100kg and also has brackets that can be adapted for feeding sideways into troughs.

Pembrokeshire farmer Glyn Jones made handy use of an old trailed forager auger by adapting it to push up and mix silage along a feed barrier.

One of the first jobs was to replace half of the flights on the 1.5m-wide New Holland 717 Super auger so that the material is pushed to the right of the machine – rather than corralling it into the centre, as would have been the case when it was mounted on the forager. A blade at the bottom scrapes up any scraps missed by the auger flights. 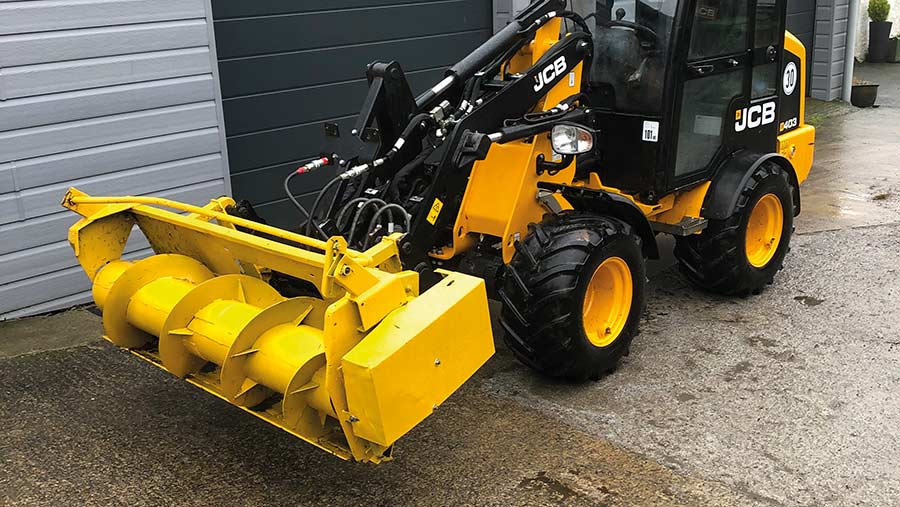 It mounts via euro brackets to a JCB 403 loader, which provides a hydraulic supply to a single hydraulic motor that in turn runs a chain drive to the auger.

Somerset farmer Katy Alvis made a straw feeder from a large blue drum. It sits over a gate so can’t be thrown around by unruly animals, holds enough straw for about a week and can feed two lots of calves as it straddles gates dividing the pens.

Another of her simple inventions involved cutting one side out of a 25-litre drum and adding a length of water pipe so she could mount a roll of blue paper inside, keeping it dry and safe from inquisitive cows. She hangs the container on gates within reach of the artificial insemination race.

She also turned two 25-litre drums into cake feeders that sit over a gate away from the floor and dirt. A simple wooden brace at the top holds them together and provides extra strength. 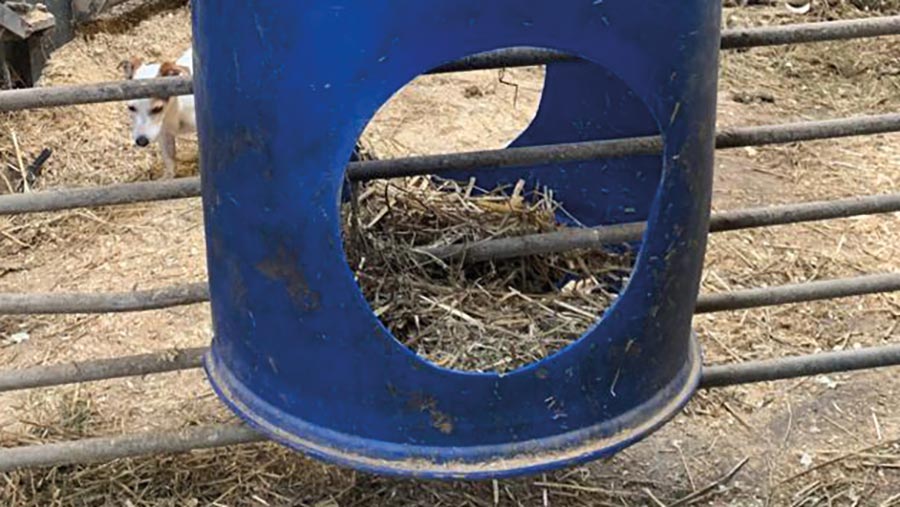 Feeding stock when the ground is too wet for a tractor inspired Paul Yates to build a round bale carrier that he can tow behind his Kawasaki Mule UTV.

It is made from scrap metal he had on the farm, including a scaffolding tube, mesh and the mudguards from an old baler. The sprung locking pin that releases the carrier to stand the bale on its end was pinched from a trailer he already owned. 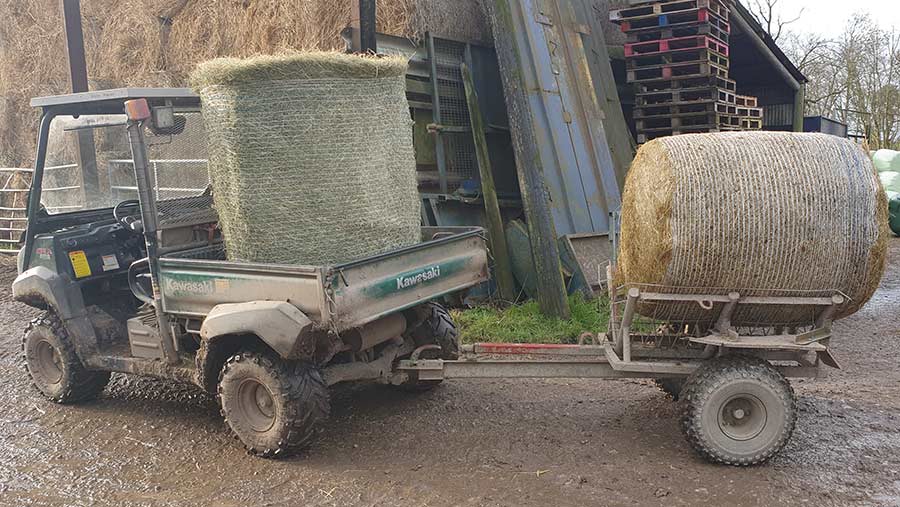 The only outlay was about £60 on a kit that included stub axles, wheels and the hitch. He reckons the hardest part of the job was getting the right weight balance on the drawbar for a smooth journey.

County Londonderry farmer David Boyd built a smart meal bin for the front of his John Deere loader tractor to speed up the cattle feeding round.

The galvanised 1t hopper has euro brackets for his loader and a shroud around the discharge chute to hold a bucket and stop gusts of wind blowing the meal. He says it beats using a wheelbarrow. 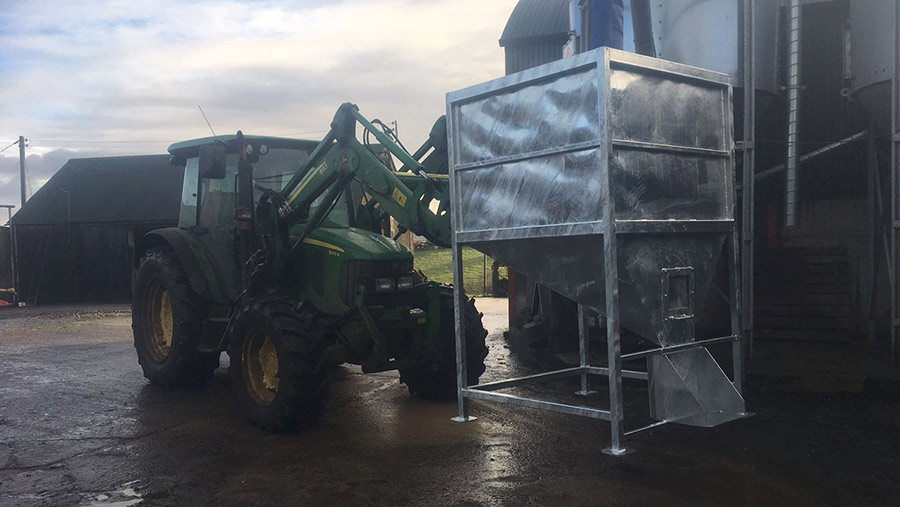 In a bid to speed up the process of filling pheasant feed bags, Laura Dunford and her dad, Nick, converted a redundant grain bucket by fitting a £39 chute that allows them to trickle the material from a central door. 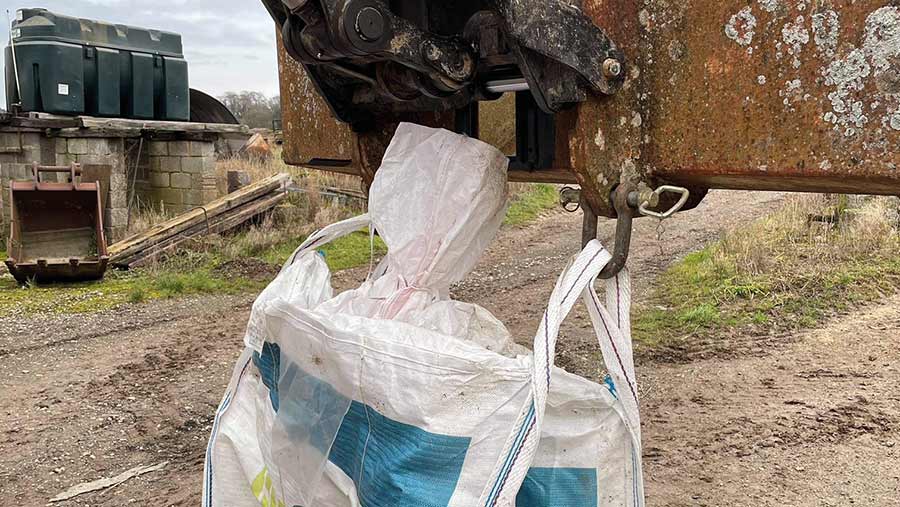 A simple bar-and-hook attachment welded to the yard scraper arm allows Brian Scott to pick up a ring feeder so that he can scrape away leftover forage without having to fetch another tractor. 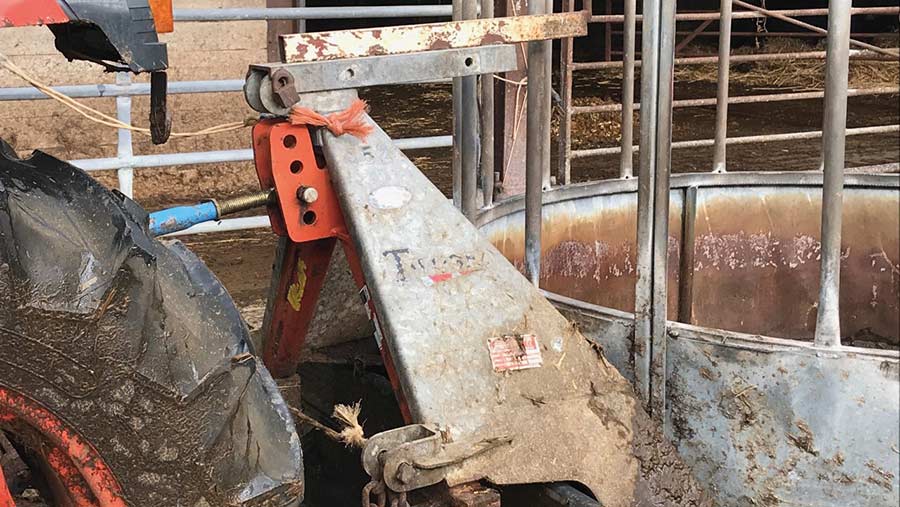 The machine has a 60kg hopper and discharges via an auger that winds the contents onto a spreader plate at the rear. The auger is driven by an electric motor and there is a switch on the handlebars of the quad to engage and disengage drive.

Mr Smith has also incorporated a variable-speed controller for the auger, which allows infinite rate adjustment up to 12kg/min. 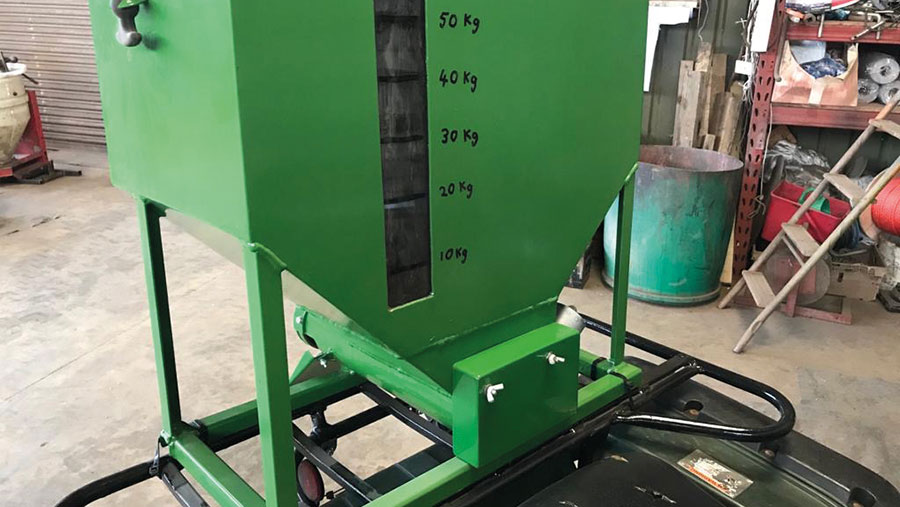 Bruce Eddy has come up with a neat automatic feeder for smallholders with a few animals they need to feed while they’re away from home.

The implement is essentially a trough with compartments above that allow the user to place two separate feed portions in at once – the second set to release up to 12 hours after the first. 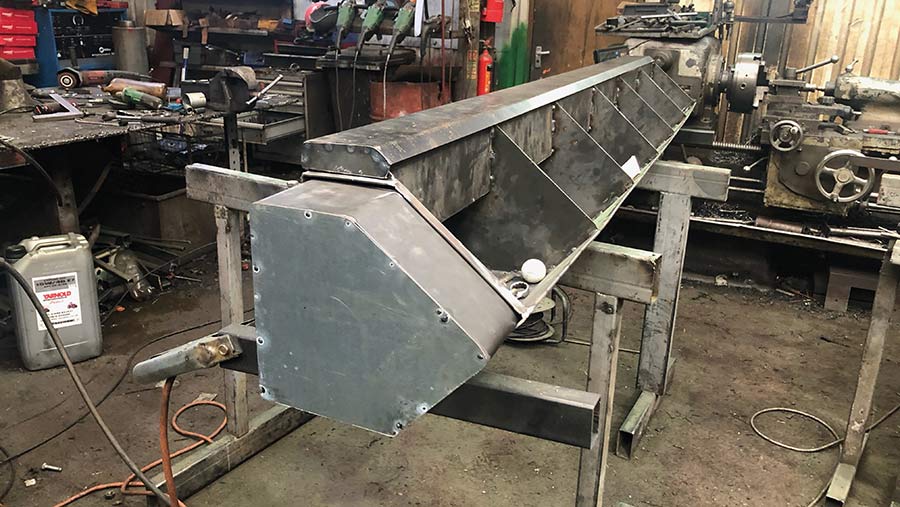 It is set using a manual, dial-adjusted timer, and when the allotted feeding time is reached, this triggers flaps at the base of the compartment to drop, letting the feed fall in.

No electronics are involved, meaning the feeder can be placed in any location. It’s been thoroughly tested and has been sent off to be galvanised.

Peter Sharland’s calf-rearing business gets through some 300t of straw/year, so to reduce his workload and make the bedding go further, he decided to buy a straw spreader for his skid-steer loader.

When he failed to find a suitable machine, he built his own instead. The tool has a simple frame with a hydraulic lifting rear section that houses a pair of spreading rotors. The rotors are powered by two hydraulic motors and they spin anticlockwise to distribute the straw. 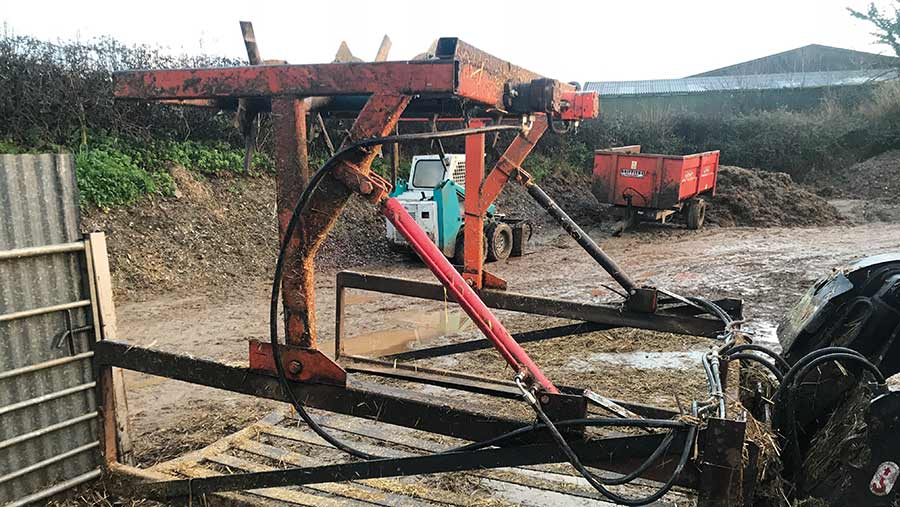 It can spread square and round bales and Mr Sharland fitted a diverter on the headstock to switch between spreading and lifting the rear of the frame for easier loading.

Richard Leighfield made use of an old wheelbarrow and grass seeder to make a cubicle lime spreader. It’s powered by a quad bike battery and holds a 25kg bag of lime, which is enough for 120 cubicles. 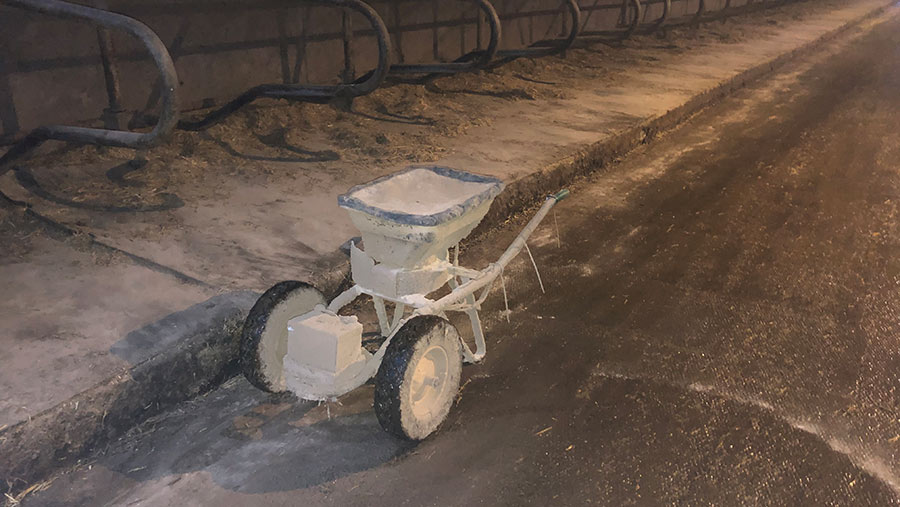