A new weed mower that cuts off seed heads and carts them out of the crop could accelerate interest in mechanical intervention for weed control in organic and conventionally grown crops.

The concept for what is now dubbed the Top Cut Collect came from cereals grower Romain Bouillé, who farms 200ha east of Paris in the Seine and Marne region of northern France.

He developed the 18m-wide machine after trialling a cutterbar suspended from the front-mounted boom of his self-propelled sprayer.

That led to the current design, which is trailed and has a wide double-knife cutterbar with PVC conveyors positioned behind it that transport the mown material to a central conveyor, where it is elevated into a large hopper. 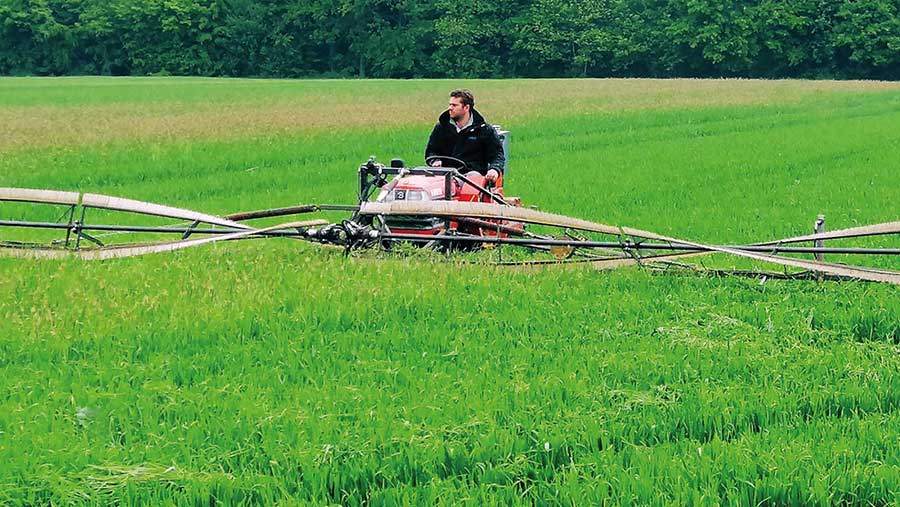 Removing the material in this way means the weed mowing technique can be employed later in the season after tall weeds have produced viable seed.

No in-crop mowing technique will remove all weed heads but the aim is to take out sufficient to reduce the seed bank over time.

Mr Bouillé says: “I created this machine in 2015 to solve a problem of blackgrass resistance to herbicides in conventional crop cultivation.

“Since then I have done a lot of contracting work with organic and conventional farmers in my region, between 1,000ha and 2,000ha per year in all kinds of crops, including wheat, barley, beets, potato, flax and lentil. The machine works for various weeds such as ryegrass and thistle, and is quite versatile.”

In addition to his own contract service workload, Mr Bouillé has built and supplied a machine to the contracting arm of the Noriap farmer co-operative in the Somme region of northern France. 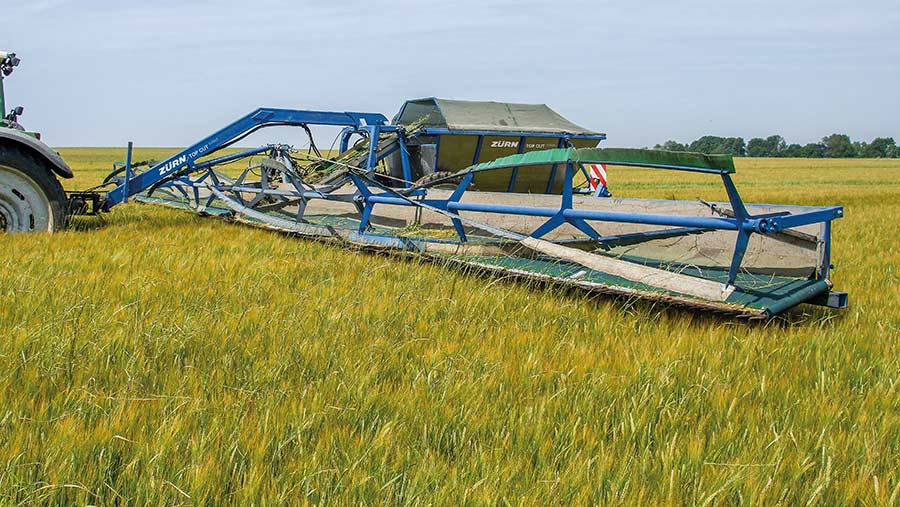 The 12m Bouillé cutter was acquired in response to growers wanting to use fewer herbicide treatments and is operated by a tractor on row-crop wheels with satellite-guided auto-steering.

It has been used in seed crops of ryegrass, in wheat and potatoes, and in sugar beet to tackle bolters and weed beet, with as many as three passes being conducted by some growers to minimise seed return in their crops.

Other projects include a cutting-only 9m cutterbar topper mounted on a high-clearance compact tractor, and a self-propelled mower/collector based on a Bourgoin maize cob harvester.

However, for commercial production of the trailed cutter-collector, Mr Bouillé now has an agreement with German manufacturer Zurn Harvesting to produce the machine as the Top Cut Collect. 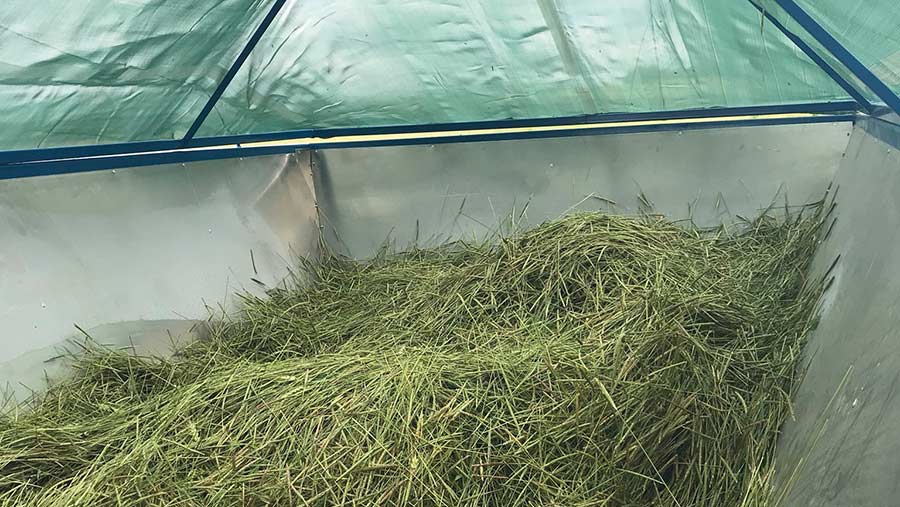 Collecting the cut material for disposal means the weed mowing technique can continue to be employed after seeds have become viable.

It is available in widths of 9m and 12m (with plans for an 18m version) using two knife and conveyor sections that fold gullwing-fashion to a travel width of just 3m.

At the centre, an upward-angled conveyor delivers the cut material into a covered hopper of approximately 4cu m or 1t capacity, positioned aft of an axle running 44in row crop wheels.

The high-lift hopper can be emptied on to a headland area by hydraulic tipping cylinders and the tractor operating the device needs to have load-sensing hydraulics delivering at least 80 litres/min at 180bar to operate the cutterbar drive motors.

Cutting height is adjustable between 350mm and 1.5m above the ground to cater for different crops, and a typical working speed is said to be 5-8kph, or up to 10kph in relatively smooth field conditions. Good stability is obviously important to avoid the wide wing sections dipping into the crop.

Rolf Zurn, managing director at combine header specialist Zurn Harvesting, describes the Crop Cut Collect as “an intelligent combination of two tasks – cutting the weed tops above the crop and collecting this material, which contains the weed seeds”.

He says: “Different scientific studies in France show that up to 40% of grass weed seeds are shed on the ground before harvest, so it is effective to cut off and collect the tops of these weeds before harvesting.

“By doing this, the cycle of weeds adding to the seed bank is interrupted and hygiene in the field is improved sustainably by reducing the weed seed bank in the soil.”

He makes the further point that as the weed plants die off after cutting, badly infested crops are made easier to cut and thresh without resorting to a pre-harvest chemical treatment.

A number of in-crop cutting devices have been developed over the past decade, ideally for use before weeds produce viable seeds, as growers – organic and conventional – take more interest in techniques that reduce herbicide use.

Originally developed for cutting bolters in sugar beet, the Weed Surfer, built by CTM at Harpley in Norfolk, has since been adopted by organic growers as a tool for reducing weed seed return in a range of crops.

“The Weed Surfer is a very flexible tool and most recently has been used in the fight against blackgrass in conventional crops,” says Nigel Mountain of CTM. 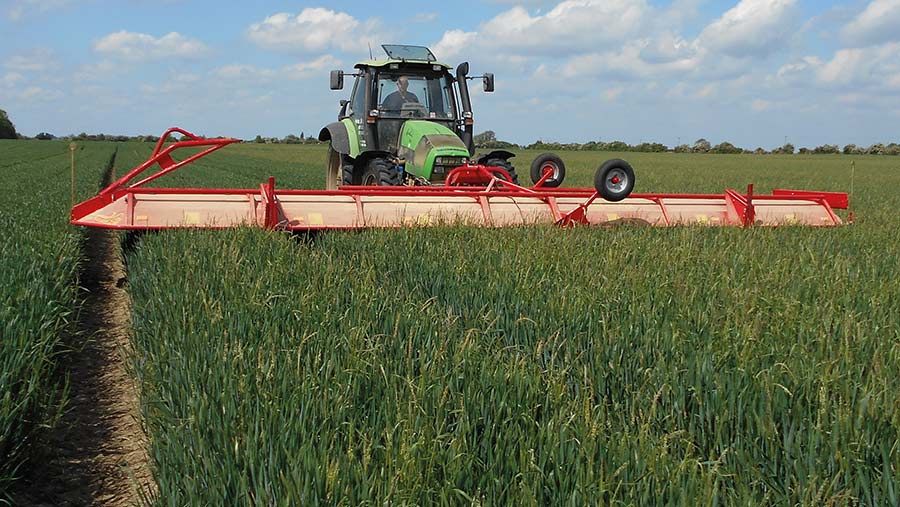 The CTM cutter surfing a crop of wheat to reduce blackgrass seed return.

“However, there is a list as long as your arm for the uses our customers have contrived, from topping out and promoting growth in pulses and setting peas, to defoliating pumpkins.”

The tractor-mounted device, which is supported on mechanically or hydraulically adjusted wheels, has a series of large diameter four-blade rotors driven from above by a continuous shaft and gearbox drivetrain.

The standard 300mm cutting height is adjustable to a maximum of 850mm, or 1m with the addition of extension brackets.

“This enables the Weed Surfer to tackle weed beet in sugar beet and also extended weed growth in a variety of organic crops such as beans and cereals,” says Mr Mountain.

“Users have successfully operated it on wild oats in wheat and barley, thistles in beans and peas, and also for topping out plants to increase yield and tackle black fly infestation.”

To fit controlled traffic systems and meet demand for greater output, CTM is set to trial a folding 12.8m version of the device.

Produced in six working widths from 4.4m to 13.2m, the implement has individual hydraulic motors for each blade rotor. 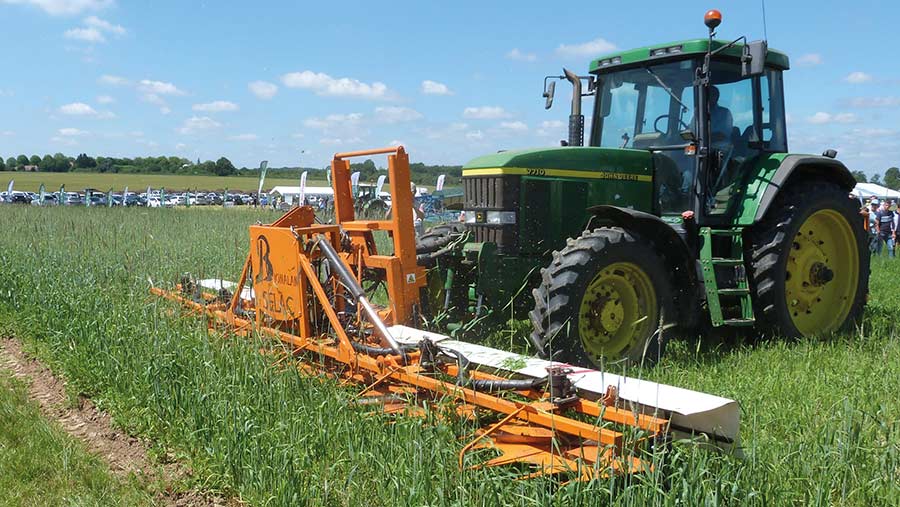 Hydraulic drive to four-blade rotors is a feature of the Selac topper from Bionalan.

Fold-up wing sections supported on adjustable gauge wheels regulate cutting heights from 150mm to 1.8m, while suspension on the central mounting frame aims to keep the cutting sections as stable as possible.

Another manufacturer in France – ETR Breton – uses hydraulic motors to drive the rotors on its Topper implement, each rotor being fitted with four boomerang-shaped stainless steel blades housed beneath a stainless hood. 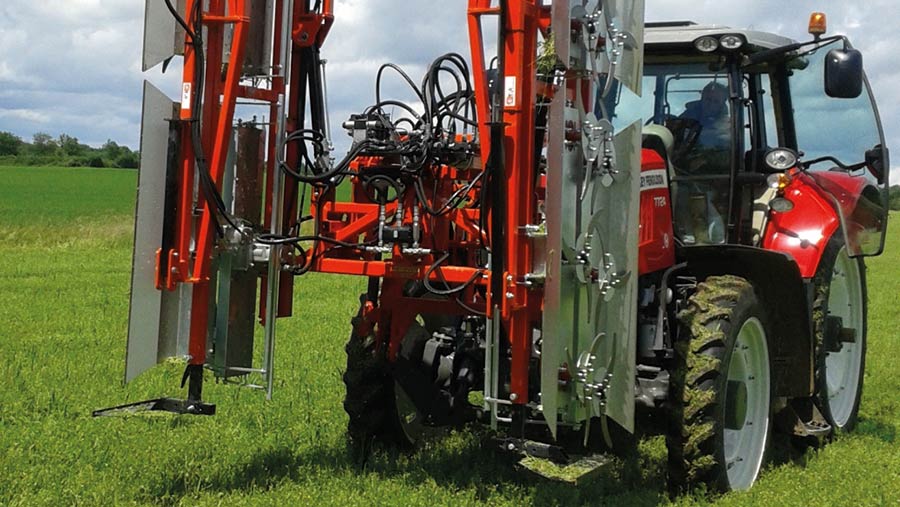 There is a manually-folded 4.7m model, two-section hydraulic folding 6.3m and 8.3m versions, and 9.4m and 12.5m sizes with outer sections that fold horizontally and then upwards for a more compact 2.2m-wide transport configuration.

This rotary cutting device built by Meneguzzo in Italy has hydraulic drive from two motors transferred by toothed belts to the star-shaped rotors, on which each of the four tips has a single cutterbar knife blade. 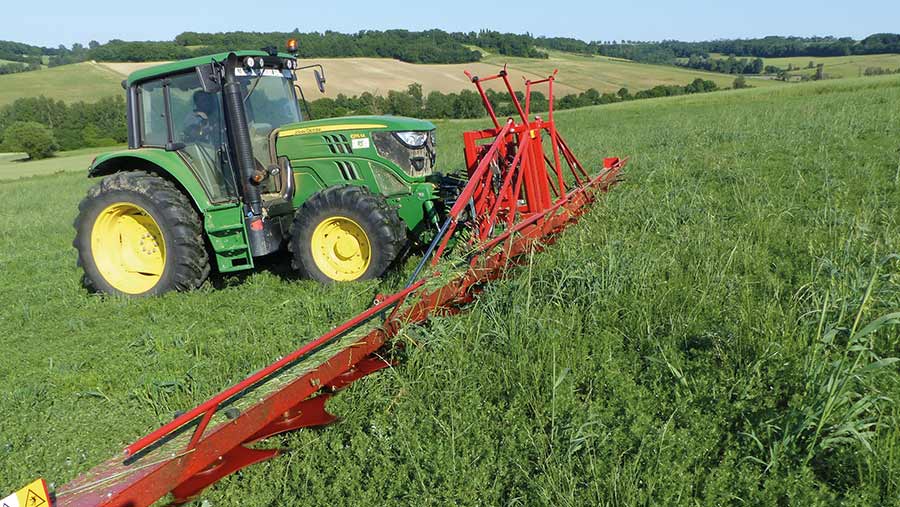 A Meneguzzo LOP series topper cleaning a crop of lentils.

The modular design, developed with the support of Micheletti, the distributor in France and several other European countries, starts with a 6.5m wing-folding unit to which extensions can be added for 8.8m and 12.1m cutting widths.

A frame with mechanical pendulum suspension attaches the machine to the tractor, with wing section end wheels available for working in low crops.

Strimmer-like rotors are used on the W-Cutter, built in Finland by W-Cult, but the two “filaments” in this case are thin steel chains that flail their way through weeds protruding above the crop. 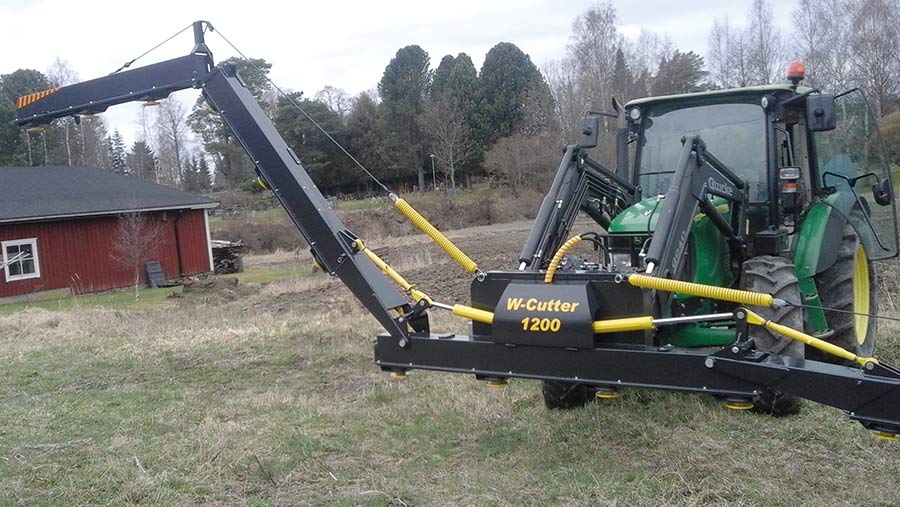 Each rotor is driven by an electric motor, so a 35-45kVa power source is needed – usually a rear-mounted pto-driven generator – and the cutting heads can be switched on and off in sections.

In Germany, BB Umwelttechnik manufactures a selection of Seco Duplex double-knife cutterbar mowers for grass harvesting in alpine and other hilly land situations. 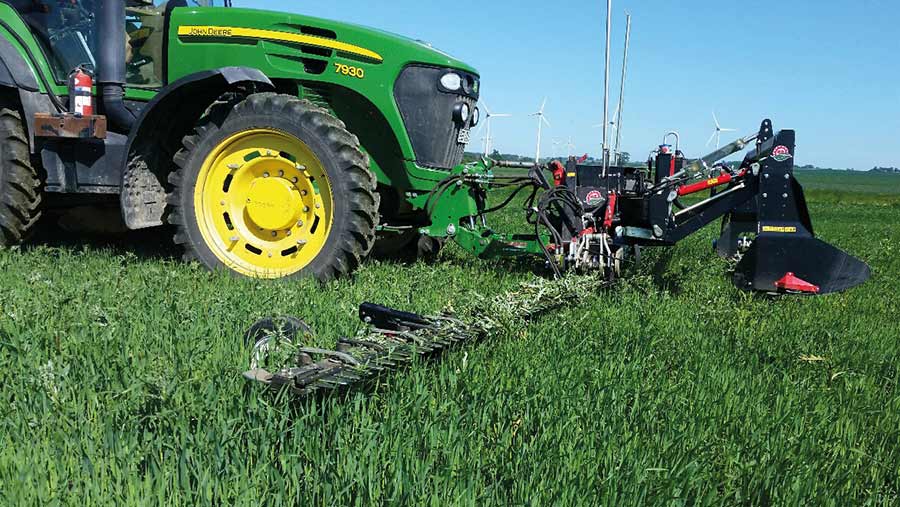 The triple-section reciprocating cutterbar mower from BB – Umwelttechnik can reach a cutting height of 950mm.

Arable crop growers have adopted the larger model, with working widths from 7m to 9.5m, for in-crop weed control.

The machine comes in three sections, with all three mounted up front or in a front/rear configuration, and with the wing sections supported on adjustable gauge wheels for cuttings heights between 250mm and 950mm.

Swedish manufacturer Lyckegard takes a different approach to weed cutting, aiming primarily at grassland and cereal crops at an early stage of growth, to minimise competition and diminish weed populations over time.

The CombCut has no powered elements; instead, it relies on forward motion and a hydraulically-driven sweeping brush reel to slice through weed stems using a series of static knives arranged within a comb-like structure. 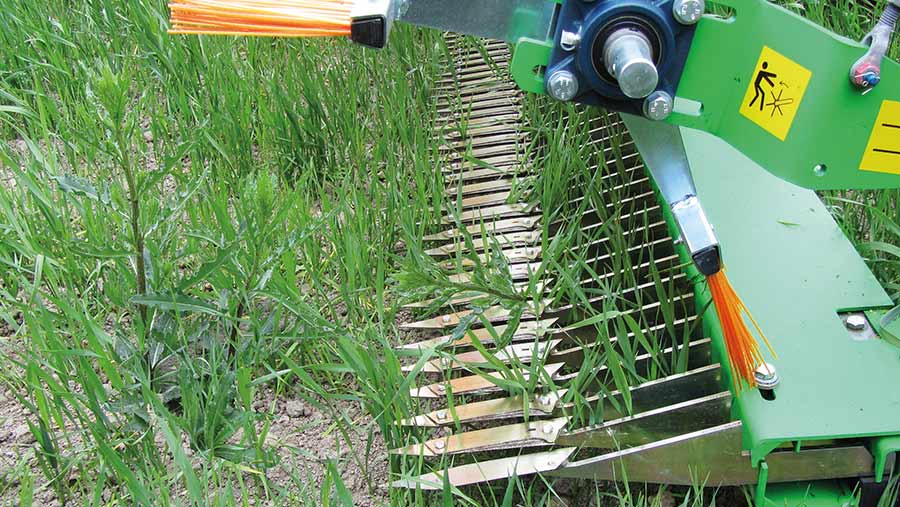 The open-ended design allows the wispy leaves of grass and juvenile cereals and other crops to pass through, but thick-stemmed weeds such as thistles, docks and so on are trapped and sliced.

The machine is distributed in the UK by Norfolk grower William Hudson with the support of Primewest in Oxfordshire.

“It’s a very good tool in permanent pasture because you can go through once a month while the grass is growing and deplete the weed population over time,” suggests Mr Hudson.

“It also works well in cereals at early growth stages – there’s a four- to six-week period when the CombCut can be used, but beyond internodal extension, the crop stems become a bit too stiff.”

Wild oats, charlock, thistle, runch and so on would be the principal targets, effectively sliced off at a working speed of 10-15kph.