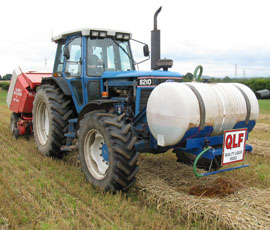 A simple, homemade applicator has given one Staffordshire farmer an effective way of getting molasses-based liquid feed on to wholecrop wheat.

Stan Prince has a 100-head beef unit and farm shop at Kings Bromley near Lichfield. He buys in continental or Hereford cross stores at six-eight months old and finishes them at about 650kg.

Feed costs are kept down by maximising home-produced forage and cereals and adding QLF HiPro 60 high-protein liquid feeds to the ration. However, with his mixer wagon past its sell-by date, he wanted an easier way to get the liquid feed into the ration.

A winner of more than one Farmers Weekly farm inventions competition over the years, Mr Prince reckoned he could build something himself. His plan was to put the molasses into the bale in the field while baling the wholecrop wheat.

A front-mounted sprayer, plus parts from a Shelbourne Reynolds swather, were bought from farm sales. Fitted to the front of the tractor, the applicator bar puts the liquid feed on to the swath at an application rate of 40 litres/350kg bale, metering it through a variable-rate centrifugal pump linked to ground speed.

The wholecrop wheat was cut at 40% dry matter (the soft cheddar stage) in 2012 and was left to wilt on the ground for 24 hours to let the straw dry out. The bales were stored from July and fed from the end of November to give time for fermentation.

Mr Prince said the straw had degraded well and feed quality was good. He reckoned it was a more economic way of doing the job than his previous system and required minimal labour input.