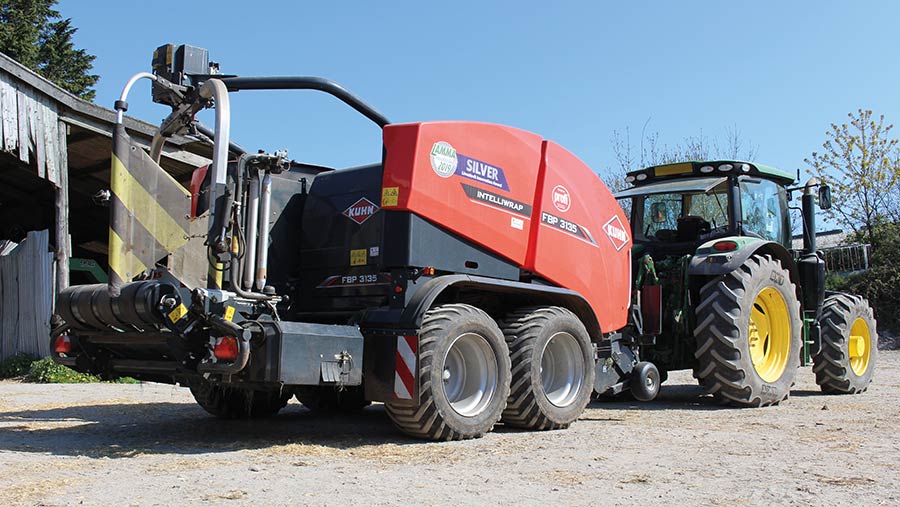 We head to Devon to meet farmer and contractor Martin Rosewell, of Chelson Farm Contractors, Salcombe Regis, who tells all about the performance of his ex-demo Kuhn FBP 3135 Intelliwrap.

See also: How to sort out grassland compaction

What made you choose a Kuhn FBP 3135 Intelliwrap?

We have been running a baler-wrapper combination machine for the past seven years – first a McHale Fusion 1, followed by the Fusion 2.

However, last year we had a demo of the Kuhn FBP 3135 Intelliwrap from our dealer, Beares at Stoke Canon, and were so impressed we ended up keeping it and trading in our Fusion.

We were keen to explore the film-on-film option, as we had a few customers who wanted us to do it – dealing with one waste product is easier for them, and it may allow us to use less wrap in the future. 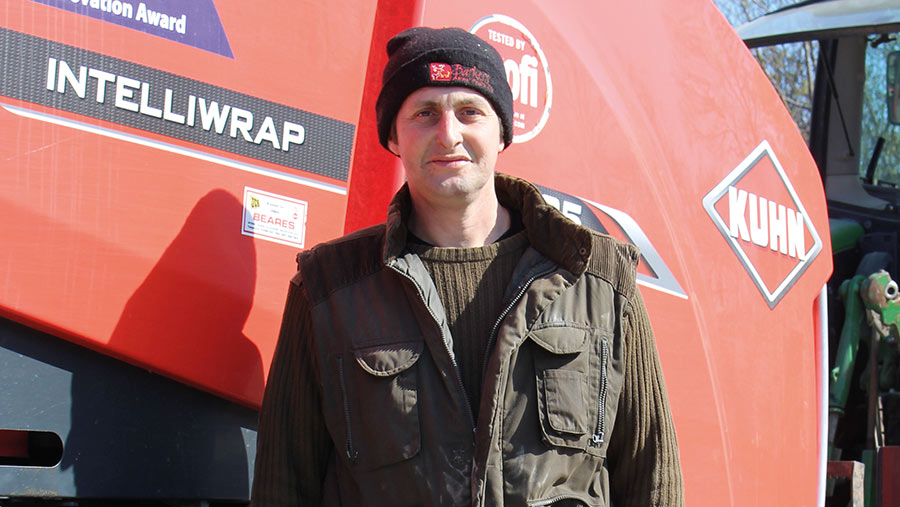 The biggest difference to the Fusion is output. Don’t get me wrong, we liked the Fusion and it served us well, but we had to slow down in big swathes compared with the Kuhn.

I haven’t found anything that stops me yet, including one of our customers who uses a merger grouping six rows into one – I’ve tried to block it, but the FBP just keeps going.

We used to find our Fusion had a habit of knotting up in the corners around the side augers, but Kuhn’s side feed augers are built as part of the rotor and that seems to really benefit crop flow.

We can cruise along at about 8/9kph with the chopping deck engaged, which is much faster than before.

A clever addition is the auto drop floor, which kicks into action when the intake becomes overwhelmed by the amount of crop.

It lowers the floor and raises the knife section to allow unrestricted entry – I get a warning on the screen to tell me it has happened, and it has no doubt saved a full unblock a few times.

The pick-up also disengages to let the backlog clear.

We average about 45 bales an hour, but are hampered by a typical field size of 6ha here in Devon, so there are plenty of headlands and short runs to slow us down.

The film on film is a big advantage and has helped us attract a few new customers. It took a little bit of getting used to, but creates a much tighter seal than a net.

We still tend to put five layers on with the wrapper, but lower this to four in some cases.

Handily, Kuhn has stuck with the 750mm rolls for both the wrapper and binding, which means we don’t have to carry any awkward longer rolls.

The two wrap spools are at the front of the chamber and turn 90deg before being pulled in to put three layers around the middle of the bale.

We get 125 bales from the two binding spools and can carry 14 rolls in total. There is a net wrap option, too, as we still have some customers who prefer that method.

It is all controlled from the box in the cab. We can change density, wrap layers and chopping just from the press of a button.

We have the Opticut 14-knife pack, which allows us to run four, seven or 14 knives at once. We tend to run with seven, so there is a spare bank ready to go when the originals get blunt.

We probably chop 50% of the time and seven knives cut to a length of roughly 75mm. In peak season, I’ll usually sharpen them once a week, which takes about five minutes a blade. 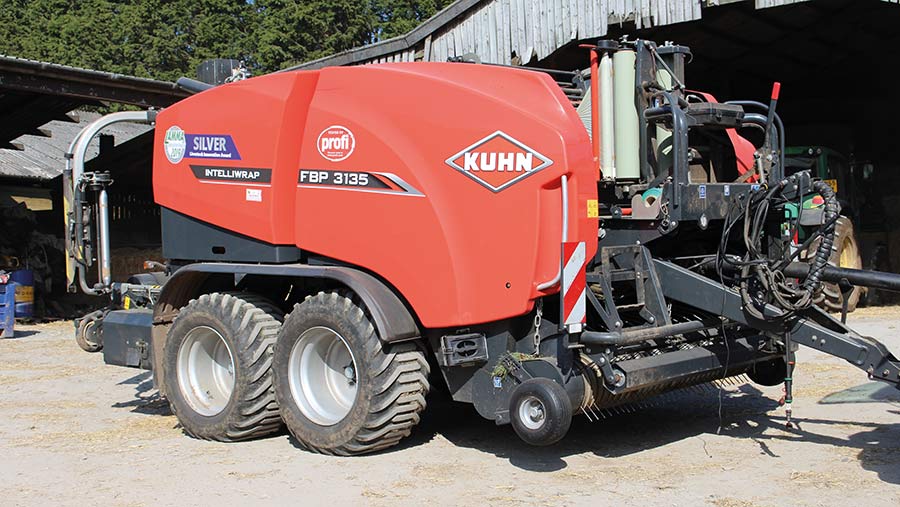 The film on film has given the bales a much better shape and I have to be careful where I drop them, as a gentle slope can have them running away.

There is no doubt we now produce a tighter bale, as the wrap can be stretched further than the net and we tend to set the density just below maximum.

I use a John Deere 6155R, which has ample grunt for the job – we don’t have to slow down, even when chopping.

We had a little niggle at the start as one of the two guides that feed wrap into the chamber caused the plastic to get snagged around a roller.

It turned out that the guide had been bent before we took delivery, so a quick straighten was all that was needed, and there haven’t been any issues since.

The transfer of the bales from the chamber to the wrapper isn’t the quickest, as the bale lands on the bar and is then flipped to the wrapping bed – a process that could definitely be a little speedier.

However, the wrapper spins at about 50rpm, which is quicker than most, so it makes up for a bit of lost time.

We’ll have another one and I don’t think I’d go back to a Fusion now, purely based on output. We usually run our round balers to 70,000 bales, so hopefully we’ll keep this for a few years yet.