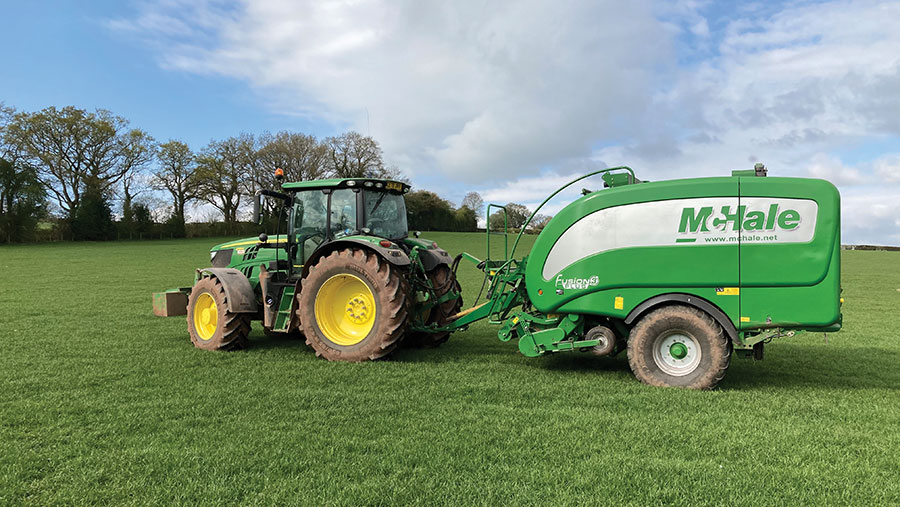 We get the lowdown on the McHale Fusion 3 Plus baler-wrapper run by Powys contractor Paul Brute of DS, DA & PD Brute, Gwndwnwal Farm, Llan-Talyllyn, Brecon.

What made you choose a McHale baler-wrapper?

We have stuck with McHale and our local dealer Western Farm Services since switching from John Deere belt balers to Fusions in 2003.

We had one of the first Fusion 2 Plus film-on-film baler-wrappers in the country in 2013. That gave us a taste of film-only wrapping and we haven’t looked back – compression is better, bales are heavier, and there is less spoilage.

The 7in touchscreen control box is now pretty sophisticated and we can endlessly play with the wrap settings and bale densities. Though we have the option of running through Isobus, I don’t want to restrict my tractor options, particularly as we quite often give the oldies a run out.

Our 2018 and 2020 models have twin cameras as standard and they are vital, as film-on-film wrapping isn’t without its challenges.

See also: What to look for when buying a used McHale Fusion baler 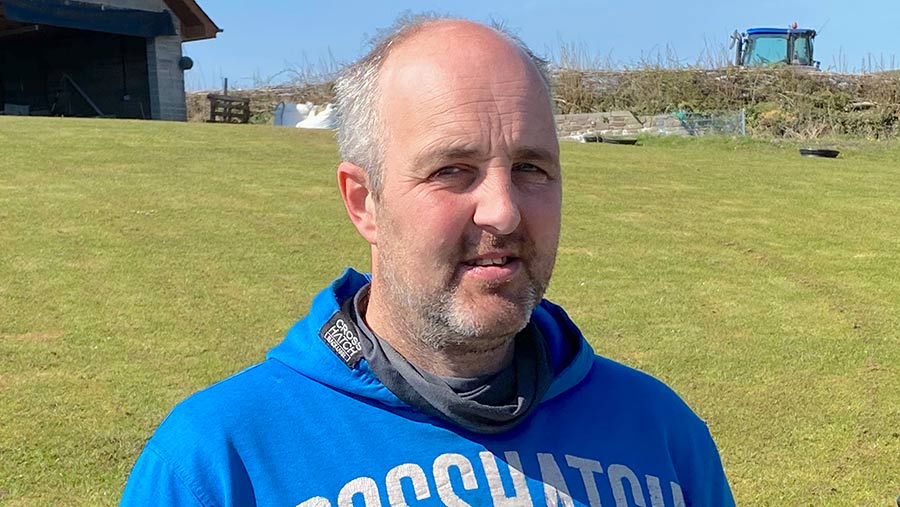 We average up to 55 bales/hour on neatly raked 1.2m-wide rows where we can travel 10-12kph. However, it’s a lot slower on anything prepared with a single rotor rake or haybob because it takes so much effort to form a decent bale.

I keep threatening to charge those customers extra – it’s a pain weaving back and forth and most of the crop still ends up going through the middle of the pick-up.

Output is also limited by the speed of the wrapper – it takes about 30 seconds to apply six layers – plus the fact that I like the drivers to be stationary when discharging to avoid scuffing the wrap.

One of the biggest improvements McHale made was switching from four to five tine bars on the pick-up. It handles lumps much better, particularly when customers have rushed through with the tedder and failed to shake the grass out properly.

Those conditions also wear the knives out quicker – we run with half a bank, which chops to about 60mm. This makes a tight bale and most of our customers have feeder-bedders that handle the short material better.

The cattle don’t waste as much, either, although we still have quite a few customers who don’t want to pay the extra 50p/bale we charge.

The blades get sharpened every 1,000 bales or so and, because we only run half a set, we can swap them in and out to save any down time. It’s worth doing, as you can really notice the tractor working harder if the blades are blunt.

We are putting three-and-a-half layers of barrel film on silage bales, and it’s a thicker grade to the stuff used on the wrapper.

It compresses and holds the bale much tighter than a couple of wraps of net, which has a habit of slipping open and letting air in when the bale is chucked onto the wrapping unit.

Adas ran some trials here a few years ago and found there was up to 15% less silage waste with film-wrapped bales.

It might be 50p/bale dearer for plastic rather than net, but the higher quality easily makes that pay. However, the system requires a good operator.

The barrel wrap has a habit of catching around the roller if the driver stops as soon as the buzzer goes off, so carrying on for just an extra metre or so makes sure the plastic bites into the bale.

It would be nice to have a bit more storage capacity for grease cartridges, chain oil and wrap. I once made a carrier for the tractor’s front linkage, but we found the sun warmed and softened the plastic, meaning it stretched as it was applied and went on thinner.

We’ve also found the door opens a lot when baling dry wholecrop, making it difficult to get the film to go around the bale. In those situations, we tweak the settings on the door sensor to only allow for minimal pressure.

McHale has addressed most of the other shortcomings. The chassis design is much better, so the grass no longer hooks on the axle, which used to eventually stop the door from closing.

The transfer system has also been improved – the bale is now made quite high in the chamber, so is much easier to shift onto the wrapper, even when going down a slope.

The 2018 model will be replaced for the same again at the end of the year. Though we usually run each one for two years, I don’t mind keeping them for longer – they’d probably be good for 80,000 bales if necessary.