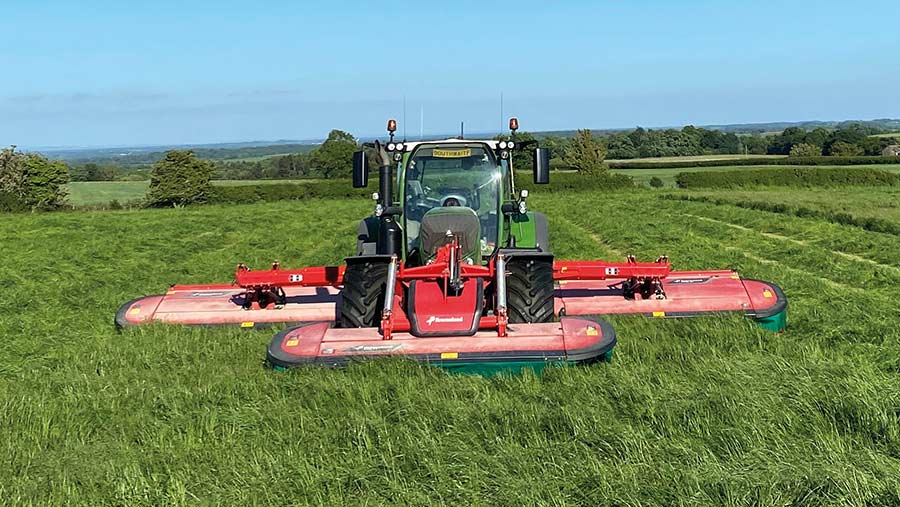 We find out about the Kverneland triple mo-cos run by Yorkshire farmers and contractors WD Douthwaite and Partners. The driver is James Douthwaite. 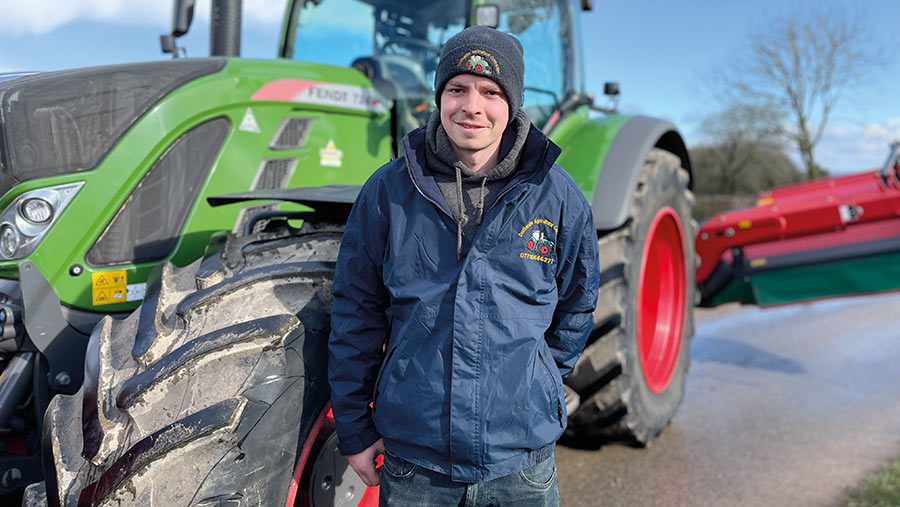 What made you choose a Kverneland triple mower?

We had been running a 3.2m trailed Vicon, which was a brilliant machine, but it had nowhere near enough output to cope with the amount of mowing work we’d picked up.

With about 800ha to cover, and more on the cards, we decided to go the whole hog and upgrade to a large set of triples.

A few dealers sent out models for us to try, including Fendt, Krone, John Deere, Pottinger and Vicon.

Krone and John Deere were probably our favourites, followed closely by Vicon, which was a far more affordable option.

We were ready to do a deal on a set that our local dealer, Farmstar, had in stock, but they were sold just before we got there.

The price to order another set was considerably higher for some reason, but the same mowers in Kverneland branding were substantially cheaper, which is why we went for them.

et of triples is that we already had a Fendt 724 on the farm that was able to run them.

It handles the mowers well, it’s a lovely machine to drive, and we really like the fact you can control the mower functions on the joystick via Isobus.

Generally, we have the butterfly beds set in the mid-side-shift position, and the 724 has enough power to pull them uphill at 10-12kph.

However, if we’re working in a heavy crop with the beds pushed out, there is not a lot of extra power to play with.

If money was no object, we would love to have them on an 828 but, then again, that’s not such a versatile tractor for other jobs.

The only complaint we have about the 724 is the quality of the paint. Since Fendt switched to the brighter shade of green, the finish has been nowhere near as good quality.

Our tractor is a 2019 model, but the steps are already going rusty and there are spots coming through on the bonnet, too.

I’ve seen several others like it, so it’s not isolated to our tractor.

How have they performed?

The performance of the mowers has been good so far, but we did have a slight teething problem when we first got them.

Thanks to a leaking oil block, we hooked up to them but couldn’t get them to fold out.

With a customer leaning on us hard to get the job done, we ended up cutting with the front only until they were fixed. Thankfully, nothing has gone wrong since.

Considering they’re such a big set of mowers, they handle well, and the suspension system does an excellent job of following ground contours.

The front is a pull-type mower with a coil spring arrangement and the rear has a hydraulic setup with adjustable pressure.

Unlike some systems that need to be set with a spool valve, we can tweak the settings in the Isobus screen to get it running the way we want.

This makes them glide better over the bumps and avoids bashing the beds about.

The front is adjusted manually, but it doesn’t take long to wind the springs off a bit before going into a ridge-and-furrow field.

As for the beds, these seem well constructed with plenty of metal in place and good-quality knives that have a simple quick-release system.

The steel tine conditioner also works well – we tend to set it in the middle position, running at the faster 1,000rpm speed.

When folded for transport, they’re surprisingly neat and we’re able to get into some small field entrances, although there are a couple where we need to reverse in.

There isn’t much to complain about, but it would be handy to have hydraulic side guards so we don’t have to hop off the seat when moving between small fields.

It sounds trivial, but with average field sizes about 4ha in our area, it would be a considerable time saving.

We’re also planning to buy a hydraulic connection so the front mowers will lift automatically with the rears through Isobus, rather than being on a separate spool.

Once set up, we’ll be able to press one button and the front mower will lift, followed by the rears when they reach the end of the run.

The final thing we would like is a proper break-back system, rather than just relying on the geometry of the mowers to ride over obstacles.

We’ve only done one season, but the performance has been good so far. If we can say the same in a few years’ time, we would consider having another set of Kverneland or Vicon triples.

There are some other good mowers out there, though, and the fact that our favourite rep recently left our local dealer means there is a chance we’d try another brand next time.

Krone equipment has really impressed us of late and we have one of its twin-rotor rakes. The triple mowers would be tempting too, if only the price was a bit more competitive