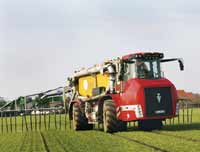 As NVZ legislation takes an ever tighter grip, accurate slurry application is becoming vital. Emily Padfield visited one of Europe’s foremost specialists in the field

It’s often the case that the most useful inventions emerge out of necessity and, in 1980, in response to growing concerns over slurry odour and environmental losses, German company Vogelsang developed the first dribble bar band-spreading system.

It’s an application method that’s becoming more common in the UK, too, and not just for grassland application. “Dribble bars are being increasingly used for applying high-value slurry to growing crops, too,” explains Vogelsang UK’s Sion Williams.

But to get it on the field in the first place there are quite a few processes slurry has to go through, adds Mr Williams.

First, it has to be turned into something that a pump can deal with, which is where the firm’s RotaCut macerator comes in. This uses a metal screen and rotating blade to draw material in and chop it up. If there are any heavy objects, these drop into the bottom of the housing where they can be removed.

Once it’s travelled through the macerator, slurry is ready to pass through the company’s HiFlo lobe pump. Instead of the more typical centrifugal pump, Vogelsang uses a complex design of rotor which allows material to flow into an expanding cavity on the inlet side before flowing through the pump chamber.

As the rubberised rotor lobes rotate and mesh together, fluid passes around the housing segments and is forced out as the cavity contracts once again, eliminating the need for any pulsation. Because of its design, the pump can also be run dry without damage.

When it comes to application, Vogelsang manufactures three types of distribution head. The Dosimat uses a rotor-and-blade system to chop fibrous material with a scissor action before the slurry or digestate is distributed to the hose outlets.

For thicker material the DosiCut uses a macerator as well as a rotor-and-screen system, so material gets a blockage-preventing double chop before travelling down the 55mm pipes.

For wider dribble bars and injectors of up to 30m, the ExaCut central distribution system is the answer. “The rotor is designed to operate in both directions,” says Mr Williams, “and as manure enters the side inlet, it travels through the chopping mechanism and is evenly distributed to each dribble hose.”

Because liquid is distributed to each hose at the same time by each of the three systems, operators can back right into corners and start spreading across the whole width, rather than having to worry about applying in a v-formation while material is fed through to each hose consecutively.

The band applicator itself, which is available in widths of 6m to 30m, has stiffened plastic hoses at 15cm intervals (which can be adjusted to suit the application). To prevent leakage on the roads the DropStop feature flips the whole bar vertically.

Alexander Marquardt (pictured) spreads 300-400,000cu m of pig and cow slurry as well as biogas digestate each year. He operates two Samson PG25 tankers, both fitted with Vogelsang 24m SwingMax dribble bars. Haulage tankers are fitted with a dolly and can be hooked-up to a high speed tractor for quick refilling in the field. These tankers refill the nurse tanks, which are fitted with a pump run by electric motor that kicks in when weight sensors indicate levels are getting low. To extract slurry or digestate from the storage tank at the farm or biogas station, a 6000-litre high-capacity pumping station is used. Before the slurry or digestate reaches the pump, stones and foreign material drop into a easy-to-empty settlement trap. Liquid then passes through the RotaCut macerator before reaching the pump. There are two 8in hoses which allow a 27cu m tanker to be loaded in just four minutes. 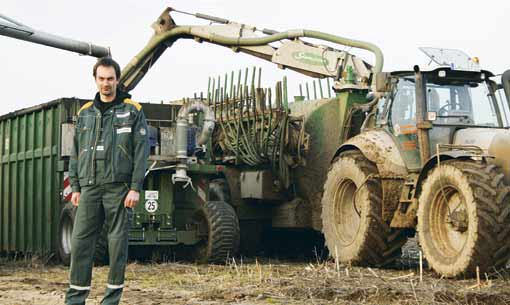 Heinrich Fischer runs a Holmer Terra Variant 600 and a TerraGator 2244, both which have specially-designed Vogelsang Compax 2 15m dribble bars attachments, as well as an Evers tined injector if spreading on to stubbles or cultivated land. He runs nine nurse tankers to fill both machines and also uses a Mercedes Unimog for high-speed work.