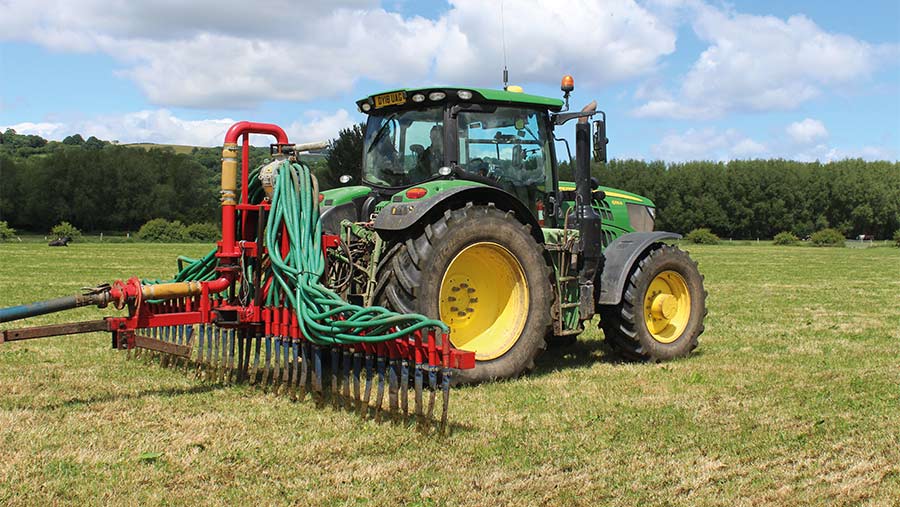 It wasn’t that long ago that slurry was considered a nuisance rather than a commodity, constantly threatening to overwhelm the lagoons and towers built to contain it.

But as on-farm storage has grown and improved in quality, farmers have been able to concentrate on making the most of its soil-nourishing properties.

Like many contracting outfits, Roger Page and his team, who are based near Churchstoke, Powys, have seen a steady increase in demand for accurate application methods and more particular timings.

Until 2017, a 6m Slurrykat trailing shoe was their primary tool for precise umbilical application, but after investing in an Opico Sward Slitter, a number of customers asked if they could combine aeration and spreading into a single operation.

Their first attempt involved mounting the slitter on the front linkage, with the trailing shoe at the rear.

However, with so many blades biting into the ground, the tractor’s autosteer had no chance of controlling it. “It almost pulled the front tyres off the rims,” says Roger.

A change of tack was required, and as they were keen to add a dribble bar to their repertoire, they looked for a unit that could mount to the slitter or be used separately.

The only machine they could find with the correct spacings to line up with the aerator blades was sold by Opico.

However, this was a permanent attachment, meaning it was impossible to use as a standalone dribble bar. Plus, it cost about £10,000.

The answer was to build a more suitable machine themselves.

Roger’s primary business is agricultural engineering and fabrication, so the biggest challenge was finding the time to put it together.

“In peak season, we’re usually busy working on other people’s machines, but we always like to have a winter project on the go and, in 2017, it was the dribble bar.”

The first task was to make it quick and easy to hook the bar on and off the slitter.

As a result, they opted for a simple three-point linkage arrangement, which was grafted to the back of the Sward Slitter frame, in line with its own attachment points. 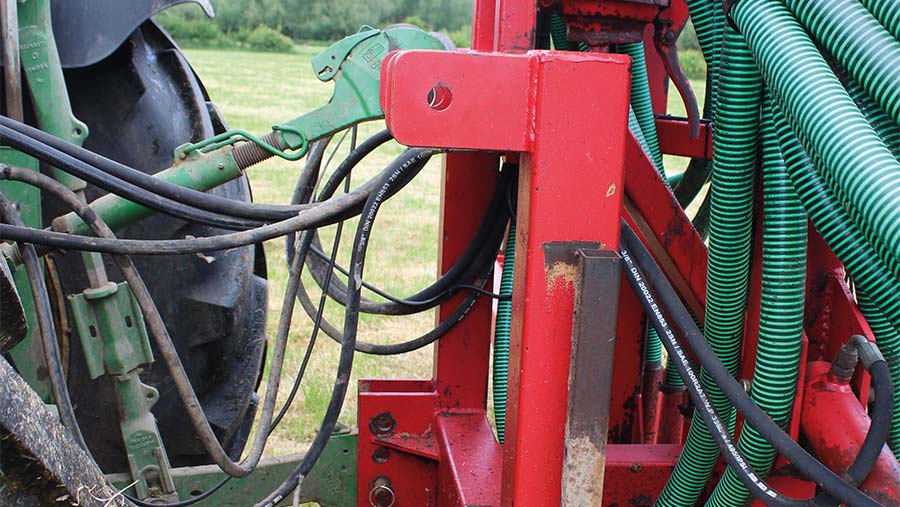 This allowed the dribble bar to be built as a standalone unit and, with four jacks incorporated into the frame, it has a stable platform to be lowered on to.

In order for the slitter and dribble bar wings to fold simultaneously, a distributor valve was spliced into the original Opico pipework. 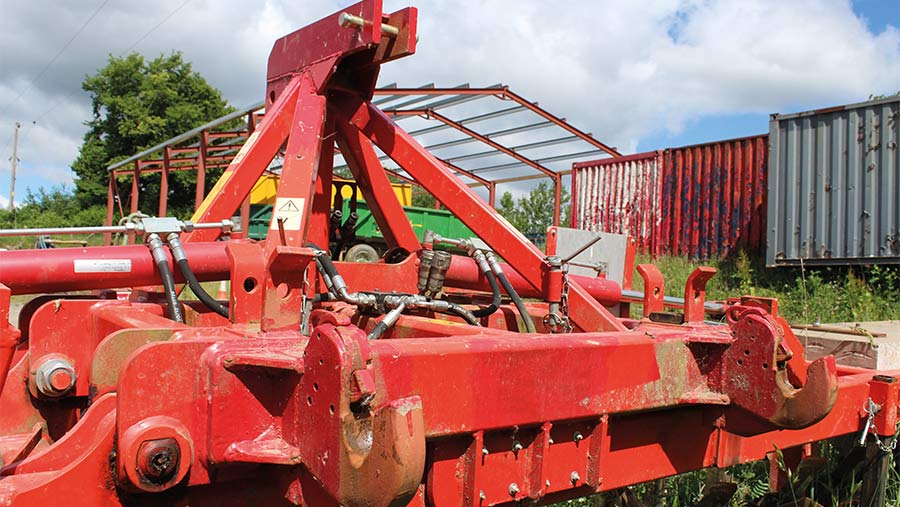 The applicator’s hydraulic lines connect into this via a pair of quick-release couplings so that they share the same oil flow.

As for the macerator, they opted for a 40-point Vogelsang Exacut, which is largely the same as the unit fitted on their Slurrykat trailing shoe. 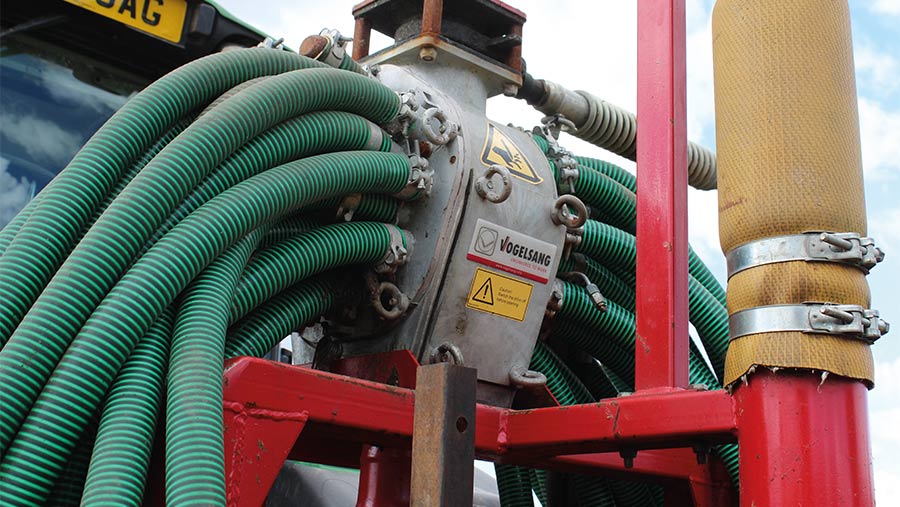 It was picked partly because it’s been a reliable performer, but also for the simplicity of stocking just one brand of spare parts.

That said, with rebuild kits only available from Vogelsang direct and costing £800, it’s a bit pricey to keep running.

“We used to be able to get the bits cheaper from Kramp or Granit, but unfortunately Vogelsang has put a stop to that,” says Roger.

“As a result, we’re a bit more focused on making them last – with a bit of TLC, we can go 12 months between rebuilds.”

To improve manoeuvrability at the headlands and speed up the process of gathering up pipe, some thought has been put into the design of the telescopic swing arm. 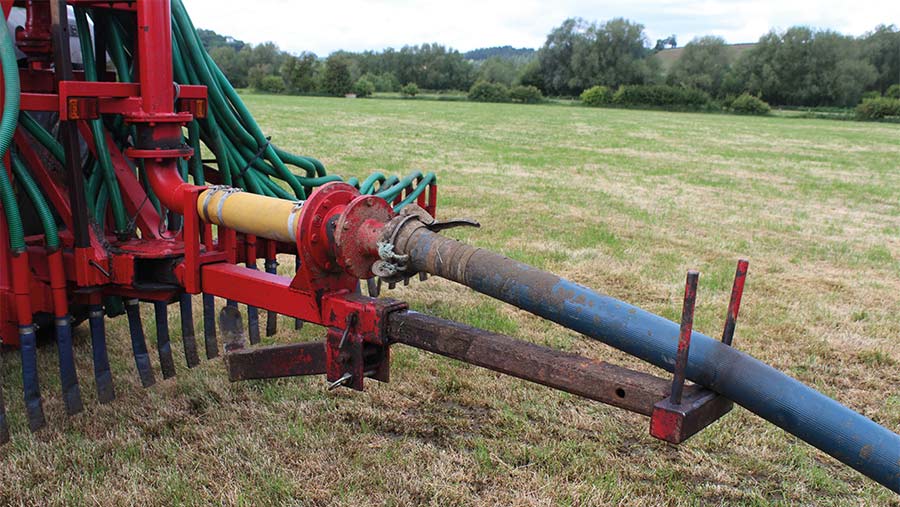 This includes giving it a 180deg pivot that allows the arm to swivel parallel to the dribble bar if needed, adding a long extension for swinging the pipe out wide and fitting a fold-down foot for collecting the hose at the end of the job.

All new metal was used for the build and, to make sure it stands the test of time, most of the frame was fashioned out of 100mm box section.

The main season for running the slitter and dribble bar combination is in the spring and straight after first-cut, when the ground is soft enough for it to dig in.

However, by adding 150kg concrete weights to each of the slitter’s wings, the operating window can be extended a bit. 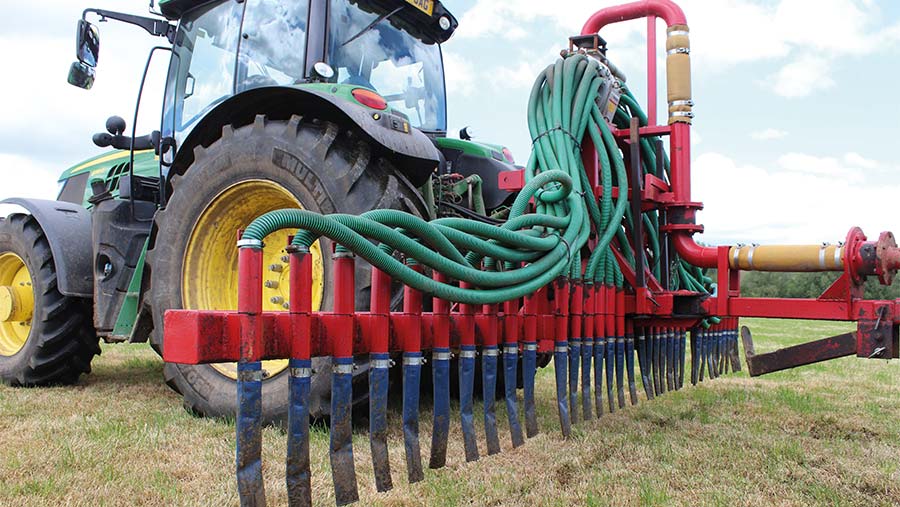 In summer months, the umbilical workload is shared between the solo dribble bar setup and the trailing shoe.

The dribble bar is used primarily on shorter grass and the trailing shoe comes into its own for longer swards, as there’s less contamination and a shorter lag before grazing can recommence.

Just 20% of the workload is now carried out with the splash plate and there’s a big question mark over how long this will be able to continue.

The dribble bar is also the most popular choice in the winter as it doesn’t churn the ground up.

Pumping duties are handled by a pair of Doda HD35s, with one capable of serving 1,700m of hose and two up to 3,500m – providing they’re not having to push uphill. Extra hoses are hired in when the team needs to do the longer runs.

Their own hoses are predominately Snap-Tite, which are apparently more durable than the Oraflex they were running before.

“They didn’t hold up well when being dragged, so we’re gradually phasing them out.”

They are currently transported on a 1,600m AW trailed reeler and a 1,400m mounted Slurrykat reeler, but Roger is putting the finishing touches to his own larger trailed version that has an extra spool, upping capacity to about 1,900m.

“We always seem to be a hose or two short, so hopefully this will give us plenty to play with.”

When they need to span roads and tracks, a set of homemade ramps come into play.

The design has been perfected over three iterations, and now has a central open section that the pipe can be slotted into.

These are formed out of a section of channel, with flat steel pipe-protecting shoulders welded on the top and tabs on the side for the ramps to attach to.

They are barely any higher than the pipe, so low-slung cars can drive over them without catching.

They are also handy to transport as they slot neatly into a box that can be carried on the tractor’s front linkage.

A recent addition to the slurry enterprise is a Storth tower stirrer that mounts to a 7m-reach Manitou 731 telehandler.

These mixers typically run off the handler’s hydraulics, but they’ve fitted longer pipes so it can be powered by a tractor.

This significantly speeds up the stirring process, and a 300,000gal store with 1m crust can be blended to a decent consistency in three to five hours.

Other recent workshop projects include a silage compactor that was built from scratch.

The starting point was a section of steel tube but, having recoiled at the quote from his regular stockholder, Roger found a firm that could roll one from sheet metal for a fraction of the price. 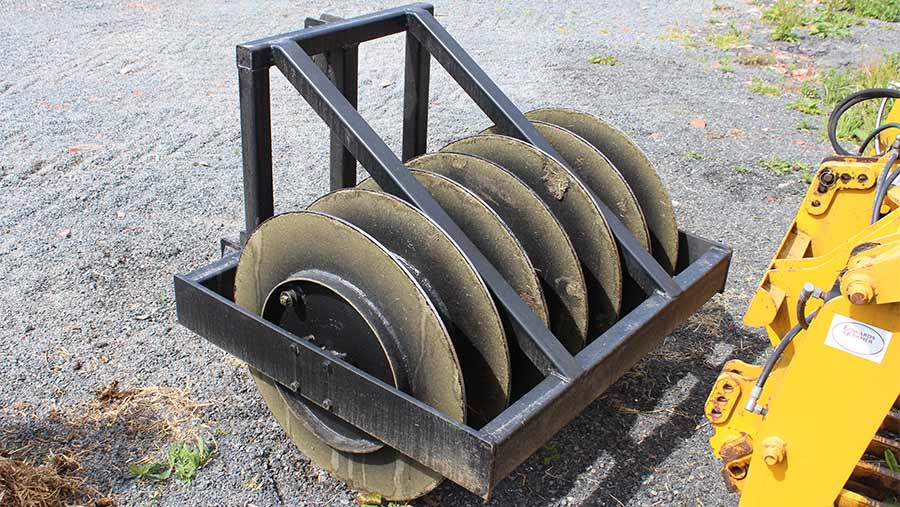 Price Fallows, based in Shrewsbury, Shropshire, formed the tube for just £170 and also cut the rings for the outside out of 12mm plate.

The component parts were then welded together in the workshop and the tube was filled with concrete.

It weighs about 1.75t and, according to Roger, it has made a marked improvement to silage quality.

One of the biggest benefits is that it quickly levels the silage, leaving more time for rolling.

At 1.5m wide, it sits neatly inside the rear wheels of their John Deere 6175R, which means the operator can steer away from the pit walls without any risk of snagging the side sheet. Total build cost was £1,500.

Narrower rakes suitable for balers and forage wagons tend to have fewer tine arms than their larger siblings, which limits the speed at which they can travel.

So when it came to sourcing a narrower rake, Mr Page and his team decided to buy a larger model and cut the tine arms down.

Another boon to raking output was switching to GPS autosteer, which they first tried in 2016.

“I used to think we could drive pretty accurately by eye, but it’s increased output by about 20%,” says Roger.

Roger Page has been running an agricultural engineering and contracting business from his base near Churchstoke, Powys, for the past 29 years.

Contracting services include umbilical slurry spreading, silaging with a John Deere 7350 and combining with a brace of Claas Lexions – a 550 and 570TT – that he runs in partnership with local hay and straw merchant Ray Bloor.

He also offers a hedgecutting service and hires out machinery. 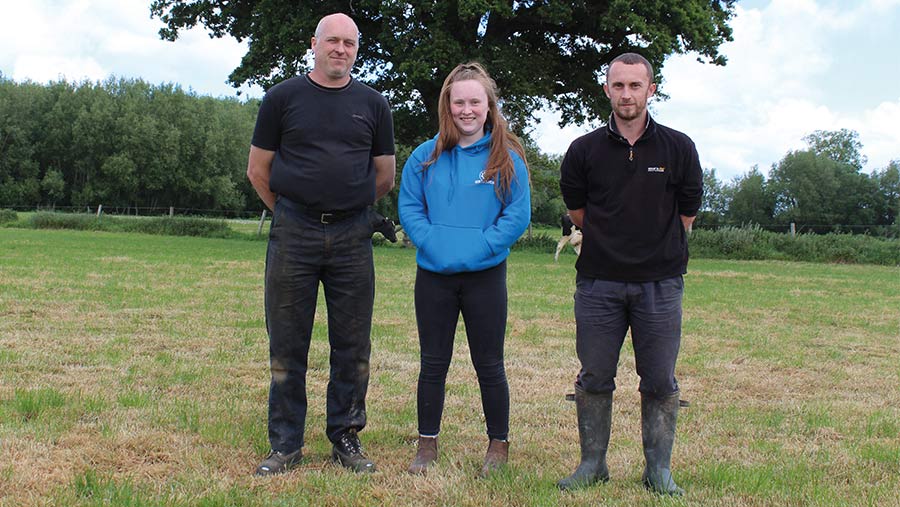 He has three full-time employees, an “army” of part-time operators at busy times, and has the help of his wife, Jackie, and daughters, Emma and Serah.

Roger spends most of his time in the workshop fabricating custom machinery, gates, trailers and other metalwork projects, as well as carrying out machinery maintenance and repairs.