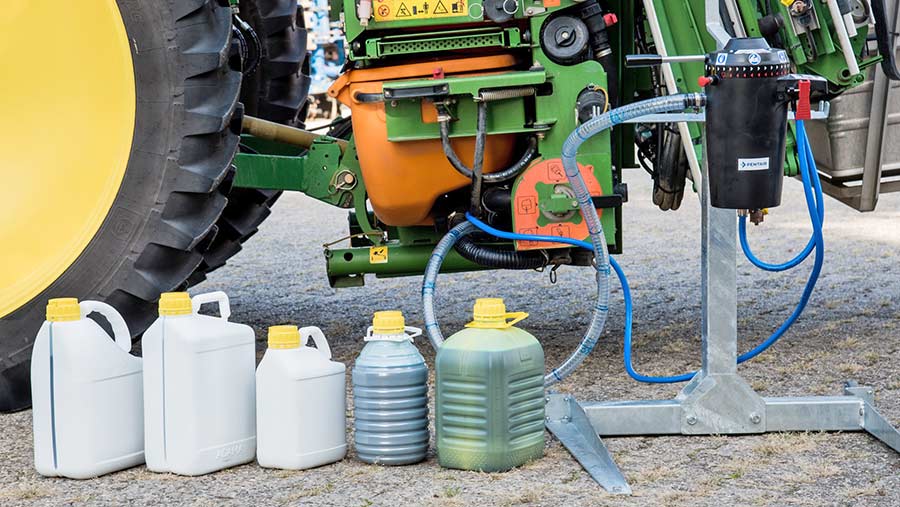 A closed-transfer system for safely mixing and loading pesticides into sprayers has been successfully piloted on several UK farms, offering benefits to operators and the environment.

The system transfers neat pesticide from containers into the sprayer without the chemical being exposed to the air. This is in contrast to the current approach of pouring chemical into an induction hopper.

David Pike is one of several farmers who trialled the system last spring, at Bradenham Hall farm in Norfolk, where he manages 550ha of arable cropping.

“I like trying new things and saw it as an opportunity to have an input in the development of new technology.”

He highlights that the primary benefit with the system is the reduced risk of sprayer operator exposure.

His agronomist, Andrew Melton of Frontier Agriculture, also sees an environmental benefit of the reduced risk of any accidental splashes and spills.

However, the uptake of closed transfer technology has been limited by the lack of a standard system. This may soon change, with five key agchem companies working together to introduce the easyconnect system.

At the heart is a standardised prefitted cap (IS industry standard) and the group (see panel) plans to launch a cap, which will be ready fitted to a range of their products in 2021/22.

Currently, there are a whole host of container shapes and types, some with foil and some are difficult to completely empty out, says Mr Pike.

For the trial, the caps and foils had to be removed and replaced with the special design cap.

Sprayer operators simply turn the container upside down, place it on the coupler and then move a lever, which depresses the central part of the lid and rapidly empties the contents.

For example, it will empty a five-litre container in just three seconds and then rinses the can.

For Mr Pike, one key requirement is that it doesn’t slow down the filling process for his Houseman 3,000-litre sprayer with 30m boom.

The system he trialled had only one coupling, but he believes sprayers will need to be fitted with a bank of four to six connectors to cope with the more complex tank mixes.

“Sometimes you can have 25 cans or more for the more complex mixes. For example, a T1 mix could see multiple cans of six products [three different fungicides, a herbicide, a growth regulator and manganese].

“The challenge is then being able to rinse them all with clean water before you fill the sprayer tank,” says Mr Pike.

He also believes the system needs refining for when using part cans. “Cans will need to have clear graduation to enable measuring or perhaps have a digital flow meter fitted.”

Both Mr Melton and Mr Pike believe the pilot has been successful.

“We could now see rapid progress in the adoption of closed transfer technology,” he adds.

Both believe the system could eventually replace induction hoppers on sprayers.

Could the easyconnect system become the new industry standard?

While closed transfer systems offer several advantages, their introduction has been limited due the failure of agchem and sprayer manufacturers to adopt a standardised system.

But this may soon change with five key players joining forces to test and introduce one of the systems.

It was developed by BASF in collaboration with equipment manufacturers and has been tested on-farm in selected countries since 2015.

The group’s aim is that by 2021/2022, a broad range of containers will be equipped with the standardised pre-mounted screw cap and offered to farmers in Denmark, Germany, France, the Netherlands and the UK.

Watch the video demo of the easyconnect system.