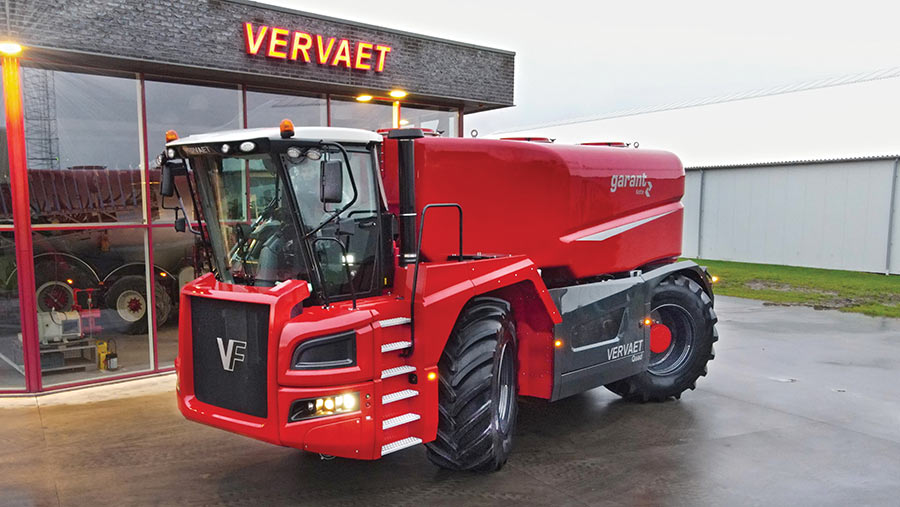 After years staying true to the trike concept for its self-propelled spreaders, Vervaet has decided to break from tradition and built its own four-wheeler.

The 21cu m Quad slurry tanker packs a colossal 550hp and, the company hopes, will offer stronger competition to the likes of Vredo, Holmer and the Claas Xerion.

All have enjoyed success in the UK with self-propelled, four-wheel setups that are able to run on dedicated crop tramlines – unlike trikes.

The development process of the Quad involved German slurry kit maker Garant Kotte, and the two firms will continue to work together on manufacturing and sales in the future.

At its heart is a 13-litre, six-cylinder 550hp Volva Penta engine that offers a massive 2,650Nm of torque at just 1,200rpm, which should help to reduce working revs and lower fuel consumption.

The transmission is a hydro-mechanical affair built in-house, with Vervaet deeming it an attractive balance between conventional powershifters and slicker CVTs.

It allows the Quad to offer more torque between 5kph and 15kph than any other self-propelled machine on the market, the company claims.

As with the three- and five-wheeled spreaders, the axles are made by Omsi and the two mechanical units are each driven by a pair of hydraulic motors.

At slow speeds, both motors work to manage the torque, while on less power-sapping transport duties, all the oil is directed through a single unit. 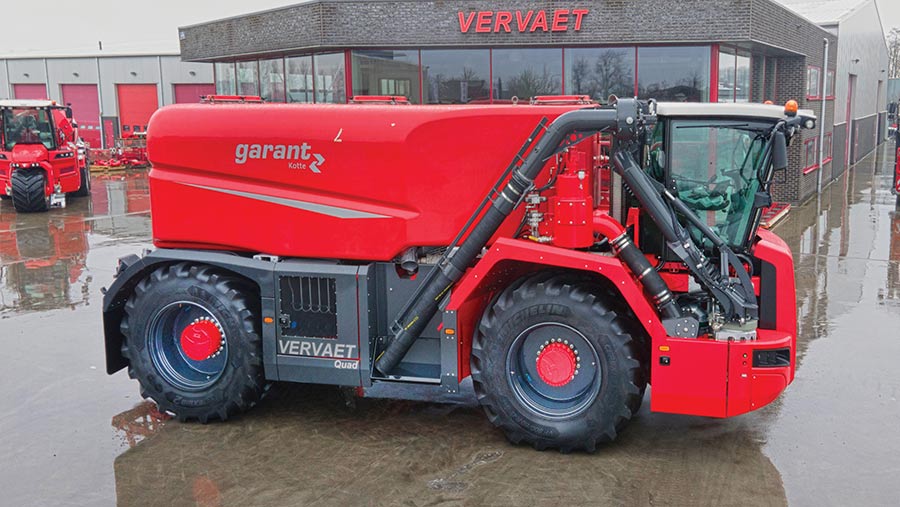 Both axles have diff-locks and top speed is 40kph.

Crab steering keeps each wheel in its own track in the field and Vervaet offers up to five different tyre options depending on the customer’s preference, with the R42 units providing 70cm of ground clearance.

The Quad will be offered with various pump options to fill the 21cu m tank.

A Vogelsang or Borger 9,000 litre/min pump paired with an 8in hose is the smallest combination on offer, while the larger Superload system comes with a 10in inlet hose and either a 12,000 litre/min or 13,500 litre/min Borger pump.

The slurry can then be chopped by a Vervaet cyclone macerator or a Vogelsang equivalent.

A 180deg loading arm is mounted beside the cab and tucks neatly away alongside the engine.

The company also intends to offer a muckspreader body, but this won’t be an option until 2022.

The rear linkage has an 8,000kg lift capacity, so should also be able to lift most mounted cultivators and drills.

The firm has opted to stick with a suspended Claas-sourced cab, which is combined with hydraulic front-axle suspension.

Users will have access to a new Vervaet online platform, cannily called My Vervaet, later this year.

It has been built in conjunction with AVR and will allow owners to monitor machine performance and hours, GPS data, and should connect to most farm admin packages.

Vervaet says it will be happy to sell anywhere between one and five units a year in what is a small and congested market.