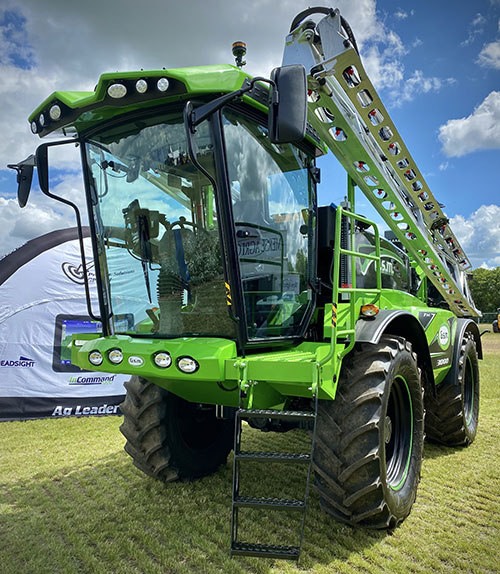 There was a new face in the Sprays and Sprayers Arena, with Italian firm Grim making its UK debut after penning a distribution agreement with Scottish Borders dealer Merse Agriculture.

Merse already has a tie-up with Bargam but, with spare parts proving tricky to source and the popular 3,000-litre model discontinued, it decided to add another option to its roster.

Ironically, the two companies’ manufacturing facilities are separated by just 500m on the eastern Italian coast – so they, along with John Deere-owned Mazzotti, are keen competitors in their home market.

On show at Cereals was the modestly sized 7-series GSM 3000, decked out in Grim’s striking apple-green livery.

It is powered by FPT’s 170hp, 4.5-litre four-cylinder engine that, unusually, is mounted at the rear of the machine. This apparently improves weight distribution compared with a mid-engined model, particularly with a full tank, when the rear wheels might otherwise be prone to sinking in soft soil.

The transmission is a 50kph-rated Danfoss hydrostatic unit paired with mechanical differentials. For extra comfort, there is also the option of self-levelling air suspension, which automatically inflates and deflates to keep the machine level.

The nozzles are fed by a 300-litre/min Conet diaphragm pump, with the model on show sporting a 24m Pommier aluminium boom and manually changed triple-cap clusters.

However, the spec can be upgraded to auto nozzle switching, plus 13-section shut-off or individual nozzle control and twin- or triple-sensor boom levelling.

Prices are expected to start at roughly £170,000, though Merse and Grim are still ironing out the final details. Grim also plans to make its larger 9-series model available in the UK.