Moisture Planting Technologies (MPT), based in New South Wales, has designed the kit primarily to help Aussie farmers avoid unnecessary wear and tear on machines by reducing sowing depth in areas where moisture is present.

According to the firm’s David Finlay, many growers are direct drilling chickpea crops down to 25cm to be sure of finding moist soil, and this safety-first seeding depth is burning barrel-loads of diesel in the process.

“Spot consumption rates can hit 80 litres/ha and the incredible force required to pull 25t, 24m planters has meant we have had to fit many with steel reinforcements to cope with the strain.” 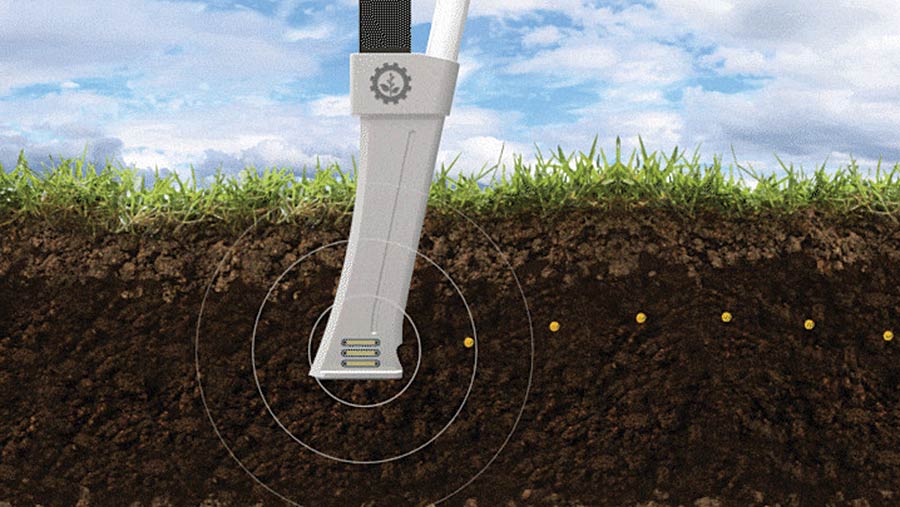 The company decided to look at creative ways to reduce the drag force associated with drilling and noticed that the main problem was farmers laying seed deeper than necessary to mitigate varying soil conditions – primarily moisture.

However, by tracking soil water in real time, it can now alter sowing depth accordingly.

The system is designed to fit most new broadacre drills and, he says, offers potential yield increases of up to 10% in the right soil and rainfall conditions.

MPT began by creating a tine-based row unit made up of a three-stage parallelogram system. All three sections – gauge wheel, tine and press – have their own hydraulic cylinder.

Unusually, all adjustments are computer controlled – there are no hole-and-pin arrangements to set the position of particular components – so each row carries a leading depth wheel to give a precise measurement of ground position.

The second linkage manages the tine depth, which is the standard soil working component.

“Tines bite into the ground much easier than a disc and, for farmers drilling deeper than 5in, it’s the only option,” says Mr Finlay.

However, it is possible to swap out the tine and fit a double-disc opener for planting oilseed rape at shallow depths, or a cultivator point, should growers simply want to loosen the ground.

At the back is a press wheel, which allows operators to vary downward pressure separately of the depth wheel. The upshot of this is packing pressure can easily be adjusted when ground conditions change.

The obvious rival to MPT’s system is the Smart Firmer, developed by Agco-owned firm Precision Planting.

It runs behind the drill’s discs to measure soil temperature, moisture and residue in the seed furrow, and can be fitted to any row crop planter that drills deeper than 2cm. 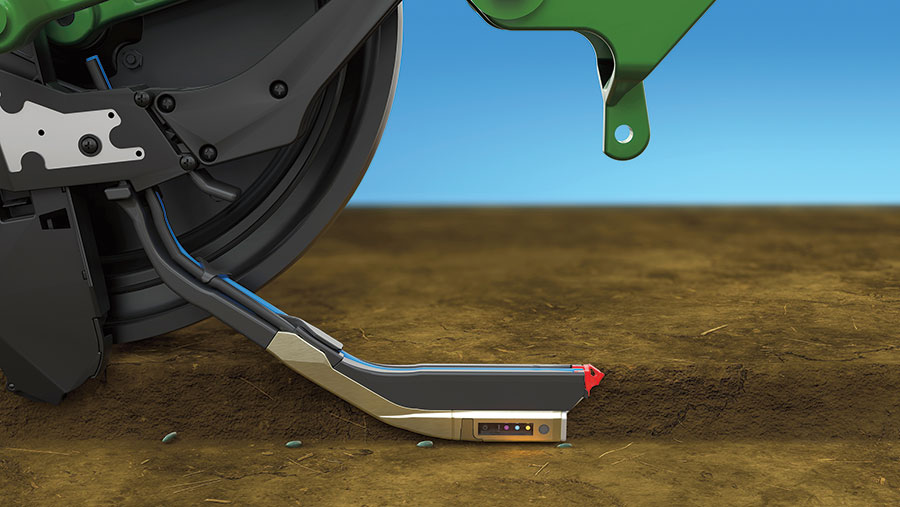 As it presses seed into the seed trench, a sensor gives real-time measurement of soil moisture, temperature and trash levels around the seed.

It can also sense organic matter levels and cation exchange capacity (CEC), which are both valuable indicators of soil productivity.

Organic matter and CEC are both characteristics that require sampling or an extra pass with a specialist machine to measure, with results used to retrospectively create maps for variable-rate seeding.

With Smart Firmers fitted on each seeding row, all soil-condition data is fed back to Precision Planting’s 20|20 monitor in the tractor cab.

The information is then used to vary the seed rate, fertiliser rate, crop variety and seeding depth to even up emergence or push yields in more productive areas. Conversely, seed and fertiliser can be cut back in less-productive areas.

Its unique feature is the ability to vary seed and solid or liquid fertiliser automatically in real time when used in conjunction with the firm’s various individual row electronic metering systems.

The clever part of the system involves a series of sensors that are embedded in the tine opener to monitor soil properties through the profile.

These sensors are mounted behind a ceramic plate on the side of the tine and the measuring happens during the physical process of opening the soil to provide real-time data relating to its condition.

This differs from the likes of Geoprospectors’ Topsoil Mapper, which fits to the tractor’s front linkage and takes measurements without actually touching the soil.

Sensors are fitted evenly along MPT’s toolbar, but not on every tine, with a 12m machine carrying six sets in total. Initially, the company sourced them from third parties, but it has now decided to build its own to more accurately target specific soil properties.

Unsurprisingly, this is a complicated business. The end result is that several types of sensor have been developed, all of which give different data readings, but they are selected to suit a farm’s particular soil conditions and requirements.

The sensors send data to a microprocessor mounted on the toolbar, which analyses the information and automatically makes adjustments to find the optimal drilling depth.

Information is then sent via a local wifi connection to a tablet in the cab. This is effectively an interface running through an app – all the info crunching happens on the drill – and means the driver can track what is happening with sowing depth and soil moisture.

And because it is self-sensing and self-adjusting, it doesn’t require mobile data to operate.

How does it work in practice?

In terms of driving, the operator simply sets a minimum and maximum sowing depth and the computer will lift and lower the tine to suit the conditions.

If the drill is working at maximum seed depth and detects no moisture, it will send an alert to the driver, who can then decide whether to continue, stop or reduce the depth – there is no value drilling deep if it’s just as dry as shallow sowing.

The tablet also gives operators manual control of all the functions, including depth, and a drilling map can be downloaded afterwards to overlay with yield maps.

There are currently no built-in functions to control the seed rate, but this prospect is being evaluated and could be added through a future software upgrade. However, operators can control things manually by monitoring the soil moisture/sowing depth on the screen.

In theory, variable-depth drilling influences the uniformity of crops when they emerge, as deeper-sown seeds take longer to reach the surface.

However, Mr Finlay says that laying the seeds in a uniform moisture density is the key factor, as they all germinate at the same time and variation is much less significant.

The Topsoil Mapper built by Austrian firm Geoprospectors uses a series of electrical conductivity sensors that fire signals into the soil profile.

The device is carried on the tractor’s front linkage and continuously measures soil moisture, texture and the depth to compacted layers throughout the topsoil profile using electromagnetic induction via an array of transmitters and receiving coils. 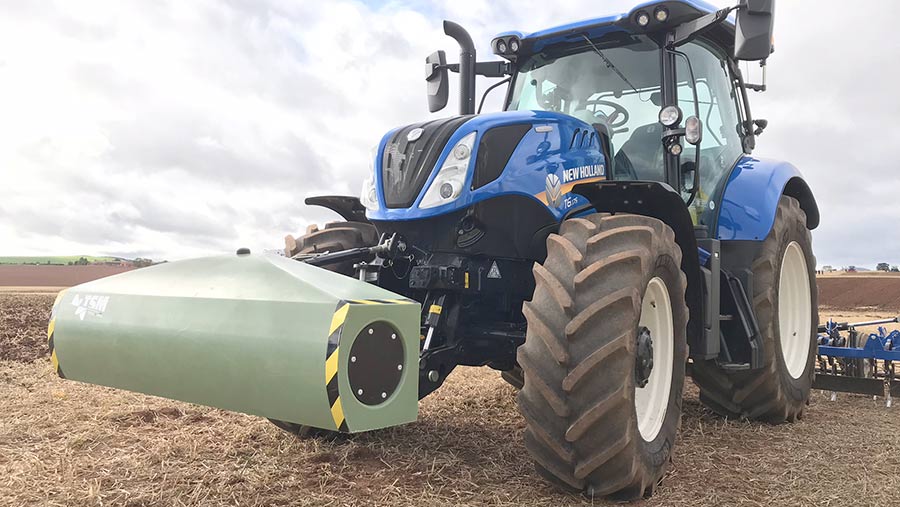 Depending on the type of signal that bounces back, the sensor’s brain can work out the exact depth of the compaction. This means you can carry out variable-depth cultivations without having to do any prior soil zone mapping.

The system is currently imported to the UK by CNH under its Agxtend banner.

Can it measure anything else?

The equipment has been developed primarily to measure moisture, but other sensors can be used to look at different soil properties.

Though most will have little effect on the rate or depth of drilling, they can help provide maps or data for future reference. These include pH, which could be used for variable-rate fertiliser spreading, for instance, and soil temperature.

The holy grail, says Mr Finlay, is soil carbon, but we’re a little way from that right now.

What about variable-depth cultivating?

The same combination of sensors and artificial intelligence can also be applied to European systems and could offer growers the opportunity to run a variable-depth tillage system.

Such setups are yet to gain much traction in the UK, though there was a surge of interest three years ago with Geoprospectors’ Topsoil Mapper, used in conjunction with Plowman’s Omni-Lift subsoiler and the Titan cultivator, sold by the now defunct Cultivating Solutions.

MPT has a machine set up with tillage points and is toying with the idea of offering auto-depth cultivations.

Is it available now?

The firm currently has a three-row machine working and is in the process of building a 6m toolbar that should be finished by spring. There are already lots of research bodies and farmers keen to conduct trials.

“The long-term aim is to build compete drills, but initially we’ll adapt other manufacturers’ toolbars to carry our coulter assemblies.”

The company expects to be ready to take orders by the summer, but is planning an alternative route to market. Rather than selling them outright, it intends to start off by leasing the drills to farmers in a pay-per-hectare arrangement.

This way, it can be sure that the system is working well without farmers having to commit to hundreds of thousands of pounds and foot any unforeseen bills that may arise early on.

MPT – where did it start?

Owner David Finlay has been developing farm machinery for 20 years through his engineering, product development and design consultancy.

Having spent much of that time working on broadacre spreaders, seed drills, front-end loaders and various bits of mining kit, he found himself inundated with requests to beef up drills unable to cope with the strains of deep sowing and high horsepower.

As a result of continuing dry weather, Aussie farmers have been drilling deeper than ever to find moisture. They’ve also been experimenting with alternative crops – such as chickpeas – that offer soil benefits such as nitrogen fixation and have a long enough coleoptile to emerge from depths of well over 12cm.

However, dragging 24m toolbars at that sort of depth has caused farmers all sorts of mechanical problems and results in unsustainable fuel use, so Mr Finlay decided to develop something that could adapt sowing depth where particularly deep work wasn’t necessary.