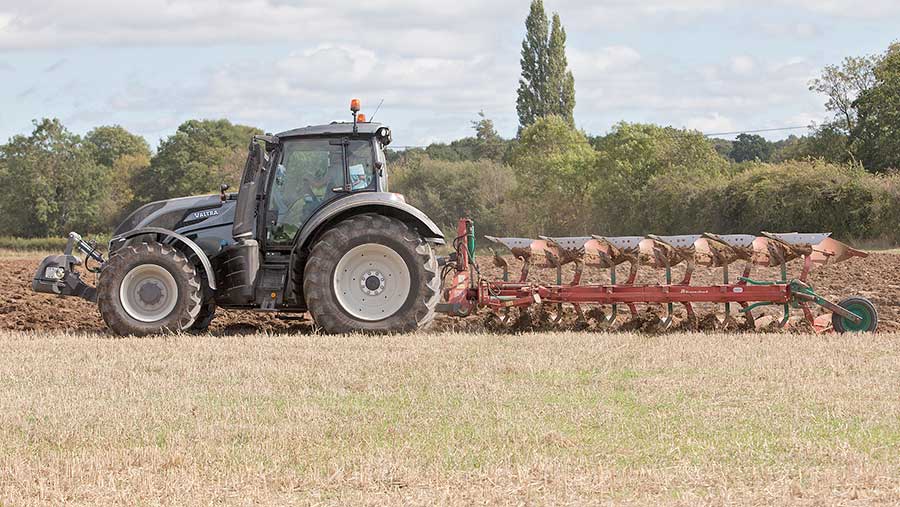 Valtra has made huge progress with its T-series tractors over the past couple of years, so it was no surprise that it ranked so highly in our test.

Its cab is comfortable and well organised, and the touchscreen monitor is as easy to navigate as anything on the market.

However, the Versu gearbox is one part of the tractor that has remained largely unchanged and could probably do with some refining.

In particular, range changes are slow and the brake-to-neutral function can instigate unsettling freewheeling when the pedal is gently depressed.

The list price may look on the high side, but it was loaded with more than £40,000 of extras.

The arrival of Valtra’s latest SmartTouch armrest package has all but dispelled the Finnish firm’s reputation for building dated cabs with unfathomable controls; the current offering genuinely challenges the likes of John Deere and Fendt.

The best bit is the 9in touchscreen, which was launched almost three years ago. It is identical to the Massey’s in size – it actually uses the same hardware – but the intuitive way it works is a far cry from the fiddly French offering.

Functions are displayed on the silhouette of a tractor, with coloured logos denoting transmission, engine, hydraulics and so on.

Swiping the screen swivels the tractor around to access linkage settings and other details relating to the back end. 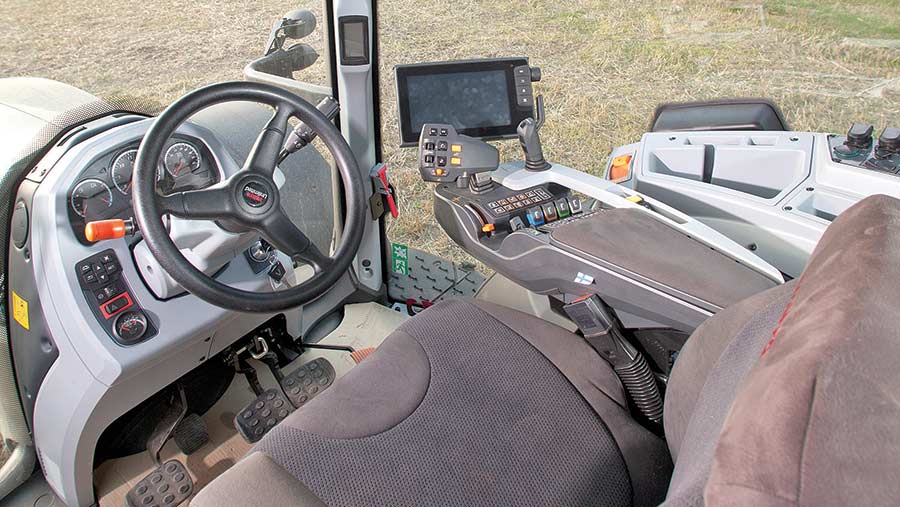 Selecting one of these accesses more detailed controls, and Valtra says most of the settings can be reached with just two touches of the screen (once you know where to look).

The run screen is made up of four assignable quarters that can be set to display pretty much anything, including the GPS. Isobus implements link to the screen instantly, too.

The armrest houses physical controls for engine rpm and the linkage, alongside four chunky spools. The linkage position is particularly easy to control through a sliding dial with a memory position tab.

However, uninitiated operators will need to be told about an unlock button that prevents use of the hydraulics, linkage and GPS steering valve after start-up. 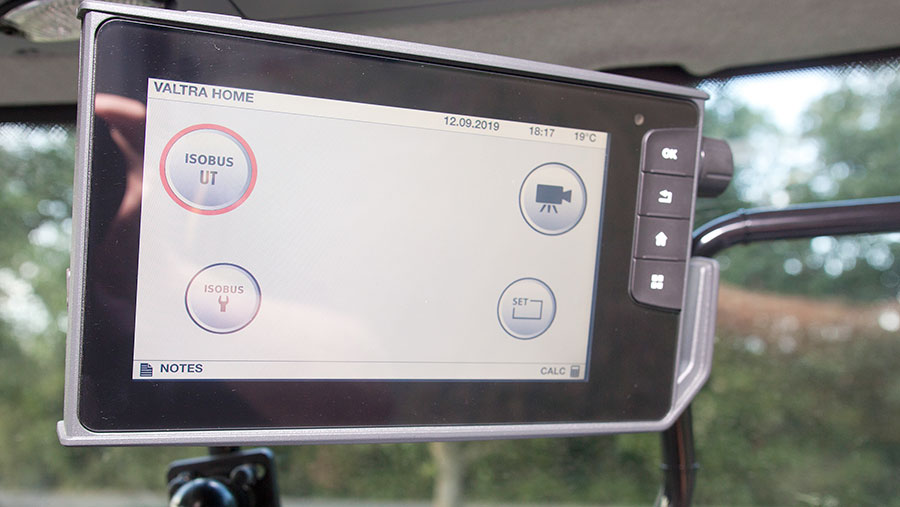 The joystick is a palm-of-the-hand arrangement (not dissimilar to Claas machines) and carries buttons that can be assigned to specific tasks in the screen. A recent upgrade has seen Valtra include Isobus into these options, too.

A minor gripe for those who like to swing the seat around to the right to the get a better view of the implement is that the armrest fouls on the side console, limiting movement. That said, it pivots a full 180deg in the other direction.

Access is great, with three big, low-gradient steps into the cab and a pedal-activated steering column.

All of the firm’s tractors share the forestry-ready, flat-floored cab, which is impressively deep – particularly compared with the New Holland – and offers stacks of room for stashing tools and food behind the seat.

The passenger’s perch also tucks neatly out of the way.

The T174 scores pretty highly in the comfort stakes; there’s a wide Grammar Evolution hotseat and air front-axle suspension which, combined with the air suspension, provides a noticeably smooth ride.

The 7.4-litre, six-cylinder engine is big by sub-200hp standards and was the largest of our test group by some margin.

It is built by Agco’s engine division – once Sisu – and is rated to 175hp, but can make use of a boost for transport and pto work that winds it up to 190hp.

The T174 is the smallest T-series model available with this engine – less-powerful versions carry the same block as is employed by the Massey 7718S.

Interestingly, it is the only T-series tractor available with Valtra’s Eco mode, which remaps the torque curve to improve fuel economy and reduce engine loading for jobs that don’t require loads of power.

Average crankshaft speed is apparently reduced by 20% to save engine wear, with idle speed dialled down to just 650rpm.

Maximum torque is available at 1,500rpm, but the plucky Finn seemed to hold on well as the revs dropped – the obvious perk of running a bigger-bored engine.

In practice, it meant downshifts were less frequent when hitting tough patches with the plough, though it’s possible to set specific shift points in the screen.

As for emissions, Valtra has opted for the tried-and-tested route of AdBlue, selective catalytic reduction and a particulate filter.

The other detail worth noting is turning circle. Despite carrying a big engine, the wasp-like design of the bonnet and long wheelbase has allowed the designers to keep the turning circle to an impressive 10.5m.

Valtra’s Versu powershift gearbox offers five speeds in four ranges. Like most posh powershifts, it’s so efficient at shifting within a range that it feels pretty close to a CVT. 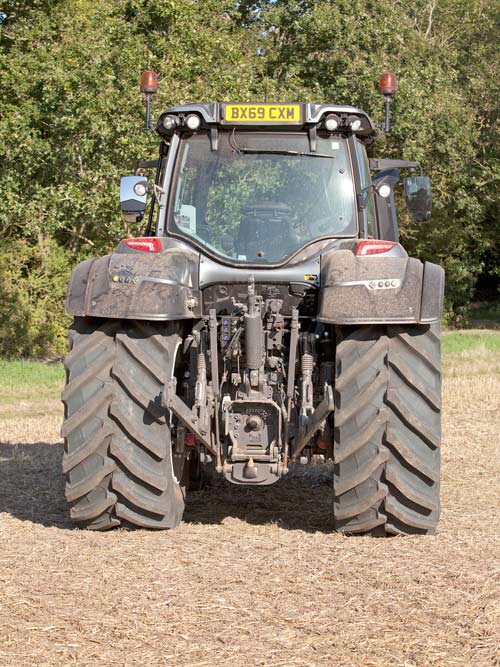 The tractor will always start in automatic mode, but can be switched to manual using buttons on the joystick. It will negotiate ranges B, C and D automatically, but engaging A-range requires the operator to manually press the minus button on the stick.

One obvious positive is the ability to set a target speed using one of the pre-set cruise buttons and let the tractor adjust engine revs and powershifts on the job.

The biggest issue with the gearbox is the painful delay as the new gear is engaged. However, we’ve been told this lag has been reduced since our test by way of a recent transmission software update.

When flitting between two ranges, the most sensible thing to do is to put a limiter on the final gear in the lower range. This avoids lengthy changes, especially during field work, where forward momentum is otherwise immediately lost.

Changes in speed can be controlled either on the foot pedal or via the joystick, just like a Fendt. However, we found the joystick a little ungainly for the job.

Knocking it to the right activates cruise control, with a clever and neat thumb scroll wheel on the bottom to adjust speed incrementally.

The tractors also have a brake-to-neutral function, which most manufacturers now offer to save declutching all the time.

However, it has a habit of letting the tractor freewheel when gently dabbing the brakes, so there are different profiles that can be set to turn this off when doing road work.

A better solution, we think, would be for the tractor to gradually disengage the drive as the brake pressure increases.

On the plus side, the Versu system memorises the brake-to-neutral setting, whereas it has to be reapplied on the MF every time the tractor is switched on.

The Versu box also has a hill-hold feature, so you can get a smooth start, even uphill, without having to keep a foot on the brake.

Maximum rear lift is a more-than-adequate 9,500kg, so it coped with the six-furrow plough with ease. The optional hydraulic top link may seem like a luxury, but once you’ve had, one it is difficult to imagine life without it.

At the rear, spools are blue and green for positive and negative on the left of the top link, but this doesn’t correlate to the colours in the cab.

This means it can be confusing getting the correct holes and spools lined up – it would make things much easier if the colours matched. 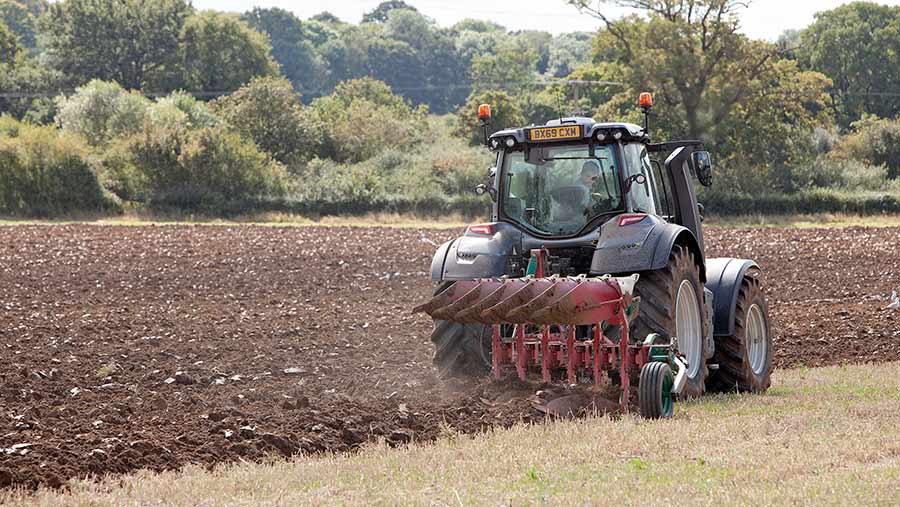 The spool valves and memory buttons on the joystick are easily assignable. However, one niggle we had was engaging the area meter.

If you set the linkage drop to start recording work in the memory sequence from the three assignable M-badged buttons, the field meters don’t engage, as the linkage rocker control has to be in neutral.

This means the signal is never sent to the recorder, though we’re told this has now been rectified by a software update.

There is an option to spec up to four rear spools with Power Beyond, plus two low-flow valves for the push-out hitch and top link.

Valtra’s T series is the third most powerful of the four ranges it has in its portfolio. It includes seven models and starts at 170hp with the T144, rising to 271hp with the largest T254.

Sitting fourth from the top, T174EV is the smallest model to use the 7.4-litre Agco Power engine – something it shares with all four larger tractors. The smaller T144 and T154 models use the same 6.6-litre block as the Massey Ferguson 7718S.

As for specs, there are four to choose from. The Hitech, Active and Versu versions all use the same five-powershift, four-range transmission, though fancier Versu mdoels also get the SmartTouch screen and armrest, along with brake-to-neutral functions so it can be driven like a CVT.

Top dog is the Direct, which is Valtra’s single-range CVT.