Massey Ferguson’s six-cylinder tractor line-up is now a little long in the tooth. On the one hand, that means the Agco Power engine and Dyna 6 transmission are both solid and time-proven.

But the flipside is that the firm has had little scope for improving the convoluted method of setting the gearbox up properly.

The cab is also crying out for a refresh, and although there is a new Datatronic screen, it’s not as slick as it could be.

However, the 7718S is packed with features, has a good power-to-weight ratio and comes in considerably cheaper than its rivals – it’s a lot of tractor for the money.

Massey’s six-pillar cab frame has seen remarkably little change since it appeared on the 6100-series tractors back in the late 1990s.

The launch of the 7600-range in 2011 introduced a few modifications – including increasing interior space by 25% – but the format remained the same.

Old school as it is, this cab does have merits – the large corner windows at the back of the cab give decent views of rear-mounted implements and these can be opened for a welcome introduction of fresh air.

It also means the doors are small and easy to swing open.

But the chunky B-pillars do restrict views to the side and a number of our testers found it difficult to find a comfortable seating position. 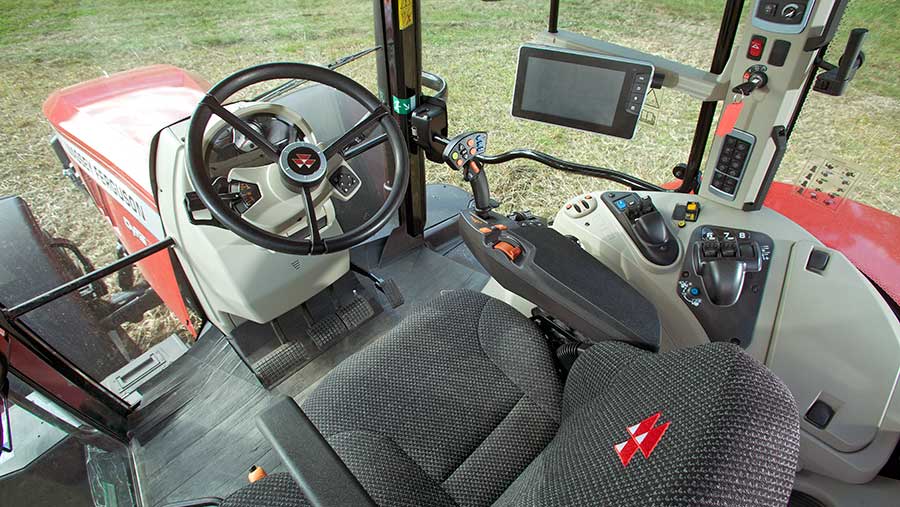 It’s not the quietest cab on the market either. But unlike some engine drones, the thrum of the Agco Power engine during hard work is far from intrusive.

Our test tractor came in the highest of the three spec levels, Exclusive, which brings in various high-end standard features such as electric spools, a high-end air seat, three-stage mechanical cab suspension and a multifunction joystick – this takes the place of the T-shaped transmission shifter, which is still standard filament on the more basic Efficient models.

This so-called Multipad joystick was one of the slicker controllers in our test, with the ability to adjust the transmission, engine cruise speeds, rear linkage, headland management, pto and a spool. It’s also Isobus ready, so functions on compatible implements can be programmed onto the buttons.

Less impressive is the interface for setting up the transmission’s auto functions, which has been unnecessarily complicated for years (see transmission).

It’s a shame that MF’s programmers didn’t manage to slot all of these settings into the new Datatronic screen. Instead, operators have to flit between this and the small dash display, as well as using a pair of scroll wheels on the right-hand console. 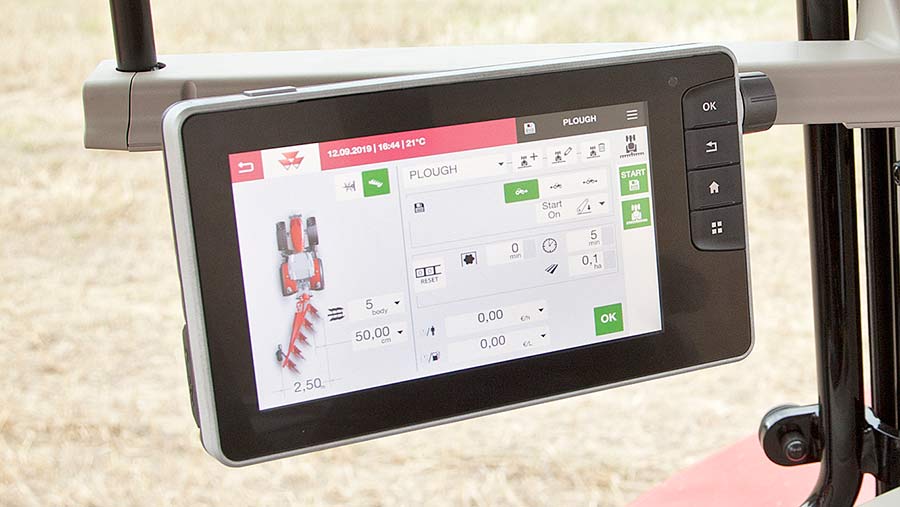 Massey is now on the fifth generation of its Datatronic control screen, which is shared with sister Agco brand Valtra.

The hardware on the two units is identical, but each manufacturer has produced its own software for it – unfortunately for Massey, the Finns have done a better job.

The tablet-style navigation means it’s still a big step up from the previous Datatronic 4, but the Valtra version is quicker, easier to navigate and accesses more of the tractor’s functions.

However, MF informs us it has recently updated the software, with an improved interface and speedier operation. 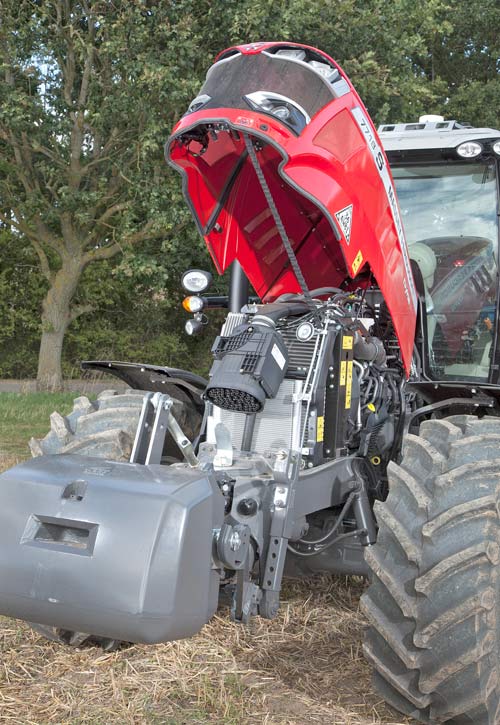 Like Valtra, all of Massey Ferguson’s six-cylinder tractors use a 6.6-litre or 7.4-litre Agco Power (formerly Sisu) engine. But while Valtra switches to the bigger block from 175hp, MF keeps using it in tractors up to 200hp.

On paper, that gives it a rated power output of 165hp, making it the lowest-powered tractor in the test. However, its maximum power is 180hp and with EPM, it will boost to 210hp.

Unlike some tractors, where boost has a fairly limited window of operation, MF has been pretty generous. This means boost is phased in at speeds as low as 6kph, meaning operators will actually get some extra power for cultivation tasks that don’t require the pto.

The only caveat is that the boost is phased in gradually, meaning its maximum power is only reached when travelling at speeds of 18kph or more.

Boost is also active whenever the pto is engaged or the hydraulics are operated, but the tractor does have to be moving more than 0.1kph for it to work.

On the dyno we recorded a max power of 179hp at the shaft, which tallies pretty well with the firm’s on-paper figure of 180hp.

From an operator’s point of view, there are a couple of options for programming engine revs and these can be linked to a target gear, creating an automatic driving mode in the field.

The Stage 5 7700-series models were launched at the Sima show in Paris and the main change – other than the Datatronic 5 screen mentioned above – was a tweak to the Agco Power engine to make it meet Stage 5 emissions regulations.

The engine was already designed with this standard in mind, so the upgrade simply involved upping the amount of AdBlue used (to about 6%) and adding an additional soot catalyst.

Our 7718S came with the 24×24 Dyna 6 semi-powershift that has been built by Agco/Class-owned transmission specialist Gima for 14 years.

During that time, it has earned itself a fairly solid reputation, but there are plenty of operators out there that never manage to get to grips with it.

At its core, it’s a simple enough setup – four electronically shifted ranges with six powershifts in each – but Massey has layered it with a plethora of customisation options that can be hard to find and tricky to get right. 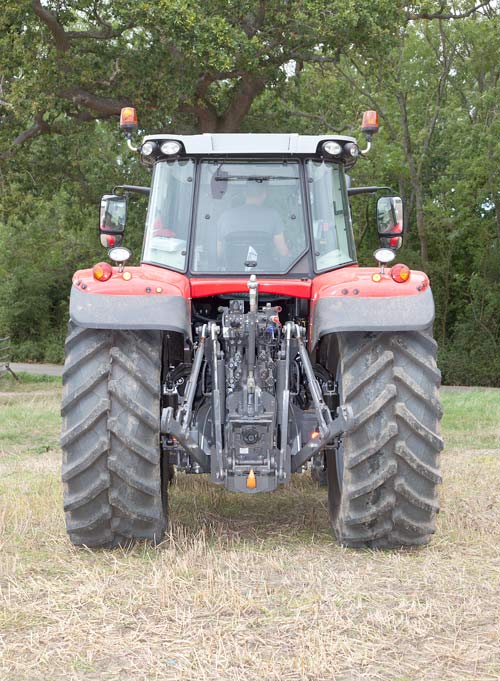 For example, in order to change the forward and reverse starting gears, the shuttle lever and joystick need to be shifted simultaneously while depressing the clutch. Anyone that hasn’t read the manual or been shown how to do it will never work it out.

Range changes are also slow, so when it’s set to road mode (hare) – which performs range changes automatically – uninitiated drivers can find themselves stuck without drive while they’re halfway across a junction.

This can be remedied by making sure the start gear is at the lower end of the powershift steps, or by keeping it in field mode (tortoise), so that the driver can shift range when they see fit.

Speed matching is pretty slick and on level ground it generally selects the most appropriate powershift ratio when performing a range change.

However, like all these systems, it can’t see approaching hills, so some driver intervention is required to get set up for a steep climb.

As for in-field automatic mode, there’ i no simple way of setting a target speed and letting the tractor manage revs and gearing to maintain it. Instead, the driver has to set a max gear and a max engine rpm for the tractor to work to.

When this is set right, it does a pretty good job, but other makers have found simpler and more intuitive ways of doing this.

It’s business as usual with the shuttle lever, which is capable of controlling the powershift steps, and declutching. There is also the option of having a park position, reducing the need to use the handbrake.

Like most of the tractors in this sector, the 7718S has a brake-to-neutral function that cuts drive when the brake pedal is depressed to reduce the need to use the clutch. However, Massey has deemed it unsafe for this to be activated at all times, so it needs to be turned on via the dash or Datatronic screen every time the engine is started.

There is also a switchable anti-stall system that drops the transmission into neutral if the tractor attempts to start in too high a gear.

Massey has recently introduced the option of 42in rear rims, which up the gearing, allowing it to reach 40kph at 1,500rpm and 50kph at 1,800rpm.

Given it was the lightest tractor in our test by some margin – at just 6.3t – the 7718S’s 8,100kg rear lift capacity is fairly impressive, as is the 4t it can haul on the integrated front links.

Maximum gross vehicle weight is also 14t, so it can carry a considerable amount of extra bulk. 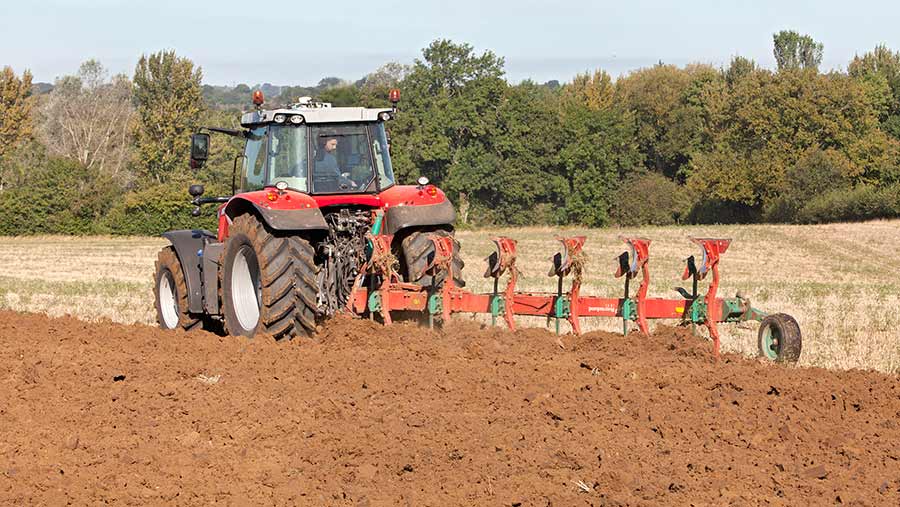 Generally, the linkage controls are pretty straightforward, with most functions handled by buttons on the B-pillar or armrest. Depth control is taken care of via a wheel on the armrest, which isn’t as intuitive as a slider, but works well enough.

Dyna 6 tractors come with up to four rear spools and there’s a 110-litre/min pump as standard, with an option of 150 litres/min.

Flow rates and timers can be set in the Datatronic 5 screen and there is the option of using the DTM system to increase engine revs when a spool is activated, giving peppier performance.

Massey Ferguson’s recent refresh of the smaller 7700-series tractors has effectively split the range in half.

All of the models listed above have the option of Dyna-6 or Dyna VT transmissions.