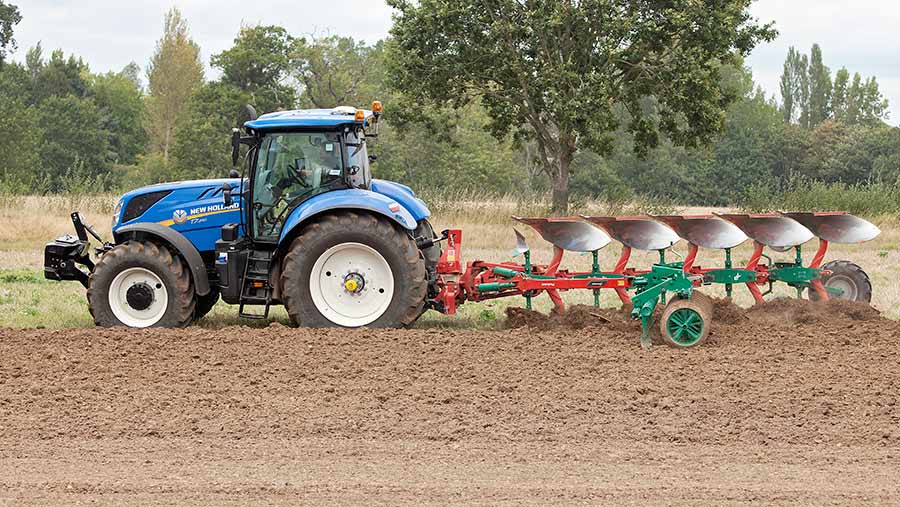 New Holland’s T7 might lack the glamorous cab offered by the likes of John Deere and Valtra – noise and space being its most obvious shortcomings – but there is something satisfyingly functional about the simple controls.

In base form, it also packs a lot of horsepower for the price, has strong rear lift and decent hydraulic output so, although the gearbox is a little clunky and old-fashioned, it’s a solid candidate for heavy fieldwork tasks.

New Holland’s cab feels aged, which is no surprise given that the same frame has been used on T6 and T7 models, as well as Case Maxxum and Puma equivalents, since 2003.

Minor updates to the roof, lights and controls have come since, but the package is distinctly old-fashioned compared with slicker rivals.

Materials remain robust, which is obviously the priority, but the likes of Valtra and John Deere now offer something significantly more comfortable, brighter and with better views, thanks to a slicker arrangement of pillars, roof and glazing.

Engine noise is the biggest issue and there is little insulation to soften the roar during intense cultivations work.

We found it particularly offensive after spending too much time in the Deere, which offers unfathomable serenity.

Access is also fairly poor – it’s high up, has steep steps and a relatively narrow entrance – but these details are more of an issue on smaller tractors where climbing in and out is frequent. 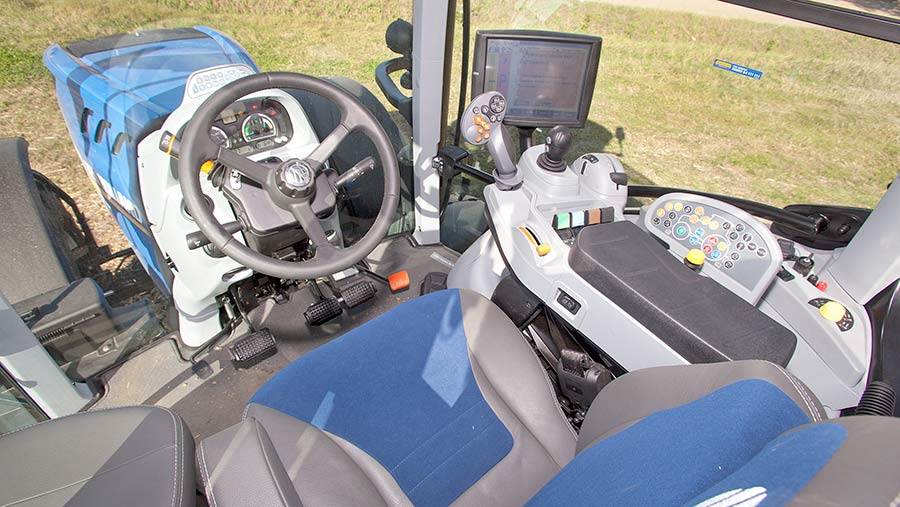 The cab’s age may be a downside, but the positive slant is that operators will never struggle to fathom the controls.

What it lacks in style, it gains in simplicity, with the Sidewinder armrest still central to operations – a setup that almost all NH’s high-horsepower tractors have been specced with for the past decade.

Key controls are dotted inside the silhouette of a tractor, making them easy to locate and avoiding too much involvement with the touchscreen. The depth control slider is appreciably simple, too, and the F/R shuttle is pleasant enough to use.

However, having to fork out an extra £445 for a park position and electric handbrake is less palatable (it is standard on CVTs).

Transmission functions are set on a rigid handstick.

It’s comfortable to grasp, but we would reconfigure the button layout – powershift steps should be positioned more prominently and it would be nice to select the direction of travel by nudging the joystick forwards or backwards, Fendt-style.

The graphics on the fourth-generation Intelliview monitor are positively vintage and the screen offers a fraction of the functions of more sophisticated foe, but it’s perfectly adequate for fieldwork tasks. 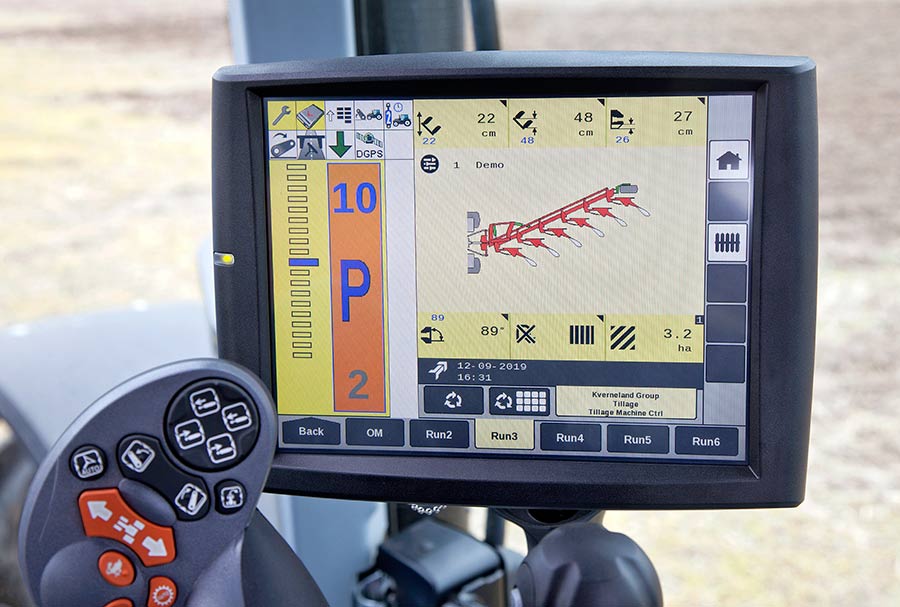 We actually found it offered far more detailed performance monitoring than the others on test, and all manner of fuel records, area meters and engine performance details are available to be set on the quick-view run screens.

Up to six customisable screen layouts can be set and, once they’re organised, there is little reason to go delving through the clumsily arranged software too often.

For the purposes of fieldwork, we had one screen displaying work data such as fuel consumption, wheel slip and engine load, a second for guidance and a third for the KV plough’s Isobus system.

All T7s – short- and long-wheelbase models, plus the HD versions – use the same FPT 6.7-litre engine, albeit with different injectors, turbochargers and radiators. 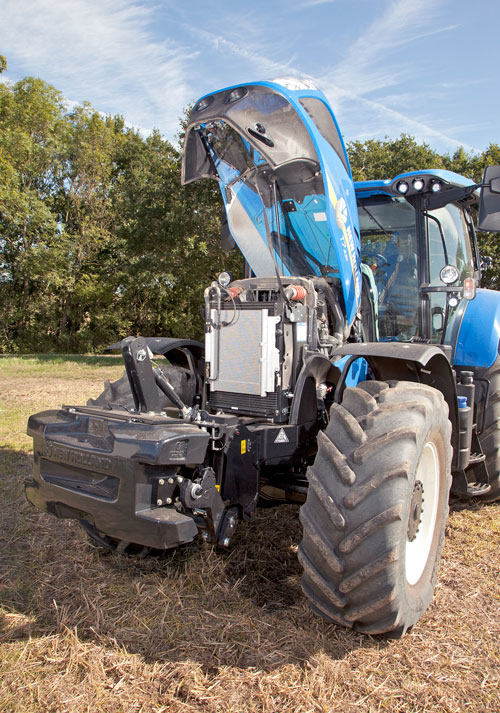 Despite having less than 100 hours on the clock at the time of testing, it delivered largely as promised – the dyno recorded 186hp rated and 189hp maximum at the pto shaft.

Those read-outs are pretty respectable given that it can take up to 1,000 hours for an engine to loosen up enough to produce its best.

However, it’s easy to be deceived by New Holland’s model numbering system, where the figure on the bonnet relates to the boosted output available only under certain conditions involving pto work and high-speed road transport.

Typically, the extra wedge of power – taking it to a peak of 225hp – is available above gear 13 (transport mode), or with a 20hp+ load on the pto shaft while moving.

A little icon appears on the dash when it is available, though it’s feathered according to the load, rather than being available all at once, to reduce unnecessary fuel consumption.

One of the T7’s differential features is the exhaust brake, which CNH has been offering on its mid-sized tractors for a few years.

It makes use of the exhaust flap that helps warm the engine quickly at start-up, stifling the airflow to reduce the workload of the brakes during haulage work and apparently increase braking efficiency by up to 40%..

As for emissions, New Holland has stuck doggedly to the simple SCR and DOC approach, so there is no exhaust recirculation system.

That means that AdBlue consumption is slightly higher than the Deere – expect a rate of roughly 7% – but there’s no expensive particulate filter to replace.

The shift to Stage 5 also saw engine service intervals climb from 600 to 750 hours and transmission oil changes increase by 25% to 1,500 hours.

Just like the cab, the 19-speed Power Command powershift gearbox is now more than a decade old.

It’s likely to be phased out in the coming years, with the three-range, eight speed double-clutch Dynamic Command system currently available in the T6s and Case Maxxums rumoured to be its replacement.

In its most basic form, the Power Command has 18 clutchlessly shifted speeds and a 40kph maximum, but higher-spec models have 19 speeds that delivers 50kph, or 40kph at lower revs.

The gearbox has fewer speeds than its rivals, so shifts are a little more noticeable, but it’s the clutch pack move between 12 and 13 that is most aggressive.

Though New Holland has done work to lessen its lumpiness, it is best avoided when under any sort of load, particularly soon after start-up, when the oil is still cold.

It also means the road-going auto mode won’t downshift below gear 13 to avoid any big breaks in drive.

Auto field mode is distinctly unsophisticated. The easiest way to set it is to find a comfortable working speed – abotd 7kph in the case of our ploughing work – and press the auto button.

This initially forms a range of plus or minus two gears either side of the one engaged, though it can be tweaked up to a 14th gear ceiling (which equates to 19.9kph at full chat) using the up/down shift buttons.

We found automatic gear shifts on the slow side, so in fields with variable soil types, it is easiest to control things manually. 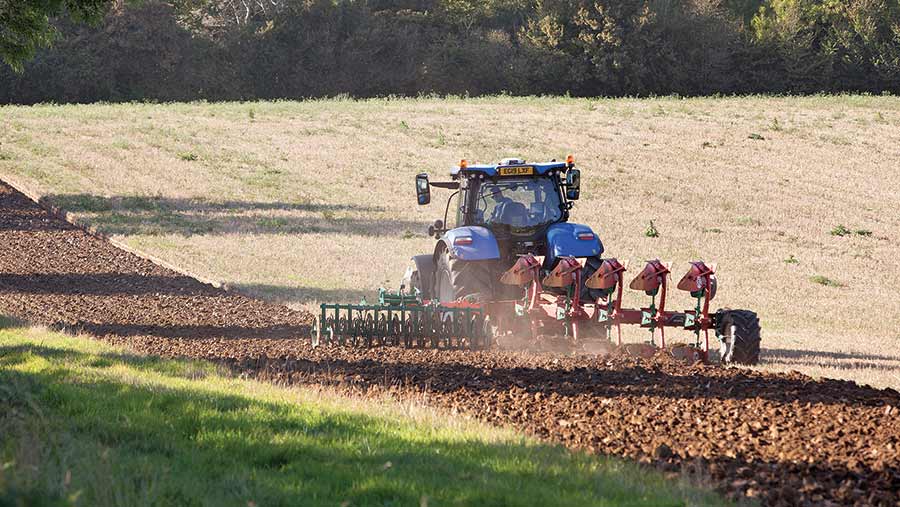 It means the driver still decides on the revs – most likely via the hand throttle – and it’s not possible to set a target speed.

Unlike the sophisticated Deere, it has no intelligent way of improving fuel consumption, so efficiency relies almost entirely on the driver.

In reality, keen operators might find the gearbox a bit short of features, but there is no disputing the ease with which anyone can jump on and drive.

One of its strong points is the custom steering system, which can be included in a headland turn sequence or fully engaged.

It allows the number of turns from lock to lock to be varied from four to one, but is speed dependent – a sensible move, as it is impossible to keep the tractor on the straight and narrow above jogging pace. 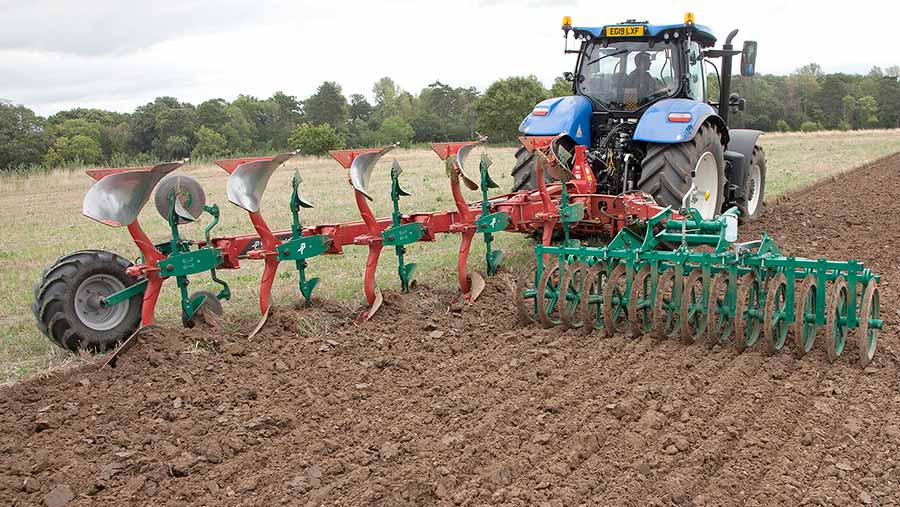 Given that the 230 falls into New Holland’s long wheelbase T7 range, its lifting stats make for impressive reading in this power category.

Almost 10.5t capacity at the ball ends means it will rarely be found wanting in the lifting department, and its 150-litres/min pump is also strong.

Four rear spools are standard, but their layout is irritating – the two paddles nearest the driver are positioned on the right-hand side of the hydraulic block, which means operators have to traipse around the implement to plug the pipes in.

We also had the £364 optional hydraulic top link, which comes in handy when getting mounted cultivators set up in the field.

The rear spools are controlled via a row of chunky, unfussy paddles, which we really liked.

Two of them are replicated on the main handstick, and there is an optional electro-hydraulic joystick to control three mid-mount valves, including the front linkage.

Standard models come with a 159cc engine-driven air compressor to run the trailer brakes, but there is also the option of a 213cc version for those interested in fitting a central tyre inflation system.

New Holland drills the trumpet housing and sources the hardware from Tractair, which it can run via Isobus through the Intelliview screen.

This allows particular pressures to be attributed to specific implements, so they are automatically inflated or deflated when the item is selected. The fully integrated system on a bar axle costs £7,500.

There is also an anti-jackknife system that keeps the drivetrain taut to avoid the trailer pushing the tractor. It is standard on 50kph transmissions and is a useful safety system for slurry tankering and hauling silage on freshly cut grass.

The range is now pretty vast, with four short-wheelbase variants running from the 140hp T7.175 to the 180hp T7.225. The biggest model would have been a more natural fit in our test, but it’s only available with a CVT gearbox.

There is also a three-model heavy-duty range that runs from 250hp to 300hp.

All T7 tractors use the same 6.7-litre engine, though ancillary components are beefed up to suit the power outputs.

The block comes from sister brand FTP and a lot of the other components are also built in-house, including the front axle, cab shell and transmission, which all roll out of CNH factories across Europe.

Most models have two gearbox options – the full 18- or 19-speed Power Command powershift, which is most popular in the smaller versions, and the Auto Command CVT. As a rough guide, the jump from powershift to CVT costs £5,000-£6,000.