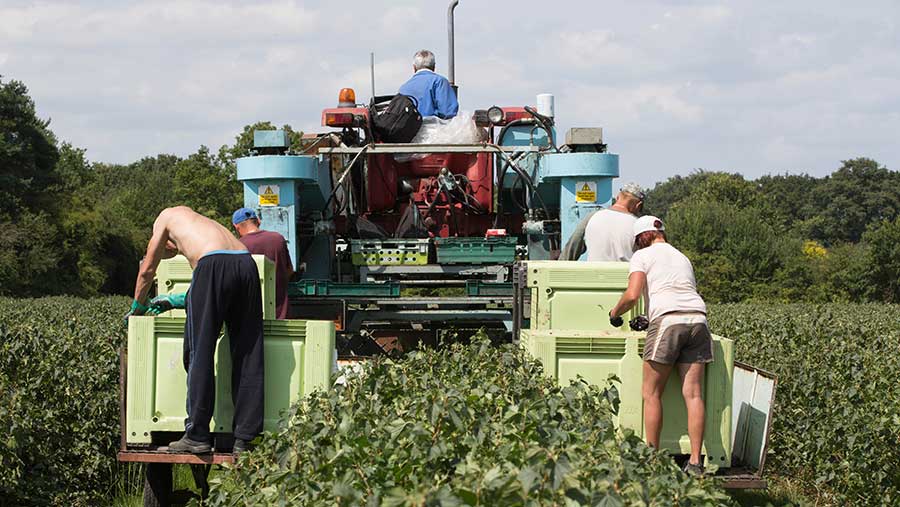 The number of seasonal workers coming to work on British farms has dropped 17%, leaving some farms critically short of people to harvest fruit and vegetables.

This is the headline figure in the NFU’s latest survey on the Supply of Seasonal Labour to British Horticulture Farms, published on Friday (23 June). The NFU warned that some farms would be critically short of migrant labour this harvest.

Meanwhile, a BBC survey of growers between 16 May and 5 June found 78% of respondents said recruitment had been more difficult than last year, with 20% saying it had been the hardest for years.

The NFU said Defra secretary Michael Gove must provide reassurances to growers that farms will be able to access a reliable and competent workforce, both today and after Brexit.

Here are nine key findings of the NFU report:

1. May 2017 saw a significant decline in the availability of labour, with responding providers unable to meet their recruitment targets by 1,515 people (16.7%).

2. Farmers recruit 75% of seasonal workers from Romania and Bulgaria, with the remainder largely from other eastern European countries, including Poland and Lithuania.

3. Labour providers recruited 6.7% fewer workers than needed between January and May 2017, compared with over-recruiting by 6.6% for the same period last year.

4. The fall in numbers of seasonal workers began in April; prior to this month all labour providers indicated they were able to meet the needs of the sectors they were supplying.

5. By May, four providers were unable to fully meet the labour requirements of the farms they supplied, reporting shortfalls of between 10 and 25%

6. The proportion of returnees has dropped progressively throughout the first five months of the year from 65.3% in January to 33.2% in May.

9. UK citizens account for less than 1% of the sector’s seasonal workforce.

(The NFU survey represents 30% of the total seasonal labour supply – 80,000 seasonal workers – to the horticulture sector).