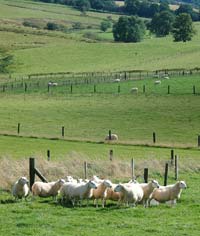 Farmers in Scotland are being urged to be vigilant after a spate of sheep rustling in the Lothians and Borders.

About 300 sheep have been stolen from farms in Galashiels, Fountainhall, Westruther and Cockburnspath over the past few months, prompting NFU Scotland to join forces with local police to tackle the problem.

Farmers in the region have been asked to report any suspicious behaviour, including any unusual livestock transport vehicles in their area.

Abattoirs and butchers have also been urged to watch out for stock being offered from unexpected sources.

Lisa Roberts, NFU Scotland regional manager, said it was worrying a trend of rustling seemed to be forming.

“Though we now have a significant number of sheep thefts that have occurred throughout these parts it is unlikely that Lothian and Borders is alone in facing this problem, and the warning goes out to livestock farmers around the country to be on their guard,” she said.

“The property taken includes not just livestock but ranges across plant, machinery, quad bikes, and break-ins to homes,” he told the BBC.

“To take the property it is most likely that vehicles have to be used and most incidents will take place during the hours of darkness.

“Those responsible also appear to have a good local knowledge of the areas they have targeted.”

Police are carrying out extra patrols in the Borders but have asked people to report any suspicious vehicles spotted in the area.