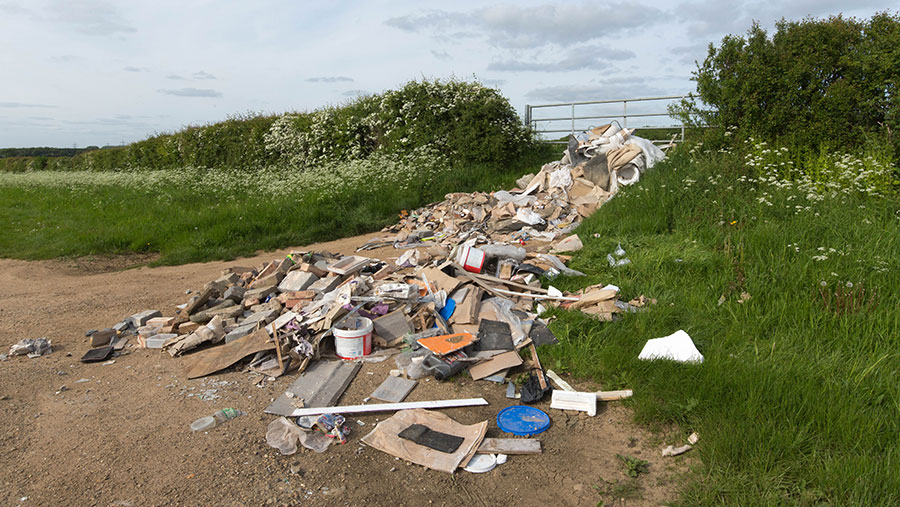 Nearly 50,000 people have signed an open letter demanding immediate action to tackle fly-tipping in the countryside, following a surge in waste crime during the Covid-19 lockdown.

The National Farmers’ Union (NFU), which collected signatures for the letter online, said the numbers demonstrated the strength of feeling to create a safer, cleaner and greener rural Britain.

The letter will be sent to newly elected police and crime commissioners (PCCs) and urge them to tackle fly-tipping as a priority to prevent the countryside from “being turned into a rubbish tip”.

The NFU believes the current system of reporting fly-tipping is “frustrating and confusing”, which means the true scale of the problem is hidden.

“Many farmers and landowners are the victim of this crime, as they have to spend time and money cleaning up other people’s rubbish,” the union says.

The letter demands PCCs take action to tackle fly-tipping, including working with the UK government, local authorities, landowners and the waste sector on prevention, clean-up and prosecution.

The NFU is also seeking the following measures:

However, both the NFU and Country Land and Business Association believe this figure is just the tip of the iceberg, as it does not include fly-tipping incidents on private land.

Despite a number of industry campaigns to raise awareness of the damaging effects of fly-tipping in the countryside – including Farmers Weekly’s Stop the Blot campaign in 2017, it remains the responsibility of the landowner to clean up any waste deposited on private land.

A recent National Sheep Association survey of farmers found that incidents of dog attacks on sheep have also surged during the lockdown, with an increase in dog ownership blamed for the spike.

NFU deputy president Stuart Roberts said: “Not a week goes by where I don’t hear from a farmer about an industrial-scale amount of rubbish being dumped on their farm, or a farmer losing sheep because of a savage dog attack on his flock.

“Such incidents are devastating for a farmer. Not only does it hurt their ability to produce food and damage the work they’ve done for the environment, but it has a huge toll on farming families.”

Mr Roberts added that he hoped the election of new PCCs will “act as a reset moment” and he urged them to take rural crime seriously and “level up policing in both urban and rural areas”.