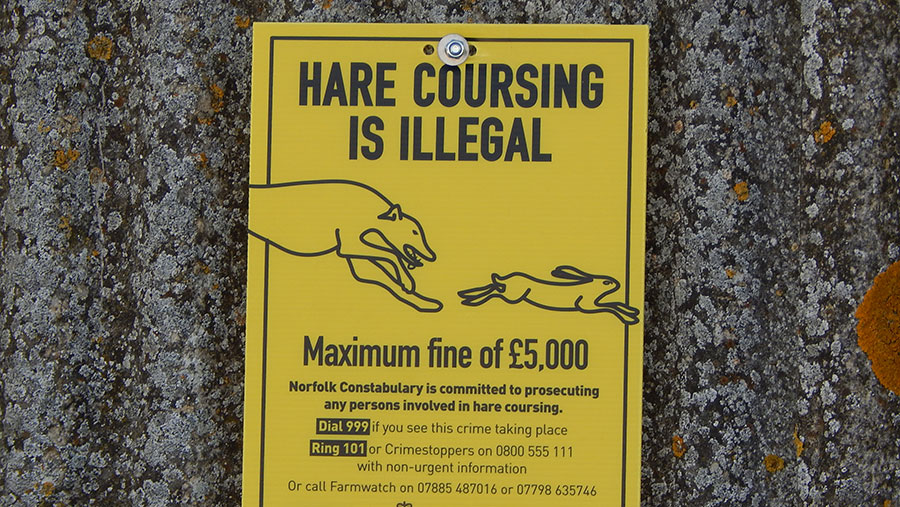 After years of intense lobbying, a coalition of countryside groups have declared a breakthrough in efforts to tackle illegal hare coursing on farms.

Landowners’ organisation the Country Land and Business Association (CLA) says it has finally received confirmation from the UK government that tougher penalties will be introduced for offenders.

Hare coursing involves the pursuit of wild hares by trained greyhounds or lurchers across bare fields, often carried out by organised criminal gangs.

Large sums of money are gambled online on which dogs will catch the hare first – and events are being streamed live to betting syndicates as far away as China.

The illegal hare coursing “season” usually gets under way after harvest, when poachers take advantage of bare fields. This causes thousands of pounds worth of damage to land and crops, and sees many farmers and landowners intimidated.

The CLA, together with the British Association for Shooting and Conservation, Countryside Alliance, National Farmers Union, National Wildlife Crime Unit and the RSPCA, have been campaigning for tougher penalties to be sanctioned through an amendment to the Game Act 1831.

Defra has now confirmed its intention to introduce new legislation through the courts to increase penalties for coursers.

The proposed amendments (See “Defra crackdown on hare coursing”) will give the police and the courts greater power to tackle offenders in the field, remove the tools of their trade and impose stiffer penalties at conviction, including unlimited fines and up to six months in prison.

“This feels like a real breakthrough for the rural community,” said CLA president Mark Bridgeman.

“If the government can pursue its promise of enforcing harsher penalties, this could be instrumental in deterring hare coursing from taking place.

“Many of our members live in fear of being targeted, as we know how vicious the people who take part in this type of rural crime can be. A clampdown is long overdue, and it’s now looking more likely. We must now keep up the momentum to see this act amended.”

A survey last month by the Yorkshire Agricultural Society confirmed the effect on victims, and many have reported receiving threats, assaults, damage to property, experiencing livestock harm and having to invest considerable sums to deter vehicles from destroying crops.

The survey of more than 300 people found that in 82% of cases the same farm had been targeted at least three times since the start of last year.

Give police the tools to combat hare coursing

Mr Fuller proposed a private members’ bill in the House of Commons to tackle hare coursing, which includes stronger guidance on sentencing, a higher limit for certain penalties and giving the police the tools to combat the crime. It is scheduled for a second reading on 21 January 2022.

Mr Fuller said his bill aims to remove “arcane” legislation dating back to the 1800s and become the “defining law for the crime of hare coursing”.

“I will seek changes to give the police the tools they need to do the job – for example, as part of a prosecution, to recover and enforce the costs for kennelling of dogs seized from the offenders. It will also seek stronger guidance on sentencing and a higher limit for certain penalties will also form part of my bill.

It states: “Although hare coursing is prohibited under the Hunting Act, it remains a serious problem. As well as being an important animal welfare issue, its continued practice causes serious harm in rural communities through associated criminality.

“Our proposals will provide law enforcement with more tools to address the issue effectively, and thereby serve to protect our brown hare population and our rural communities from this barbaric practice.”

Defra has now outlined its intention to do the following: