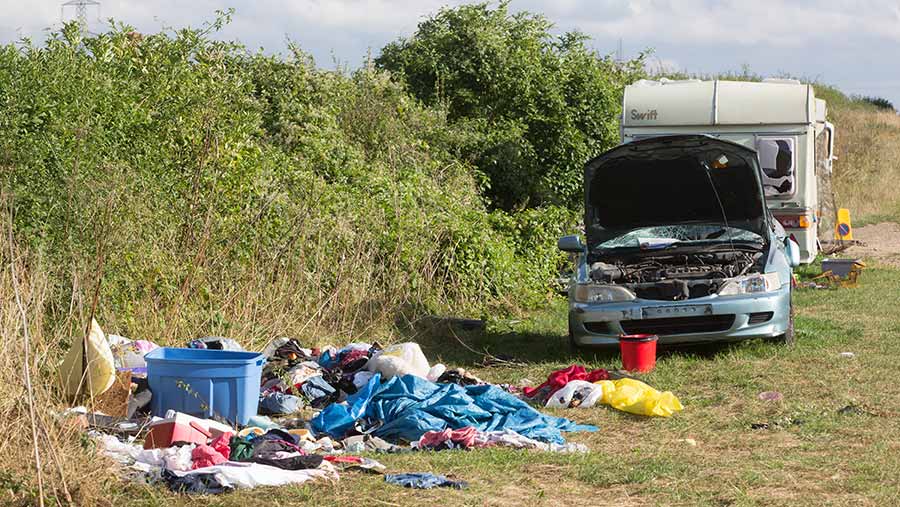 A petition urging ministers to make trespassing a criminal offence to stop travellers moving to private land is gaining momentum.

Almost 30,000 people have signed an online petition calling on the government to make entering and occupying land without consent a criminal offence.

The petition says making trespass a criminal offence would give police the powers to arrest without warrant, remove, store and dispose of objects, and issue penalties and court proceedings.

Other countries already have provision in law for this. In Ireland, the Criminal Justice (Public Order) Act, 1994, was amended in 2002 to address this issue.

James Brokenshire, the communities secretary, has held discussions with his Irish counterpart to see how the law works in Ireland.

Currently, trespass on land in the UK is not, for the most part, treated as a crime. It is a civil matter.

Prevention of trespass is the responsibility of the private landowner, not the police or the council.

Aggravated trespass is a criminal offence, and if damage is caused to land or property, or if there is threatening, abusive or insulting behaviour towards the landowner, the police have the power to act.

But police are often reluctant to get involved as they don’t have the manpower.

Over the past 12 months, Farmers Weekly has covered stories of farmers and landowners who have been left to pick up the cleaning bill after their land has been occupied for a few days by travellers.

In May, Berkshire farmer Colin Rayner said he was left with a £10,000 bill after a group of travellers set up camp on a field in Surrey. Mr Rayner told Farmers Weekly that the travellers used portable angle grinders to tear off locks from gates before seven caravans occupied the site.

The landowner, Wisley Property Investments, employed a security guard with a dog at the gate to prevent further caravans from entry. But police told Mr Rayner that under the Human Rights Act, the travellers had the right to come and go from the field.

Mr Rayner, who has signed the petition, said: “The incident ended up costing the landlord many thousands of pounds in security guards, bailiffs and clear-up costs.

“The Environment Agency came out and said we had to clear up the fly-tipped waste that they left. Fly-tipping is the biggest risk to UK agriculture. The costs are enormous.”

Responding to online petition, the government said it was considering the responses of a consultation on “the effectiveness of powers to deal with unauthorised development and encampments, before deciding any further action”.