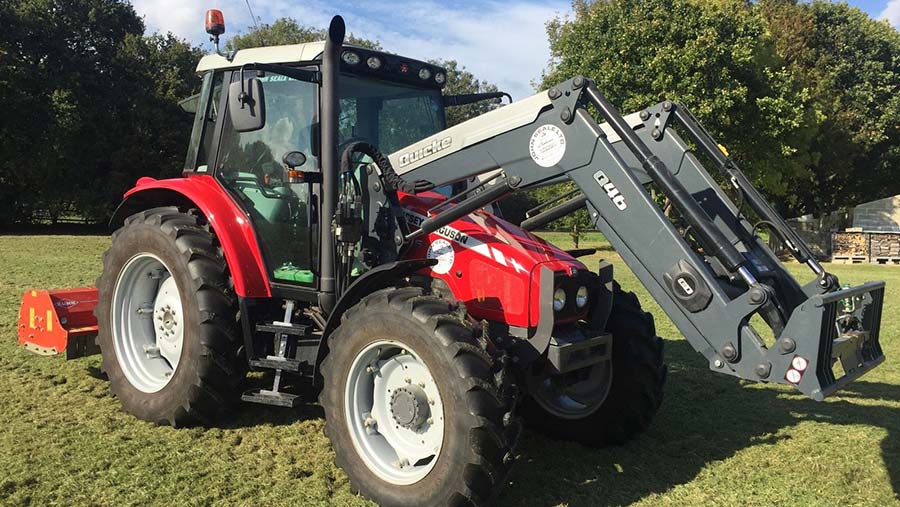 The Massey tractor Iain MacFarlane thought he was buying

A second farmer has fallen for an online tractor ad scam – and lost all of his life savings.

Iain MacFarlane, 49, warned other farmers not to fall for the same trap after he was coerced into parting with £20,000.

Mr MacFarlane, who owns a smallholding in the Inverness area, said: “It’s a complete disaster. I have lost everything I have saved for. I don’t know what I am going to do going forward.”

The devastated farmer, who also works as an agricultural contractor, said he sent £10,500 to the fraudulent vendor of a red 2011 Massey Ferguson 5455 tractor and Quicke loader, in mid-March.

Mr MacFarlane sent the payment online to what he believed was a secure PayPal link – but the link later turned out to be fake and the money was deposited straight into the fraudster’s bank account.

To make matters worse, Mr MacFarlane also sent the scammer an additional £9,500 to pay for a grass cutter that was also being advertised.

The fake vendor promised him he would send both items by uShip and he sent him a fake text message saying his order had been dispatched.

But when neither item arrived by the following Tuesday, Mr MacFarlane realised something was wrong.

“A friend told me about the story of beef farmer Douglas Ledger in Farmers Weekly who had lost £10,500 in the same scam. My heart sank. It was a horrible feeling when I realised what had happened.”

Mr MacFarlane has reported the fraud to Police Scotland and investigators from Inverness CID are actively working on his case.

“I wrote down the sort code and bank account details of the fake vendor and the police have traced it to a branch in Peterborough,” said Mr MacFarlane. “But for all I know, these could be fraudsters working out of Uganda or Mexico.”

Similar to the fraud involving Mr Ledger, the fake vendor only communicated by email. The scammer also told Mr MacFarlane he could not view the tractor in advance as he had “recently moved to the Isle of Man”.

Mr MacFarlane also sent the fraudster a copy of his passport as part of the shipping transaction. He is concerned that the fake vendor may use it for further criminal activity.

Farmers Weekly has since learned that the Massey 5455 tractor belongs to a man in County Donegal, Ireland, who bought it for £33,000 last year from a seller in Hampshire who had advertised it on eBay. It would appear that the fraudster used the photos from the eBay ad to create his own fake ad on Gumtree.

A spokesperson for Gumtree said: “Gumtree do not tolerate fraudulent activity on our platform. We are appalled to hear of this incident and are totally committed to tacking scams like this one and educating people about how to avoid them.

“Gumtree lists prominent safety advice for buying and selling, and we have an advice page on how to spot a scam on our website.

“We have a dedicated safety team that work hard to identify and remove fraudsters from the site and are also in contact with police and other authorities on a regular basis to help prevent scammers from operating and aid criminal investigations.”

Tips to avoid falling victim to a machinery scam

Farmers have become a prime target for cyber crooks and there is more need than ever to protect farm businesses from becoming the next victim.

In the UK, fraud and cybercrime is committed every four seconds, according to the Office for National Statistics (ONS).

And farmers are considered to be at particular risk at certain times of the year when farm subsidy payments are made.

As a buyer you should:

As a seller you should:

Protect yourself against shopping and auction fraud:

If you believe your business has been the victim of fraud or cybercrime, you should report this to Action Fraud on 0300 123 2040 (service available 24/7) or via the website.

Do you recognise the Massey tractor pictured above? Did you previously own it? If so, email philip.case@proagrica.com