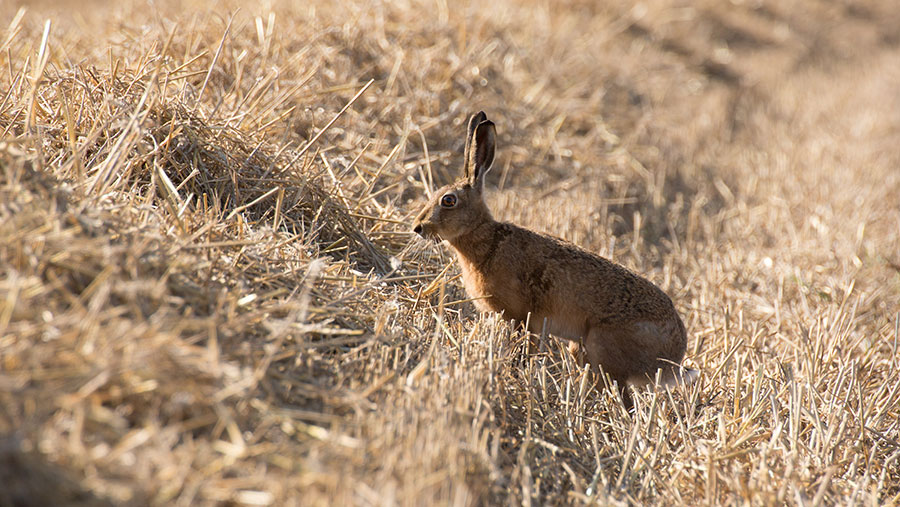 A Suffolk young farmer has captured the terrifying moment hare coursers in two cars ripped through a field before speeding off down a country lane – narrowly missing onlookers.

Katherine Cross, 21, filmed the trespassers in the field near Walsham le Willows on Tuesday (29 September), after other farmers in her rural crime WhatsApp group posted an alert that hare coursers were in the area.

As the four-wheel drive vehicles speed towards the field exit, Ms Cross’s mother shouts “watch out” to a woman standing by the gate. The driver of the second vehicle – his face covered – then makes a rude gesture and shouts as he accelerates away in a grey Subaru Forester.

A check on the government’s online database of MOTs revealed the Subaru vehicle – registration ST51 KNS – had its last test in November 2016.

Ms Cross told Farmers Weekly: “They flew across the field and didn’t look to see what was coming on the road, fortunately there was nothing coming, and the lady standing by the gate was lucky not to be hit.

“We heard that they also went on a farmer’s freshly drilled field and destroyed it.”

The young farmer said the WhatsApp group had pinpointed where the hare coursers were throughout the day, as farmers reported them in their fields or driving through villages.

Ms Cross added: “What would be a real help is if rural crime [police] officers were in that chat, they would be able to see all the updates.”

A spokesperson for Suffolk Police said officers arrived at the field at about 2.45pm, but the offenders made off and were not located.

In a separate incident elsewhere in Suffolk on Tuesday, officers were called to reports of hare coursing at 1.55pm in Lords Lane, Ousden.

Around 25 minutes later, a VW Golf estate was subsequently seized and two men from Kent were reported for the offence of hunting a wild mammal with dogs.

Hare coursing is a particular issue for farmers at this time of year as poachers take advantage of bare fields after harvest.

The NFU and the Country Land and Business Association have called for stronger action, including increasing police powers and the fines for offenders.

Three suspected poachers have been kicked out of North Yorkshire and face a day in court after their criminal activity was interrupted by police.

North Yorkshire Police was called just after 5pm on Monday 28 September, to a report of suspected poaching on land, north of Bedale.

The three men, all in their thirties and from outside North Yorkshire, were interviewed and reported for summons for hunting with dogs.

The trio were issued with a dispersal notice, ordering them to leave North Yorkshire immediately, and not return for 48 hours – or face being dealt with for a further offence.