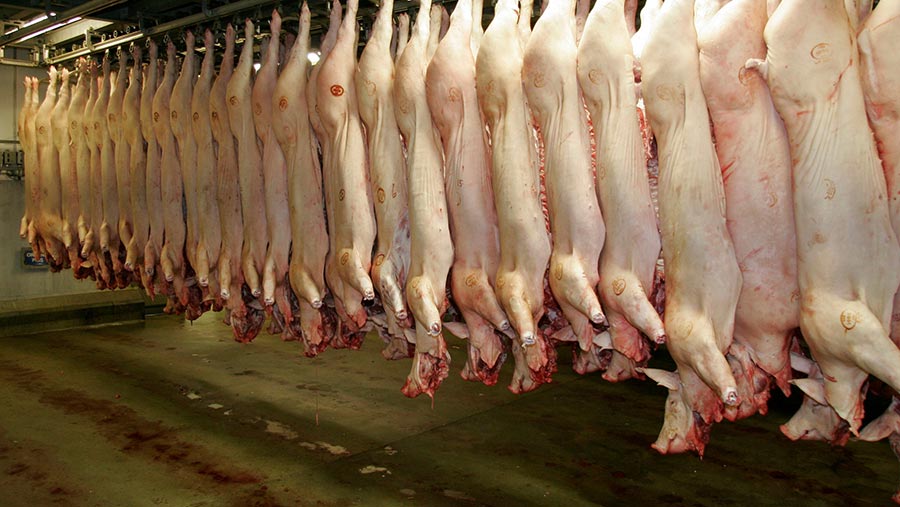 Defra farm minister Victoria Prentis has ordered a review of fairness in the supply chain after a summit on the worsening pig industry crisis.

A backlog of an estimated 200,000 pigs has built up on UK farms due to post-Brexit and Covid labour shortages.

And with growing pigs on farms longer, processors have applied swingeing discounts of 50% to overweight animals.

Producers have received as little as 70p/kg deadweight for pigs, while daily feed, bedding and other housing costs have soared.

Announcing the review, Mrs Prentis said: “The effects on pig farmers have been devastating, and it is clear that many contractual arrangements are simply unfair.

“Our Agriculture Act includes provisions to address this unfairness, and we are launching an immediate review of supply chain fairness in the pig sector.”

She acknowledged that the pig sector had been hit by the loss of the Chinese market for certain pig processors, disruption in carbon dioxide supplies and global labour shortages.

“We want to hear from industry about improvements to fairness and transparency that could be made to ensure a profitable and productive future,” Mrs Prentis said.

“We will begin engaging with industry on this straight away, with a consultation expected later this year.

“This will come in addition to the measures we have already introduced to address the current challenges including temporary visas for up to 800 pork butchers.”

Both schemes have recently been extended until the end of March.

Speaking after the summit, BMPA chief executive Nick Allen said the schemes had not had the desired effect because of strict conditions imposed.

The slaughter incentive payment came with a caveat that pork produced on these shifts should be exported.

But the incentive was not cost effective due to restrictions on exports imposed since Brexit, and EU pig prices being 30p/kg below British values, Mr Allen said.

Likewise, the private storage aids were not attractive because demand for pigmeat was strong. All efforts to process pigs were devoted to meeting that demand.

It made no sense to put meat into cold storage that could be sold straight away, Mr Allen said.

Also, once it had been frozen, the value of meat was far lower than fresh pork, making storage even less of an incentive, he explained.

National Pig Association (NPA) chairman Rob Mutimer added that, although the talks had been full and frank, the key issue of labour shortages remained.

“We always knew there would be no simple solutions, and we thank Victoria Prentis for her commitment to bring the industry together to try and find some answers,” Mr Mutimer said.

“However, what has become very clear is that much of this problem ultimately boils down to access to labour – and that is within the government’s, and nobody else’s, gift.

“The labour issue is the responsibility of other government departments and that is where the barrier lies,” he said.

Stressing the urgency, Mr Mutimer added: “There is now a list of actions from the summit, and the urgency is to identify who is going to do what, and when, because timescales for this are basically yesterday. Producers are desperate and need action now.”

NFU president Minette Batters echoed Mr Mutimer’s view. She called for an urgent solution in the face of a desperate struggle for pig producers.

“We are witnessing the first-ever cull of healthy pigs in this country, with the backlog on farms now in excess of 200,000 pigs.

“It remains critical that the government looks at providing financial support to those farmers most affected.

“I would also urge government to simplify the skilled worker visa route to allow more butchers to be recruited, and to make use of public procurement to source British pork,” she added.

Mrs Batters also commented that although the supply chain fairness review was positive, it would do nothing to alleviate the crisis taking place on pig farms across the country.

“The whole industry and government now needs to pull together to resolve this crisis.” 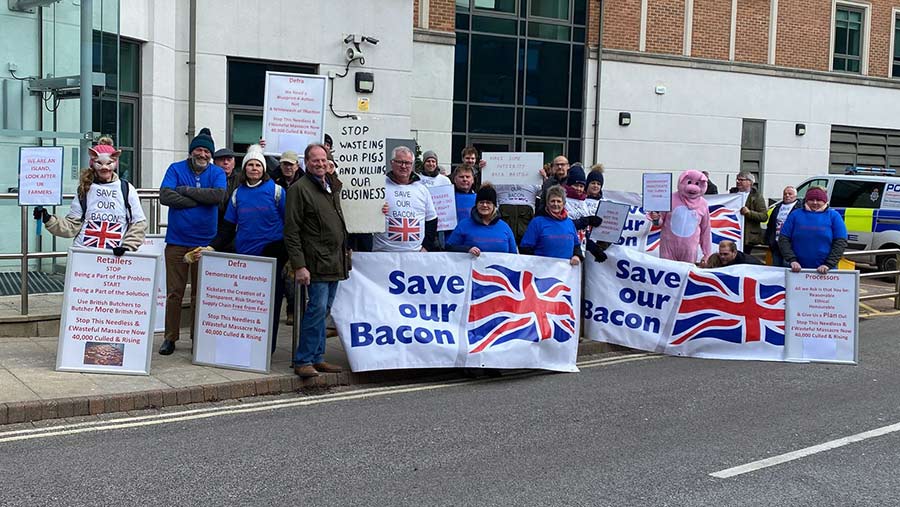 Yorkshire-based pig producers Kate and Vicky Morgan explained the stress and struggle they have faced.

The Morgans farm at Pockthorpe, East Yorkshire, has 1,700 breeding sows and they have tried desperately to house the excess of pigs.

Both Kate and Vicky took part in a protest outside Defra’s York offices while the summit was taking place in London.

“We have pigs in all sorts of temporary accommodation and have run out of space to house any more,” Kate told Farmers Weekly after the protest.

Cleaning and disinfection routines have been badly disrupted and she is concerned that the health status of the herd could be damaged for years to come.

The financial hit has been huge, Vicky added. Since last July, the farm has seen cashflow drop by £300,000. And, there is no end in sight to the hardship.

“We have just been told that contracts for another two batches have been cancelled because there is no slaughter space to take the pigs,” she said. “That means yet more space will have to be found.”