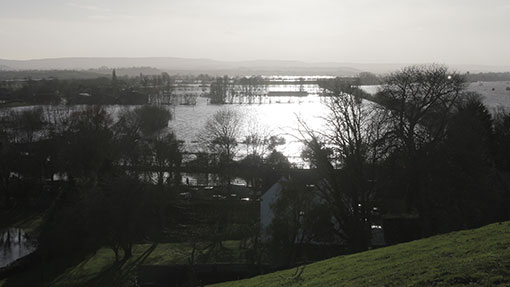 Dredging and waterway maintenance is crucial to the survival of the Somerset Levels, local campaigners have warned.

River and waterway maintenance and management must be undertaken to the workable standard that it was 20 years ago, said the Flooding on the Levels Action Group (FLAG).

The group issued the warning in the wake of discussion about the costings and cause of floods that have devastated the Somerset Levels over the past two months.

FLAG said it recognised dredging was not the sole solution to problems on the levels. But it needed to refute claims from the environmental lobby that dredging was unnecessary.

“Climate change is not the main cause of the flooding on the Somerset Levels,” said a FLAG statement.

See also Flood hit farmers – how you can help

Rainfall experienced this year is just 10% more than the previous wettest winter when there was no flooding event.”

Upper catchment management would alleviate flooding on the Somerset Levels, but dredging and maintenance of the waterways are crucial for overall success, the statement added.

“Dredging and waterway maintenance is the most cost-effective way to minimise flooding on the Somerset Levels and protect the towns of Bridgwater and Taunton,” said the group.

DEFRA secretary presented a 20-year flood action plan to protect the Somerset Levels and moors to parliament earlier this month.

The Environment Agency would start repairing damaged riverbanks and dredging about five miles of the River Parrett as soon as it was “safe and practical” to do so, he said.

The plan also considers how to address flood risk in the longer term.

“Local partners will set up a new body to take more responsibility for water management on the levels, and will establish new ways of funding this,” Mr Paterson said.

As part of the plan, farmers will be expected to take undertake special catchment sensitive farming measures to help prevent a repeat of this year’s floods.