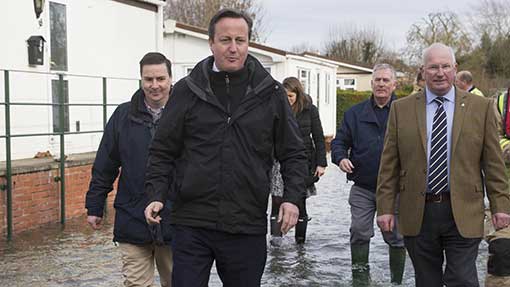 Prime minister David Cameron has pledged a £10m fund to help farmers recover from the floods.

Speaking during a press conference at Downing Street, Mr Cameron insisted “money was no object” when it came to flood relief.

He hinted that grants would be made available for homes and businesses to help rebuild flood defences.

The prime minister also announced plans for a tax deferral system aimed at helping affected businesses, while insurance companies would be asked to “pay up the money fast”.

See also:﻿ Flood-hit farmers: how you can help

But with more bad weather forecast for the next few days, Mr Cameron warned that the flood crisis could get worse before it gets better.

The prime minister has cancelled a visit to the Middle East next week to stay in the UK and focus on the government’s response to the floods.

“Nothing is more important than dealing with these floods,” he said.

“Whatever money is needed for it, it will be spent. We will take whatever steps are necessary.

“There is absolutely no sign of this threat abating, and with further rain and strong winds forecast throughout the week, things may get worse before they get better.”

A new Cabinet committee will be formed, chaired by Mr Cameron, to oversee the flooding recovery. The committee will have its first meeting on Thursday (13 February).

Met Office forecasters are warning that further wet and windy weather this week could bring more disruption to parts of the UK.

A spokesman said: “Wednesday will see a vigorous low pressure system move in from the West, bringing a band of rain and gales across the country.

“About 10-20mm of rain is possible fairly widely, with 20-30mm possible in parts of Wales and south-west England.

“The strongest winds are expected during the afternoon and evening across Wales and northern England. Gusts of 70-80mph and perhaps as high as 90mph are possible around exposed western areas, with 50-60mph generally across inland and southern areas.”

Currently, there are 14 severe flood warnings for Berkshire and Surrey, while two more remain in Somerset.

Meanwhile, farmers and hauliers are working around the clock to deliver supplies of fodder and bedding to flood-hit farmers in Somerset.

Farm leaders have warned that the flood crisis could last months and they have called for more donations of fodder and money to help those whose businesses have been crippled .