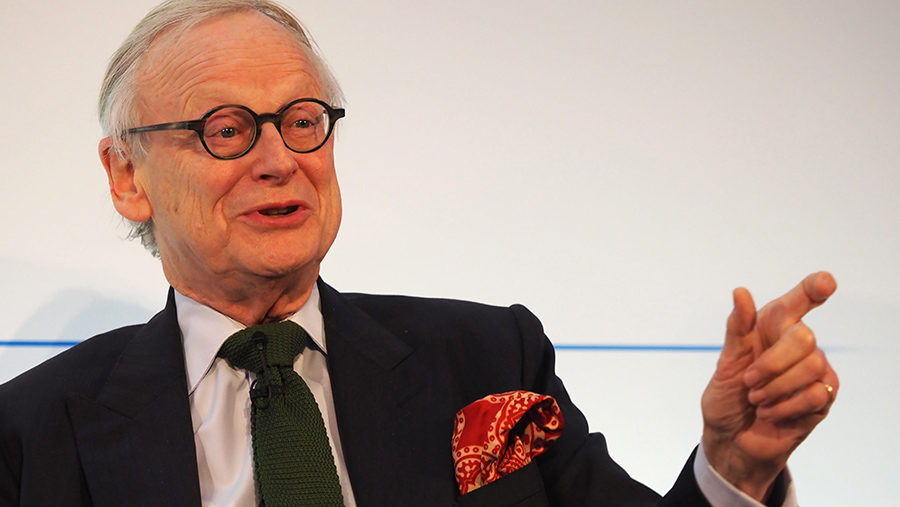 Speaking exclusively to Farmers Weekly, Lord Deben said: “Farmers are going to be asked to do a lot of things, and they cannot do that if they are trying to compete with people who don’t do that. The issue of imports becomes really important.”

The latest government target is for a 78% reduction in emissions by 2035 compared with 1990 levels.

Scientists say the cut is vital to keep any rise in global temperatures close to 1.5C above pre-industrial levels.

The target has added significance for farmers because it encompasses the government’s agricultural transition period.

Who is Lord Deben?

He served as agriculture minister from 1989-93 and was environment secretary from 1993-97.

This includes the phase-out of direct payments in England by 2028 and a new support system based on environmental measures.

Describing the government’s emission targets as enormous, Lord Deben said it was clear UK farmers would have a “very real role” to play in mitigating the impact of climate change for the rest of society.

But he added that he was “ashamed” as Climate Change Committee chairman to tell the government that UK farmers could not be expected to do what was required if they were then undercut by other countries exporting their goods here.

He added: “The fact the government has only half accepted that is something which really worries me.”

Farm leaders have repeatedly warned that British farmers must not see their livelihoods undermined by food imports produced using environmentally damaging methods that would be illegal in the UK.

It was vital that the government’s new agricultural policy supported British food production, she said.

Earlier this year, the prime minister promised not to sign any trade deal that would be bad for British farmers.

We are still on target for net zero, says NFU

The NFU says its target is still for UK agriculture to be carbon neutral by 2040 – despite a lack of guidance from the government on how to achieve it.

NFU deputy president Stuart Roberts said: “We were really proud when we first came out with our 2040 aspiration to be net zero. It is leading the world when it comes to the agricultural sector.”

It was good to see the government focusing attention on climate change, he added.

“It is probably the biggest issue society is facing, but as far as we are concerned, our aspiration is still what we are targeting.”

Farmers were working hard to achieve net zero by 2040.

But the government needed to step up and be clear about how it expected farmers to do it, including the rules they would have to abide by and how they would be rewarded.