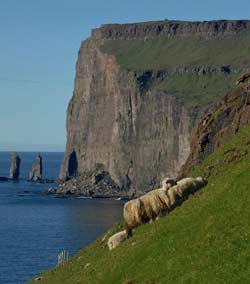 NVZ’s may currently be the bane of many UK farmers lives, but regulation in Denmark means such environmental restrictions have been a reality since the mid 1980’s, according to Erik Jorgensen, Danish Agriculture and Food Council.

“One of the main reasons for strict rules on agriculture is the long coastline in relation to the size of the country. This means there are areas with little exchange of water and any pollution could result in algae blooms and poor physical conditions,” he said.

In the mid 1980’s the decision was taken to reduce nitrogen loading by 50% from agriculture and phosphorous loading by 80%. “This means that requirements for minimum storage capacity were introduced more than 20 years ago,” explained Mr Jorgensen.

The whole of Denmark is designated a Nitrate Vulnerable Zone and farmers are required to produce yearly plans and accounts of manure management, with maximum nitrogen application at 140kg N/ha for pigs and poultry.

“Also with EU regulation stating a maximum of two livestock units/ha, we have been complying with 1.7 units for a long time. This means that, in reality, nitrogen surpluses have been reduced by 56% since 1985 to 2007, phosphorus surpluses by 77% and ammonia loss has reduced by 48%.”

However, co-funding in the 1980’s meant implementation was easier than it is today, with no central funding available in Denmark.

“We have reached the target of where we want to go, further general regulation won’t be cost effective,” said Mr Jorgensen.

Strict environmental legislation is one reason outdoor pig production has declined significantly over the past 10 years. With the number of outdoor sows peaking at 40,000 in the late 1990’s, by 2008 this was down to about 3500 sows, representing just 0.3% of sows in Denmark.

Mr Jorgensen put this down to changes with environmental legislation requiring two lines of fencing around each field and also due to the efficiency offered by indoor pig production.