The farmers are protesting about rising costs and government restrictions put on livestock numbers and fertiliser use in a bid to cut carbon emissions.

Last month, the Dutch cabinet announced plans for a £22bn programme to cut nitrogen emissions by 50% by 2030, to comply with EU regulations on nitrate pollution. In some areas, emissions cuts of 70% or more may be required.

Under the proposals, farmers would have to drastically reduce – by 40% – the amount of nitrous oxide and ammonia emissions their livestock produce, which would force many farms to downsize and some to close (see  panel below).

Thousands of angry Dutch farmers have used their tractors to blockade ports, airports and roads. Straw bales have been torched in streets and manure has been dumped at government buildings.

Meanwhile, videos have emerged of Dutch supermarkets running out of food.

Now, in a show of solidarity, German, Italian, Spanish and Polish farmers have launched protests, in what is fast becoming an EU-wide campaign against “anti-farming” policies.

The farmers fear they could be next and that their governments will seek to impose similar climate policies to comply with EU rules, which they say would threaten their livelihoods and disrupt global food supplies.

On Wednesday 6 July, German farmers joined their fellow Dutch farmers to block roads into the city of Heerenburg, on the Dutch-German border.

In Italy, farmers have held tractor protests on roads in rural areas and have threatened to take their protests to the streets of Rome.

A video posted on social media shows dozens of tractors gathering on a rural road, narrated by one farmer shouting: “We are not slaves, we are farmers! We cannot make ends meet!” 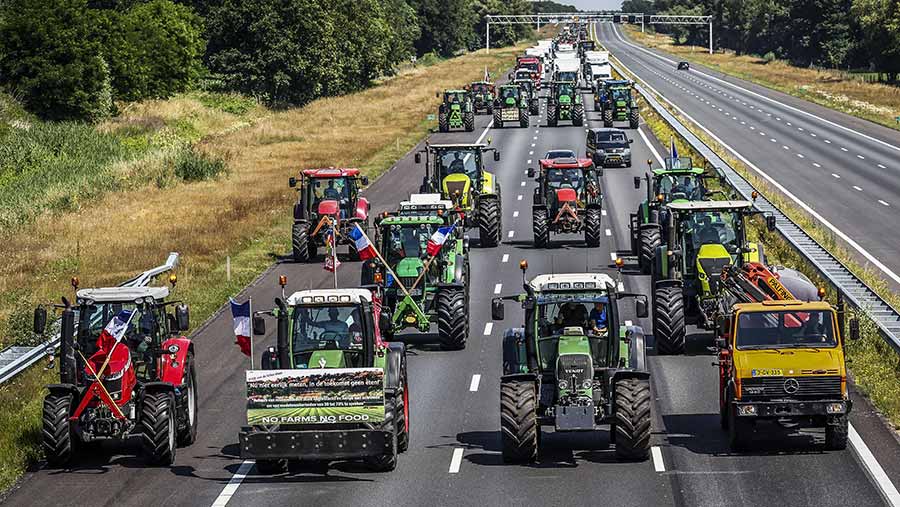 In Poland, thousands of farmers held a protest in Warsaw, carrying anti-government banners and placards. They shouted: “Enough is enough! We won’t let ourselves be robbed!” and “We workers cannot pay for the crisis created by politicians!”

Polish farmers say the rising costs of production, especially fertiliser, are threatening their livelihoods. At the same time, they say their government is allowing cheap food imports.

On 1 July, Spanish farmers blocked the A4 highway in Jaén, Andalusia, to protest against the rising cost of fuel and essential products.

What are the protests about?

The wave of protests that began in the Netherlands was triggered by government proposals to clamp down on emissions of known pollutants from the country’s typically intensive livestock and crop production systems.

These proposals come in response to pressure from the EU Commission and legal challenges by environmental groups, which say the government has not done enough to meet the terms of the 1991 EU Nitrates Directive, designed to protect watercourses from pollution caused by nitrates from agricultural sources.

As such, the government has put forward proposals which would enforce cuts in nitrogen and ammonia emissions of 50% nationwide by 2030.

In some areas close to “nature-sensitive” sites, cuts of 75-95% will be imposed, which would make it hard for any farming – even organic – to continue.

If the legislation clears parliament, regional authorities would then have 12 months to come up with proposals to meet these new targets.

While plans are not yet fully developed, the government has outlined five basic options for the farming sector:

This has left Dutch farmers facing great uncertainty and angry with a government that traditionally has been supportive of their industry and of expansion.

The Dutch farm union LTO estimates that such measures could force 30% of farms out of business by 2030. It argues that the money earmarked for compulsory purchases would be better spent investing in technology, or managing a more gradual scaling down of certain enterprises.

There is currently an impasse between the unions and the government, although the expectation is that the proposals will have to be reconsidered.