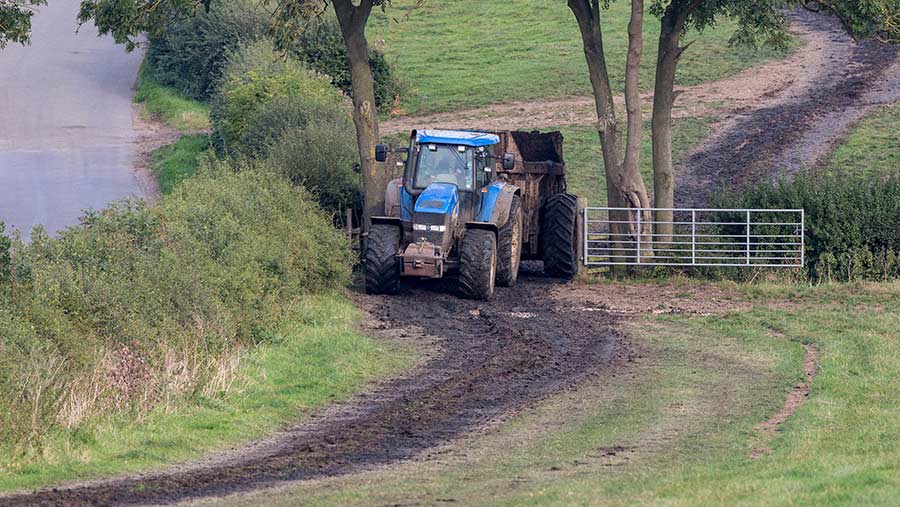 The government is adopting a carrot-and-stick approach to ensure that farmers in England are abiding by water pollution rules.

It follows an Environment Agency (EA) decision to adopt a more proactive approach for enforcing Farming Rules for Water, which have been in place since 2018.

Farmers will face more inspections, but at the same time they will receive additional advice and support to tackle pollution.

EA inspections on farms in England are set to increase following a £1.2m recruitment drive to expand regulatory inspector numbers from 28 to 78.

The new recruits must be “willing to undertake regulatory enforcement action, prosecutions and the serving of notices, when needed”.

The job advert suggests that the inspection officers, who will be paid up to £34,208 a year, may need to have “difficult conversations” with farmers to “influence them to change their practice”.

The EA says the inspectors would work with farmers to increase their levels of compliance with existing environmental regulations.

This would help the farmers “safeguard and improve the environment and ensure they are in a robust position to secure future funding through the Environmental Land Management schemes”.

Extra funding for for CSF programme

Meanwhile, the EA announced on Monday (2 August) that funding for the Catchment Sensitive Farming (CSF) programme to help farmers tackle pollution will be almost doubled over the next three years.

The programme currently covers 40% of England’s farmland, but a joint announcement by the EA, Defra and Natural England (NE) said all farmland would be covered by March 2023.

The NE advisers will also help farmers apply for grants to invest in new equipment and technology, such as precision farming tools that reduce the use of fertilisers and better protect the soil.

The government estimates that its CSF scheme has reduced the number of serious water pollution incidents from manure, fertiliser and soil running off into rivers by almost one-fifth, and helped farmers access £100m in grants.

EA chief executive Sir James Bevan said the additional funding would enable the agency to “continue to engage with farmers to reduce the risk of pollution incidents”.

An NFU spokesman said: “Farmers have made great strides over recent years in reducing key agricultural emissions and much of that progress has been made thanks to incentives such as the Catchment Sensitive Farming project, which helps farmers better understand how to improve the water, soil and air quality on farm.

“The expansion of the catchment sensitive project and extra funding will mean farmers in England can continue to get advice, training and support to make improvements on farm that benefits the farming business and, importantly, the environment.”

An investigation by The Times newspaper in 2020 found the agency had cut farm inspections by two-thirds since 2014-15 and was failing to enforce the Farming Rules for Water.

The investigation found 137 breaches of the rules were recorded since they were introduced in 2018, but none had resulted in prosecutions or fines.

According to the Rivers Trust, cuts to the EA budget over the past 10-15 years had meant an individual farm could expect a visit once every 236 years.

The trust welcomed the announcement of an additional 50 farm inspectors, saying “more boots on the ground” are needed “to protect our waters from pollution”.

Farmers Weekly reported last week that the EA was taking a proactive approach to enforcing the Farming Rules for Water, which include strict limits on the autumn spreading of livestock manures and digestate.

This shift in focus is a source of concern for farmers whose systems rely on the autumn spreading of manure.

Rural land agency GSC Grays said it had received many calls from clients as a result. “We will be monitoring the situation as it develops and will advise and support our clients accordingly,” it said.