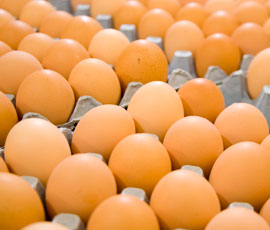 Batches of eggs are to be scanned using ultraviolet light to check that they have not been produced in illegal battery cages, DEFRA has announced.

Farm minister Jim Paice has warned that tough action will be taken to prevent eggs produced in battery cages from being sold in the UK from 1 Jan 2012.

“It is unacceptable that after the ban on battery cages comes into effect, around 50m hens across Europe will still remain in poor conditions,” he said.

“We have all had plenty of time to make these changes, but 13 EU nations have not done so. The UK egg industry alone has spent £400m ensuring hens live in better conditions. It would be unthinkable if countries continuing to house hens in poor conditions were to profit from flouting the law.”

Mr Paice said to overcome the fact that no European agreement had been reached on enforcement, the government had worked with the industry, retailers and the food service sector to come up with a voluntary consensus that companies won’t sell or use battery-farmed eggs.

In addition, the Animal Health and Veterinary Laboratories Agency (AHVLA) will use UV light to identify batches of eggs that are not laid in the new, more welfare friendly cages.

UV light picks up small marks left in the shell immediately after it has been laid, before it hardens. Any eggs which only show a pattern of wire marks will have been laid in the old battery cages, and will not be allowed to be sold as class A (whole) eggs.

The objective is to make it difficult for producers who have not complied with the EU directive to find an outlet in the UK.

“We’re taking action to protect UK consumers and the egg industry by hitting producers who flout the law where it hurts – in their pockets,” said Mr Paice

“I want to congratulate the many major supermarkets and food businesses who have joined with us to stand up for animal welfare by saying they won’t sell or use eggs produced in battery cages, making it far less likely that the British public will be buying them.”

The British Retail Consortium has guaranteed that conventional caged eggs will not be bought by the major retailers or used as ingredients in their own-brand products.

Many food manufacturers and food service companies have also given a similar guarantee for eggs or egg products.