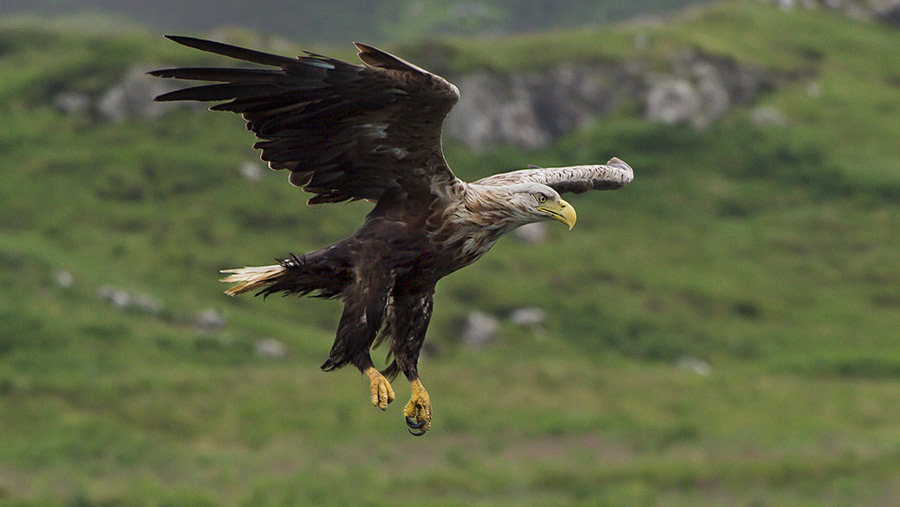 Farmers and crofters in Scotland are being asked to submit evidence about the impact white-tailed sea eagles may be having on their businesses and livelihoods.

NFU Scotland (NFUS) has opened a survey following a review by NatureScot (formerly Scottish Natural Heritage) of the work being carried out under the White-tailed Eagle Action Plan.

Hill sheep farmers and crofters in Scotland are seriously concerned about the growing sea eagle population and the threat of sheep predation to their flocks.

Some hill farmers, especially in the west coast, have reported losing between 20 to 30 lambs a season due to attacks by the birds. NatureScot has admitted that lambs on open hillsides are more vulnerable to sea eagle predation and attacks are mostly being carried out by birds to feed chicks in their nests.

There are currently more than 130 breeding pairs of sea eagles in Scotland, but this number is predicted to rise to as many as 500 by 2040. NatureScot says the birds are an important part of our national heritage and members of the public enjoy seeing them for the wild spectacle they afford.

“We know, for some, serious agricultural damage is occurring,” said Angus MacFadyen, a hill farmer based near Oban and chair of NFUS’ Environment and Land Use Committee.

“Review of the existing action plan presents an opportunity to ensure it is fit for purpose for the next three to five years, and information gathered through our survey will help inform our response to the NatureScot review.”

The survey not only looks at the effects, but asks for views on scheme management, structure and future funding. The deadline for responses is 7 September.

Meanwhile, the deadline is looming for those seeking to apply to NatureScot for the Sea Eagle Management Scheme. It is open to farmers and crofters who are affected by sea eagle predation on their livestock.

Applications for support in 2021 will close on 18 September. For full details, visit nature.scot, email seaeaglescheme@nature.scot or phone 01292 294049.

In England, a conservation project to re-establish a breeding population of white-tailed eagles on the Isle of Wight after two centuries of extinction – supported by NatureScot – is under way.