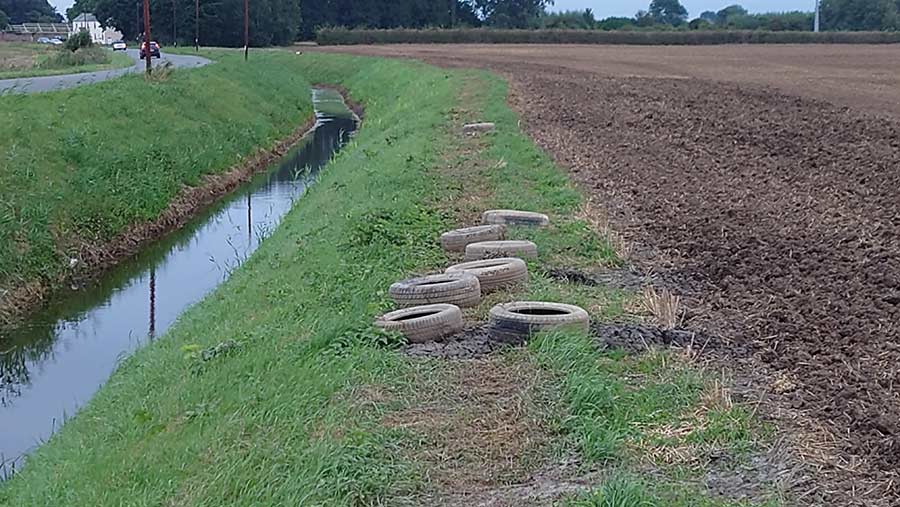 A fed-up Norfolk farmer has tipped a load of tyres outside the headquarters of his drainage authority after a dispute about who should clear the waste that was left on his land when the drain was cleaned.

Arable farmer David Partridge was incensed when he was told by Upwell Internal Drainage Board (IDB) it was his responsibility to dispose of the eight tyres that had been dumped on the edge of his field on Silt Road, near Downham Market.

“They cleaned a drain out alongside my field and alongside the road,” he told Farmers Weekly.

“If they had left the tyres on the side of the road, the council would have cleared them for free. I emailed them [the drainage board] and said can you clear these tyres, but they said no, we leave it to the farmer.”

Mr Partridge, 85, loaded the tyres into the back of his vehicle last week and dropped them outside the Middle Level Commissioners’ offices in March, Cambridgeshire.

“I was a bit frightened they might call the law in, but my attitude was, you have fly-tipped it on my land so I am just putting the fly-tip back on yours,” he said.

Mr Partridge, who owns about 485ha in Norfolk, where he grows sugar beet, oilseed rape, peas and barley, said he has not had any contact with the drainage board since he delivered the tyres on Friday (24 September).

The commissioners provide flood defence and water level management to the Middle Level area, with the internal drainage boards, including Upwell, responsible for the local drainage of their area.

A spokesman for the Middle Level Commissioners’ office said the drainage board would have been working field-side for safety reasons, so the tyres would have been placed on that bank, rather than on the road opposite.

He added: “Fly-tipping is, of course, a major and growing problem.

“It was for this reason that the Upwell IDB rate payers were written to a couple of years ago to advise them that fly-tipped materials placed upon their land was their responsibility, even if placed in their watercourses.

“The board would only be prepared to remove the materials from the watercourse to bankside for flood risk management purposes, and it would not cover the costs associated with taking the material to licensed waste sites, to ensure that costs are controlled.”