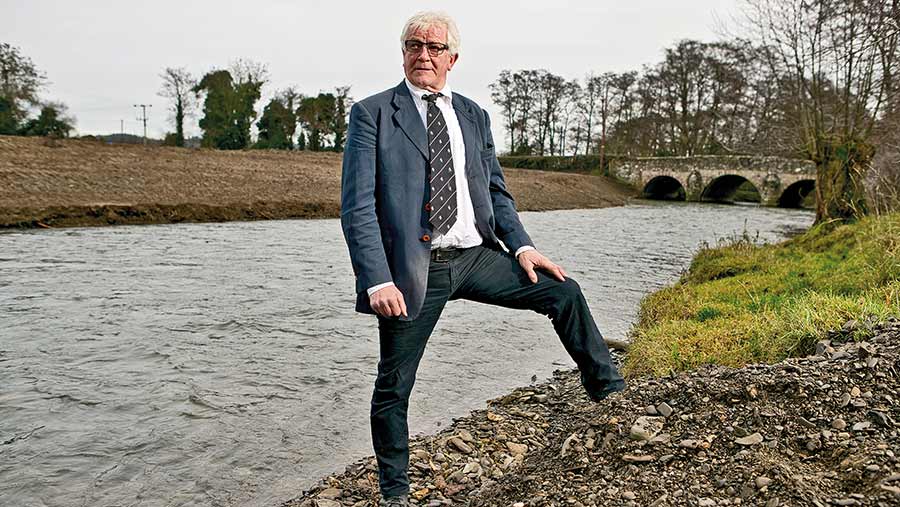 A Herefordshire farmer who used a 16t bulldozer to repair soil erosion along a flood-prone stretch of a protected river has responded to claims that he acted unlawfully.

John Price, a potato, cereal and beef farmer, carried out the erosion work on a mile-long stretch of the River Lugg in Kingsland, near Leominster.

He said he undertook the work, with the support of the parish council, because the Environment Agency (EA) told him he was in breach of his responsibilities as a riparian landowner to prevent further erosion of the river banks.

His actions have been strongly criticised by environmental groups, including Herefordshire Wildlife Trust and Natural England, which have demanded a tough response from the authorities.

But Mr Price told Farmers Weekly: “People might think I have taken the law into my own hands. But I have never done that in my life. I’m acting within the law.”

Mr Price was born at Day House Farm in Kingsland and has lived there all his life. He owns five farms with five miles of river running through them, and said: “No one knows these rivers better than me.”

He said his local EA office rang him in October to request permission to take machinery on to his land to unblock the third arch, known as the “flood arch”, on Lugg Green bridge, because it had been blocked for years. 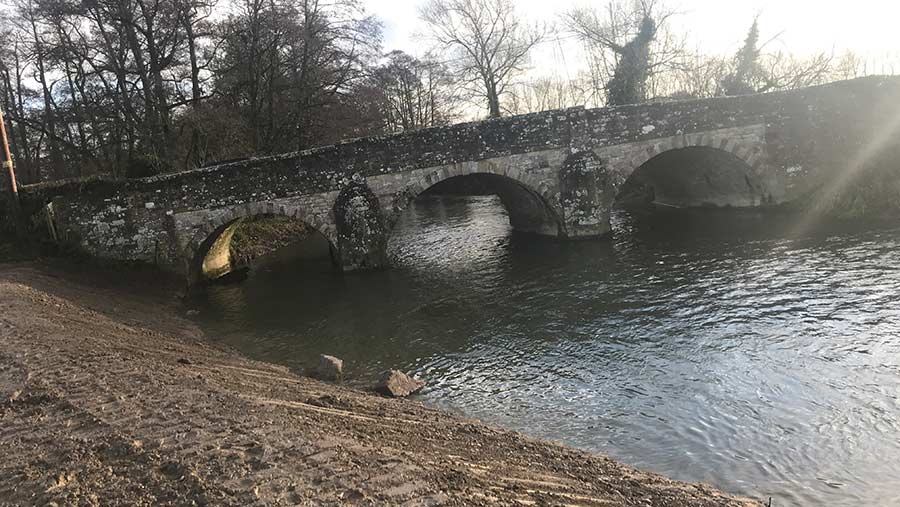 “I said leave it to me because, as you know, we are in breach of erosion [responsibilities] on the same river. I have got the machines to unblock the third arch. They asked me if I would do it for free and I said yes.”

Mr Price hired a bulldozer to work alongside his own 13t 360deg digger to pull the soil up out of the third arch. The soil was then levelled across his field. “We had to move a lot of soil to get the water to move through the third arch upstream,” he explained.

The field is permanent pasture with very few farming inputs. It is grazed by livestock and could not be fenced off due to the bank constantly slumping.

On 10 August, the EA told Mr Price he was in breach of his responsibility as the riparian landowner along the Lugg, because he had not repaired several areas of erosion.

The EA sent him a statement which said in part: “Please take preventative action at these locations to avoid further breaches.”

The agency also sent Mr Price a statement asking him to increase his field margins on both sides of the river from 4m to 10m to prevent crop inputs from entering the river, which he agreed to do to allow wildlife to flourish.

In February this year the Lugg burst its banks during Storm Dennis and flooded half a dozen homes. Local councillors said four cottages were left under 4ft of water and the homeowners were only just getting their lives back together after nine months.

Locals whose homes were flooded have given Mr Price their backing and have thanked him for tackling flooding alleviation works along the river, with the EA’s and parish council’s permission.

Kingsland Parish Council has also sent Mr Price a letter sanctioning his work to clear the third flood arch – and thanking him for clearing Himalayan Balsam, one of the UK’s most invasive weeds which can crowd out native flora.

In May 2019, the Forestry Commission granted Mr Price a licence to fell 250 growing trees at the site under Section 10 of the Forestry Act 1967. The licence expires in May 2024. It includes a small window whereby he can fell trees between 1 November and 1 February each year.

He explained: “The trees are mainly alders and other willows. For good husbandry, they have got to be coppiced approximately every 15 years. We assess this every year and the Forestry Commission advisers sometimes walk the river with us and mark the trees they’re happy for us to cut down.”

Mr Price said he had only cleared up trees that had fallen down, roots and all. Any such trees had been cleared as part of the work to alleviate erosion, as required by the EA. “This problem of falling trees has given me a problem that I am breach of the erosion,” he said.

Mr Price had worked to remedy the erosion for about four weeks, before receiving a phone call from an EA officer on 27 November telling him to stop. “I have been told to stop doing erosion work which the EA says I am in breach of, yet I’m still in breach as I haven’t finished.” 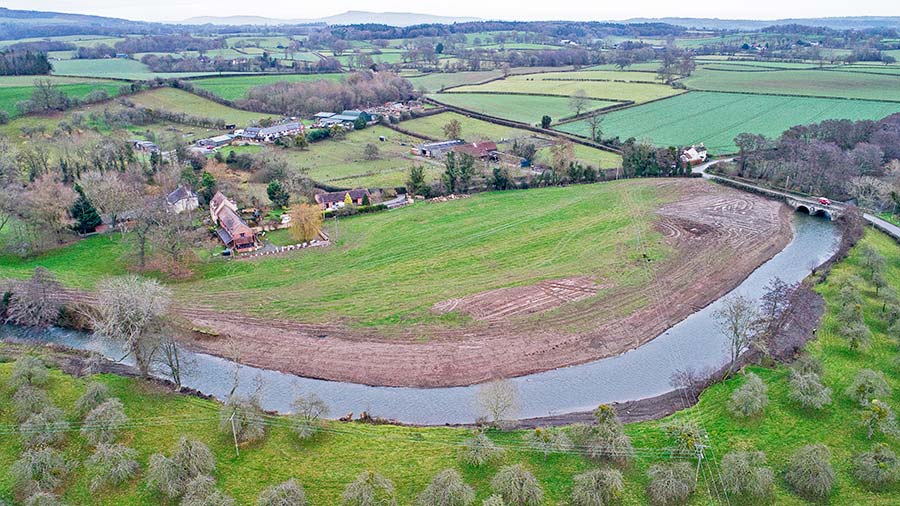 Two legal notices, requiring the work to stop immediately, were served on him last week by the EA and Natural England. Mr Price said it was not clear why he was being told to stop the work.

Then, at about 10.30am on Friday 4 December, officers from the EA, Natural England and the Forestry Commission, supported by West Mercia Police, mounted a joint investigation at the site.

“It was like a dawn raid,” Mr Price said. “There were about 20 cars parked in the Coronation Hall about half a mile from the bridge. I was on a JCB and I could see over the hedge. The cars later moved and parked on the bridge and all the public were stopping in their cars and asking the police what was going on. There was no social distancing, no masks over Covid-19.”

Mr Price approached the officers and told them they could have parked at his farm. “I told them they were wasting their time as I have got all the necessary licences. I have got permission to do the erosion work, because the EA says I’m in breach.

“I have got the tree felling licences and they have asked me to do the bridge work, which I’ve done. I said: ‘Instead of wasting my money trying to prosecute me, I’d rather put it in the local church.’”

Sebastian Bowen, chairman of Herefordshire Council, said: “John is a very meticulous worker. He did this at his own expense to try and get things right and in compliance with the law.

“The parish council has been asking the Environment Agency for years to do something about the flooding at Lugg Green bridge. The agency finally took action by coming to see us at the end of September.

“Their response was to ask the local farmer to alleviate the problem by carrying out the work under the bridge and on the upstream bank to ensure the water was directed through the third arch to relieve pressure on the other two arches. The locals are delighted that someone has finally made an effort to try and stop the flooding.”

The EA confirmed it had launched an investigation and was taking the matter “very seriously”. The agency said it had held discussions with Kingsland Parish Council and local landowners about flooding and pollution, and had offered advice and guidance.

But it said the works undertaken would require a permit under the Environmental Permitting Regulations and no such permit had been issued.

Farmers Weekly asked the EA to comment on Mr Price’s assertion that he was given permission during a telephone call to unblock the third arch of Lugg Green bridge during his work to prevent further riverbank erosion. A spokesman said: “As this is a live investigation, we are unable to comment any further.”

Kingsland Parish Council said it supported work to improve the Lugg, provided that it was “undertaken at the direction and instigation of the Environment Agency and is in line with the appropriate guidelines, regulations and processes that may be applicable”

Landowners must find out which permissions and licences they need to maintain, repair, build or remove anything in or around a watercourse. This includes:

Landowners are responsible for getting the permissions and licences they need. They may be fined or imprisoned if they fail to do this.