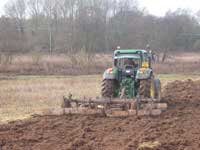 One in four farmers have joined a campaign aimed at staving off a compulsory set-aside replacement in England.

The DEFRA survey of land managed under the Campaign for the Farmed Environment shows that 82% of farmers have heard of the initiative.

Some 25% of farmers have already taken action in direct response to the campaign. Of these, 81% intend to also take further action.

Of the remaining 75% who have not yet taken any action, half said they intended to take action in the future.

The survey findings suggest that the campaign aimed at encouraging farmers to implement voluntary environment measures has got off to a good start.

But there is still some way to go before it can be deemed successful.

The campaign was launched last autumn after the government postponed plans to introduce a compulsory set-aside replacement.

Instead, farmers have been asked to manage more land for environmental purposes on a voluntary basis.

A compulsory set-aside replacement could still be introduced unless more farmers sign up to entry-level stewardship.

Farmers have also been asked to keep land out of production voluntarily unless it is already being farmed.

Some 49% of farmers said they left cultivable land out of production during the 2009/10 crop year, in addition to land under agri-environment schemes.

The full survey results can be seen here.