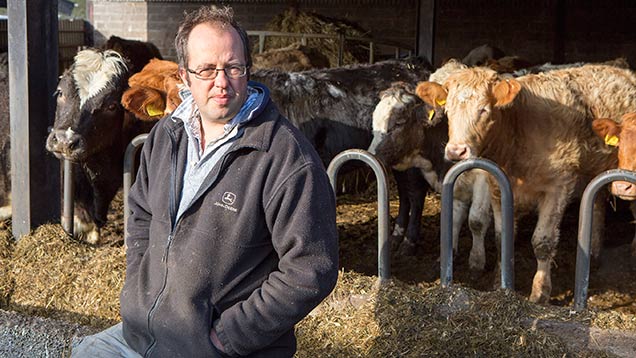 The farmer forced to evacuate his family and cattle at the height of the Somerset floods says his young children still fear they will have to leave their home again.

James Winslade, who farms at West Yeo Farm, Moorland, evacuated his family and more than 500 cattle amid rapidly rising water in February. He and his wife Jenny spent most of 2014 living in a mobile home with their three children before finally moving back into the farmhouse this autumn.

“Our twins Jack and Harry are almost five,” Mr Winslade told Farmers Weekly. “Each night, Jack asks whether we can stay another night. Last night, he asked whether we are going to flood again. It’s had an effect on them – they see the rain and it worries them.”

Mr Winslade’s elderly parents were also evacuated. “The floods have had a big effect on my parents. They’ve only recently got back into their house. My father is 90 and he doesn’t understand why the house is the same but everything inside is changed.”

Some houses in the village remain unoccupied, with 96 families until recently still waiting to return to their homes 10 months after they were abandoned to rising water. Skips of discarded belongings remain in driveways and some families are living in mobile homes.

“There’s a huge amount of building work to be done, says Mr Winslade. “I know at least two people who won’t be back in their homes until mid-summer 2015. It’s a long time. Other people have lost confidence and they are talking about selling up, which they shouldn’t need to.

The Winslades are determined to stay. “We are third-generation farmers here and until last year we had never flooded. But the moors have always flooded and they always will flood – but only to a few inches and then the water is pumped off. We accept that but not to the level last year.”

Mr Winslade is continuing to restock his own farm with store cattle from Exmoor following the floods. But it’s an expensive business. Despite pressure on beef prices, 260kg heifer calves have been costing as much as £700-£800 per head, with similar steers around £800-£900.

Much of the land is well on the way to recovery. Although some fields languished under water up to 2m deep for more than three months, it was still possible to get a crop in the ground once the floods subsided later in the spring.

“We’ve been blessed really with a good growing year,” says Mr Winslade. “We put in the grass seed in April and May and also drilled some maize and spring corn – we had a little bit of moisture for it to get up and go and the latter part of the summer was really nice.”

First-cut silage came off the field in August – with a further two cuts afterwards. But spring barley fared less well, yielding about 3t/ha. Maize land benefited from being subsoiled before it was drilled and yielded almost 45t/ha.

“With that amount of water sitting on the land, we were dealing with soil compaction issues all summer,” says Mr Winslade. “Some of our grass suffered and we had to redrill this autumn, but it is looking really well now.”

Winter wheat land submerged for three or four days yielded 10t/ha. But fields under water for almost two weeks yielded 7.5t/ha. “That is on land away from the main farm. All the winter wheat we drilled at home perished, but we’ve got enough feed to see us through the winter.”

Local livestock producers rallied round – and so did the wider farming community. Three days after the first cattle were evacuated, the first lorry loads of emergency animal feed arrived as Forage Aid captured the imagination of farmers across the country.

In total, 1,400 cattle, 1,600 sheep and 120 horses were evacuated from flood-hit farms. “Farmers offered whatever they could spare – it was an incredible thing to know that we were moving cattle out and places and feed were being found for them.”

“We got the cattle back on the farm in April and we’ve been repairing everything here ever since,” adds Mr Winslade. “But it was the kindness and generosity of everyone that kept us going – it helped us see the light at the end of the tunnel.”

Expansion plans are on hold for the calf-rearing business run by James Hall and his partner Becky Riley at Northmoor, near Fordgate. But the couple are determined that the delay is only a temporary setback as they rebuild their enterprise in the wake of the floods.

“We want to take out a loan so we can put up two more sheds,” says Mr Hall. “But the floods meant we had to restart the business, so our books won’t look right for another couple of years. The water knocked us back and it will take a while to recover and convince the bank to lend us money.”

As first-time farmers, the couple rear calves for Blade Farming. Calves are delivered to the farm in batches of 120 and leave as stores at seven months old. The farm should have reared 800 calves this year but the floods meant sheds and fields lay empty for weeks.

“Blade is growing and we want to grow with them,” says Mr Hall. “It’s a good business and I can’t say a bad word about them. They’ve been really supportive and even offered to find us alternative accommodation when we were flooded out.”

Grass fields have bounced back well. But creeping buttercup has become a major problem on some SSSI land. “It’s no good for cattle and no good for wildlife either so we are going to apply for special permission to knock back the buttercup with a selective spray.”

This summer, Mr Hall rented an extra 22ha from a nearby farmer so he had enough grass once the floods subsided. “We had a good growing year, and managed to make more forage than we needed, which will carry us into next year. It pulled us out of the mire.”

That said, the couple have lost a lot of money. But they remain upbeat about the future. “As you know with farming, when you lose money it is difficult to get it back,” says Mr Hall. “But the farming charities really helped us out and kept our heads above water.

“We evacuated the farm on 8 February and didn’t get our next pay check until July. We had no money coming in for five months. So we’ve taken a big knock but we are still fighting and determined to push the business forward.”

Farmers and local residents are calling for reassurances that dredging two rivers to prevent a repeat of the floods that devastated homes and businesses will be maintained.

“They have dredged 8km of the Parrett and Tone, which is great,” said Rebecca Horsington (pictured), who chairs the Flooding on the Levels Action Group (Flag). “The land is in recovery – there are parts that are still not completely recovered, but it is certainly looking a lot better than it did.

“The major concern locally is that we haven’t got any concrete assurances of funding to maintain the dredge. That to us is critical. It is all very well doing the dredge once, but if you don’t maintain it there is a real worry that we will be back in the same position in five years time.”

Earlier this year, the government promised to help establish a Somerset Rivers Board so local people could take more responsibility for water management on the Levels. But Ms Horsington said the board was not yet up and running.

The promised creation of the rivers board had become a political football, Ms Horsington told Farmers Weekly. “They keep politicising about it, rather than just guaranteeing that it will be set up and the money for maintenance is there.”

Although river levels had risen and were reported to be “concerningly high” during the autumn, Ms Horsington said they were normal for the time of year. “If you lived here, you wouldn’t be that concerned about it, but not having these assurances is adding to local anxiety.”

She added: “There’s a real feeling that without these assurances – for the maintenance and for the rivers authority – they are putting their homes and lives back together but what is the point? It could all happen again if it isn’t taken seriously. A quick fix isn’t going to do it.”