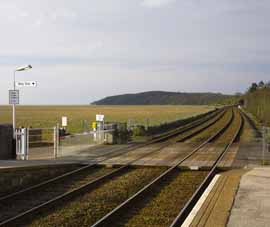 Farmers will help light dozens of beacons in protest against a high-speed rail link between London and Birmingham.

A public consultation into the government’s proposed HS2 route was launched on Monday (28 February). Local campaign groups, farmers and other people opposed to HS2 have chosen the same evening to light beacons in protest against the project. Some 30 beacons will be lit, from Buckinghamshire to Oxfordshire, Northamptonshire, Warwickshire and Staffordshire.

But the plan has angered farmers and conservationists, who claim it would split farms in two and carve up the countryside for little benefit.

Transport Secretary Philip Hammond said Britain’s transport network should not be left behind while other countries improved their rail infrastructure.

“High-speed rail offers us a once-in-a-generation opportunity to transform the way we travel in the 21st century and would help us build a modern economy fit for the future.”

Countries across Europe and Asia were already pressing ahead with ambitious plans for high-speed rail, said Mr Hammond.

“Some of our key rail arteries are getting ever closer to capacity,” he said. “We cannot afford to be left behind.”

The NFU and the Country Land and Business Association have both been lobbying for adequate compensation for farmers affected by the route.

An exceptional hardship scheme for affected house-owners has since been widened to include owner-occupiers of agricultural units.

The Stop HS2 group said the rail link would cause irreversible damage to the countryside and cost about £1250 for every household across Britain.

The consultation runs until 29 July. Construction of any new network would be expected to begin early in the next parliament, with the line to the West Midlands completed by 2026.

Further legs to Manchester and Leeds would be finished in 2032/33.