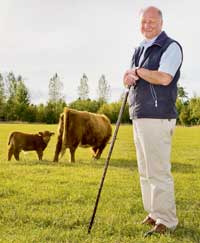 Compulsory measures will be considered unless more farmers increase the amount of land under environment management, the government has warned.

The campaign, which covers England only, was set up by the industry 15 months ago as a voluntary alternative to a compulsory set-aside replacement.

It aims to increase the amount of English farmland in voluntary environmental management by 30,000ha (74,000 acres).

Farmers are being urged to make sure 70% of land is in an agri-environment scheme and double the number of in-field environmental stewardship options.

They are also being encouraged to retain 179,000ha (442,000 acres) of uncroppped land currently out of production.

Mr Paice said the campaign had done much to raise farmers’ awareness of the environmental benefits that their land can deliver. But the government would consider a compulsory approach, unless the faming community delivered better results.

In an open letter to farmers, Mr Paice said he was grateful to those people who had worked to strengthen the campaign. But there was still some way to go.

“Farmers cannot afford to relax,” said Mr Paice. “The government is putting food production back up the agenda, but we have made it clear that this must be done alongside protecting and enhancing the environment, and farmers must show they can do both.

“We want the campaign to be a success and don’t believe that we should regulate and impose more red tape if the farming community can achieve the same results through its own actions.”

The campaign was the farming industry’s chance to demonstrate that a voluntary approach could work better than regulation, Mr Paice said.

But he added: “If the farming community cannot step up and achieve these results voluntarily, the government will have to consider a compulsory approach.”

The warning comes less than a month after NFU president Peter Kendall called on farmers to take the campaign more seriously or face a raft of legislation. “This threat is real,” said Mr Kendall.

A large proportion of farmers and advisors were aware of the campaign, but too many believed they didn’t need to contribute, he added.

An annual survey of land managed under the campaign will be launched next Monday (14 February).

Some 5,500 farmers and land managers will be asked about the voluntary measures they have put in place to support the campaign.