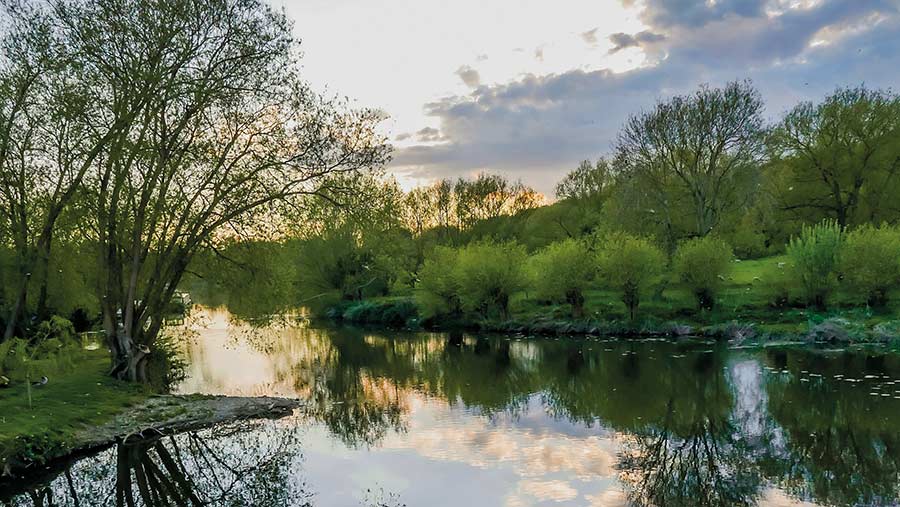 With input costs rising exponentially and production margins squeezed, farmers are showing increasing interest in the opportunities that might arise from trading their natural capital.

It is, therefore, little surprise to see farmers who are already involved in nature recovery and environmental enhancement flocking to a new initiative, designed to explore and develop these fast-emerging markets.

The Environmental Farmers Group (EFG) has so far attracted 82 farmers in the River Avon catchment – the largest chalk stream catchment in the country.

It is drawn from seven existing “farmer clusters”, set up in partnership with the Game and Wildlife Conservation Trust (GWCT).

The project has three broad aims:

How can you measure natural capital?

To trade in environmental net gain – be it increased biodiversity, water quality improvement or carbon offsetting – it is first necessary to measure it; to quantify the “credit”.

For example, when a farmer plants a hedge, creates a pond or sets up a field margin, the NE metric converts that into a number of biodiversity credits, which someone such as a housebuilder may then purchase.

When it comes to nitrate and phosphate levels in water, measuring and delivering improvements is generally a matter for negotiation with water companies and local authorities.

However, metrics do exist to measure likely water quality improvements from certain land use changes, which farmers are paid for.

As for carbon, there are at present two carbon codes – for woodland and peatlands – which take carbon sequestration estimates and convert them into carbon credits.

The Game and Wildlife Conservation Trust is looking to introduce further codes for hedgerows and for arable land reverted to grassland.

While continuing food production remains part of their ethos, the opportunity to trade some of their net gains to businesses or organisations that need to offset their own environmental damage has also grabbed their attention.

To find out more, Farmers Weekly spent an afternoon with two of the key people driving the initiative – EFG chairman and farmer Rob Shepherd and GWCT chief executive Teresa Dent.

Why have you embarked on this project and what is in it for farmers?

RS: Everyone has heard about carbon offsetting, about biodiversity net gain and about nutrient reduction – indeed, our cluster members are already doing these things – and the opportunity is there to trade them.

But farmers and landowners are worried about two things – missing the bus and overcommitting.

The EFG will watch out for that bus, and when deals arrive, our members can dip their toes in the water without the fear of betting their whole farm and then living to regret it.

TD:  All of the farmer clusters are already doing great work in hitting their environmental targets.

But as we move forward into Defra’s “blended finance” model of delivering public goods (with both public and private money for natural capital), amalgamating the clusters into a single body gives us scale and resource to deliver even better outcomes.

How will it work in practice?

RS: Farmers who wish to participate pay an annual fee of £1.25/ha, which generates enough money to run the co-operative.

It will offer organisations looking for large-scale environmental trades the advantage of dealing with one body, rather than lots of individual farms, as well as access to recognised scientific monitoring, supported by the GWCT.

As a co-operative, the value of any trades will be put into one pot and shared among all participating members, so spreading their risk across many trades.

Through our equalisation model, everyone will get something, though those who do more will get more.

As with most co-ops, however, they will have to commit to do their natural capital trading within the group.

Who are the likely customers and how close are you to doing any trades?

RS: Water companies and housing developers, which need to deliver a 10% biodiversity net gain on their activities, are showing the greatest interest so far.

Those markets are the most developed, more so than carbon.

Biodiversity gain is already a thing, with Natural England having developed a metric to measure it (see “How can you measure natural capital?”).

The science for measuring nitrates and phosphates in water is also well established, though measuring carbon sequestration is yet to be standardised.

We’ve not done any trades yet, but we have three in the pipeline – all nutrient reduction deals.

What sort of things do the clusters do already and how will this develop?

For the EFG, we’re developing a “whole-catchment” conservation plan. This will involve a lot of water quality improvement work, but also connectivity of habitats between different clusters.

It’s farmer-led, and some are also now interested in disease mitigation – such as reinstating elm trees or countering ash dieback – while others are targeting species recovery, such as lapwings in the south of the catchment.

Our conservation plan will pull all this together, and the GWCT will also apply the science to the trades, monitoring them to ensure they deliver.

If your members are already doing this, aren’t they starting from a high base, with less scope for further gains?

RS: Possibly, so we’re looking to establish a baseline for the whole EFG against which improvements can be measured, so those who have already done a lot are not penalised.

Ideally, I’d like this to be a UK-wide baseline. For now, the GWCT is able to assess the baseline biodiversity on 1sq km plots on each member’s farm, so we can show them how much headroom they have for further improvement.

When it comes to carbon sequestration, won’t some members be tempted by blanket tree planting?

RS: Some landowners may be interested in this. But I believe many farmers and land managers still want their farms to be agricultural, and there are better ways of capturing carbon than just planting trees.

Better soil management is one way, and hedgerows that are wider and taller can combine excellent carbon sequestration with greater biodiversity.

In these difficult times, shouldn’t farmers be more concerned with food production?

RS: We believe that to continue producing food, you must have a healthy environment. There is no issue with having high levels of conservation and strong food production.

We are learning more and more about the relative fertility within a field using soil analysis and field mapping. With GPS we can then grow on the areas with the greatest yield potential, but leave the margins or less productive corners for wildlife.

TD: If individual farmers want to go into ELM, that’s fine. They are well placed to join the Sustainable Farming Incentive anyway.

And their farmer clusters should help them gain better access to the Local Nature Recovery tier, while the EFG could be the key for participating in Landscape Recovery.

Situated alongside the River Allen – a tributary of the River Avon near the Hampshire-Dorset border – South Allenford Farm has been part of the Allenford farmer cluster since its inception in 2013.

The 800ha unit is run by Rob Shepherd under a partnership arrangement with the landowner.

He has a mix of enterprises, including suckler cows and sheep kept on both permanent pasture and herbal leys, and an arable rotation that includes wheat, barley, oilseed rape, peas and herbage seed. 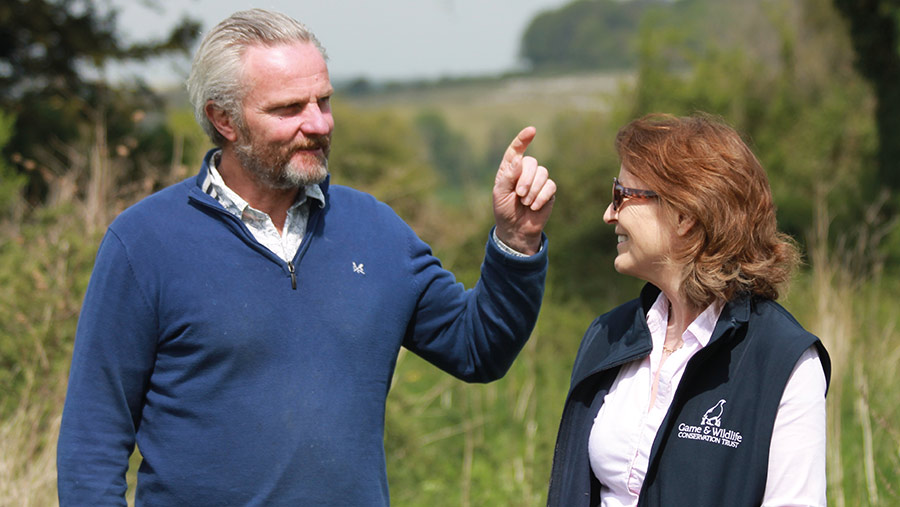 This is mostly achieved by restoring, enhancing and creating habitats across the farm, with extensive hedgerow planting and field management.

“The farm is next to a nature reserve, so the aim has been to attract species from there to populate our farm as well,” says Mr Shepherd.

Actions include leaving 6m margins around some fields and, in some cases, another 6m of cereal crops are left unharvested to provide extra food for wildlife.

Encouraging turtle doves is a particular passion, and a pond has recently been created to attract them, designed so they can walk down to the water’s edge.

There are currently a number of  breeding pairs on South Allenford Farm, and an estimated 14-18 pairs of turtle doves across three adjoining clusters. 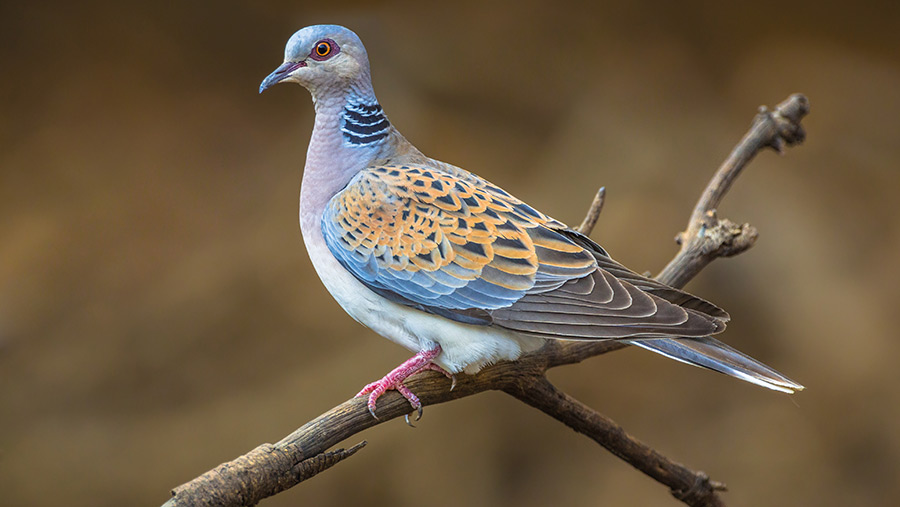 “We also have stone curlews [on an adjoining cluster], corn buntings, several pairs of breeding English partridges, and seven coveys of grey partridge on this farm alone,” says Mr Shepherd.

“There is a lot of goodwill and altruism towards nature among farmers which is not recognised by government or the public. We’re trying to correct that misconception.”