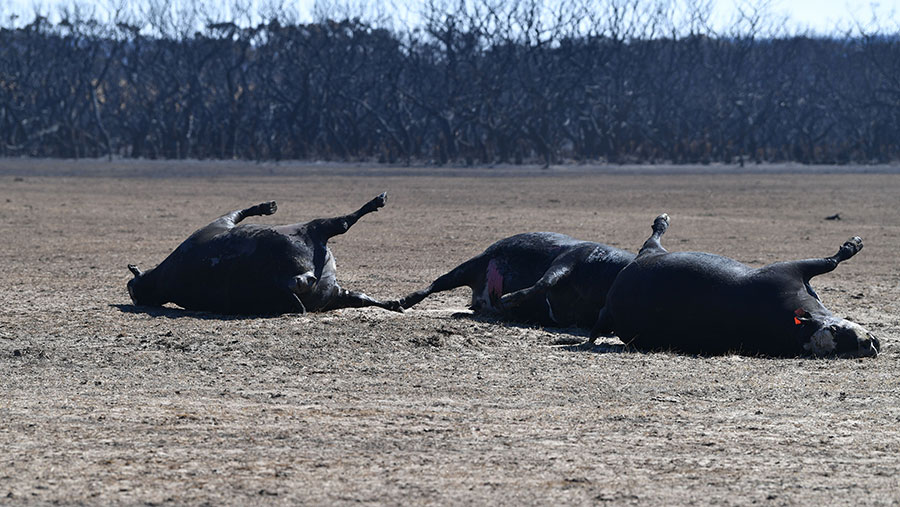 Livestock losses from the Australian bushfires will exceed 100,000, according to the federal government’s agriculture minister.

Tens of thousands of cattle and sheep have been killed in the bushfires, either during the fires or due to heat stress and smoke inhalation. Many farmers have lost their entire crops or herds.

Are you looking for ways to help fire-affected farmers? The most useful way to help is with a monetary donation, however donations of fodder, food, water and household goods are also being accepted ?Visit FarmHub to find out more – https://t.co/QtmGhNLxyE pic.twitter.com/I1B8NMBEQx

Australia’s agriculture minister, Bridget McKenzie, confirmed that army reservists are being called in to dig mass graves for the dead stock “as a priority” to avoid any potential biosecurity hazard.

Senator McKenzie has offered to put an additional 100 vets on the ground in bushfire-affected states to help euthanise thousands of injured stock.

The fires have wiped out huge swathes of land, feed and infrastructure. Farmers have been forced to shoot their stock to avoid them dying from starvation.

Livestock farmer Steve Shipton shared harrowing images after being forced to shoot 20 cows that were badly burned after a bushfire tore through his farm on 31 December in Coolagolite, New South Wales.

The Facebook page “Support Australian Farmers In Crisis” has published a number of distressing images of dead stock alongside the message:

“My fellow farmers have been absolutely stripped of everything. After rain brought firefighters some reprieve earlier in the week, temperatures are expected to soar again to 38C on Thursday and Friday (9-10 January), raising fears that huge fires in Victoria and New South Wales could join and create ‘mega blazes’.”

The federal government has announced at least A$2bn (£1.05bn) over two years for bushfire recovery. Australian prime minister Scott Morrison pledged to commit “everything that is needed and more” for the recovery effort.

British farmers have been offering their messages of support and sympathy to Australian farmers.

Our thoughts go out to all farmers, communities and animals caught in these terrible Australian bush fires pic.twitter.com/FBRKuIdBzQ

Lincolnshire arable farmer Andrew Ward, chairman of Forage Aid, said on his Twitter account (@wheat_daddy): “This is a catastrophe and deeply distressing to see how our friends down under are suffering. This will have life changing consequences. People of Australia, you are in our thoughts and prayers.”