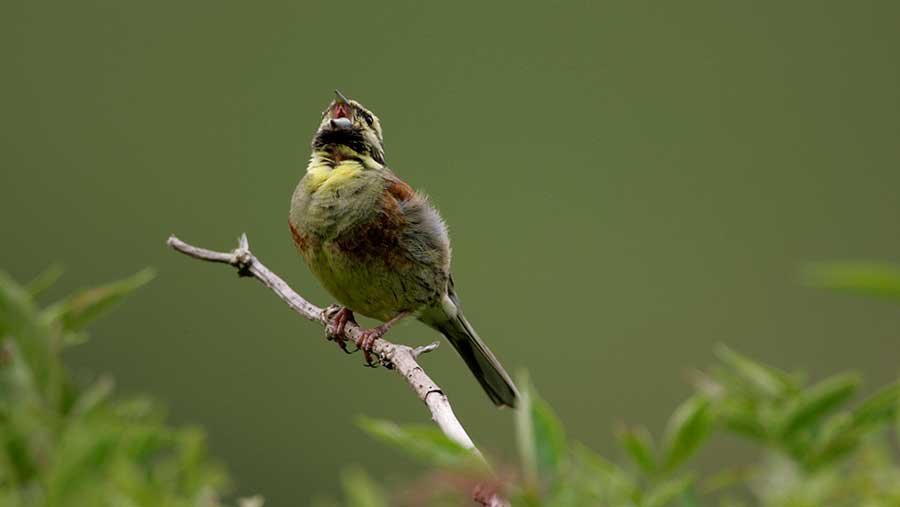 Farmers in the South West have helped to save a rare farmland bird in a 25-year collaboration with the RSPB.

Farmers and the RSPB don’t always see eye to eye, but by working together they have increased the population of an extraordinary little bird – the cirl bunting – by more than 900%.

Over the past quarter of a century, farmers in south-west England have been encouraged to grow spring barley, leave stubbles over winter and delay cutting hedgerows, as part of a targeted cirl bunting option in the government’s agri-environment schemes.

“This project has shown what can be achieved when working together; it is the only project that has species recovery linked to agri-environment schemes,” says Mrs Jeffs.

The birds were first recorded in Kingsbridge, south Devon, in the early 1800s and became common across southern England and Wales.

In the second half of the 20th century, as farming practices evolved because of changing government pressures, the birds’ habitat shrank and the population retreated to the south coast of Devon between Plymouth and Exeter.

As sedentary birds, cirl buntings do not travel further than 2km from their nests, so to thrive they need both arable and grassland in close proximity, meaning that mixed farms create the ideal habitat.

In answer to this, the RSPB has been working with a number of farmers to provide suitable habitats. The cirl bunting was the first farmland bird that the RSPB started working on, which aided the introduction of the first arable option in an agri-environment scheme.

The RSPB has provided support for farmers through CS, ELS and HLS, says Mrs Jeffs. “Farmers are really interested and people are often surprised at that.”

In many cases, the RSPB has drawn up scheme applications for farmers, and has been on hand to offer advice and support.

“It is about facilitation; helping to access grants by making sure the bureaucracy is not off-putting, particularly because it is so complicated now,” says Mrs Jeffs.

“The most important thing is that we have happy farmers. It is good for the RSPB to have advisers on the ground to understand what farmers face and why they do things.”

As the UK prepares to leave the European Union, pressures are mounting for future farm support to become more closely linked to environmental delivery – and the RSPB believes that the model established with the cirl bunting project is a good example of how this can work in practice.

“The reason the project has been so successful is because of the financial support,” says Mrs Jeffs. “We need support to carry on, as so much time and effort has been invested in agri-environment schemes, and they are not the easy option.”

As well as the financial aspect, any future schemes must be relatively straightforward to deliver. One of the issues with the latest agri-environment schemes is that they are much more difficult for farmers to get accepted into.

“I have worked with farmers for 20 years and these have been lovely relationships; the challenge is to make sure this continues,” says Mrs Jeffs.

‘We leave stubbles until the spring, so the birds have a ready food source’

Peter French, a fourth-generation farmer, has been involved with the cirl bunting project since it began, back in the early 1990s.

His father, David French, originally signed up to the project, and Peter has since taken over the reins. Operating a 283ha mixed farm, Mr French has been able to align the project with his current system, focusing particularly on some rented land along the Labrador Bay coastline.

The 25ha area of cliff land is now a nature reserve and has at least 23 breeding pairs of cirl buntings nesting on it. 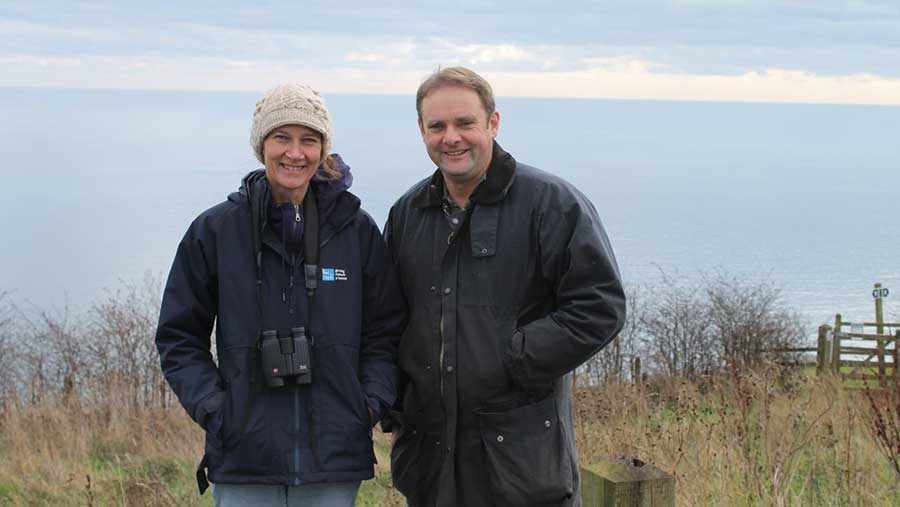 Mr French has designed a network of stubbles across the farm, supported by the agri-environment schemes. He has also created 6m margins around most of his land and grows spring barley, some of which he leaves as overwintered stubble until 1 April.

To other areas he does not apply any agricultural chemicals or fertiliser, uses a reduced seed rate or keeps it as a sacrificial crop.

As the RSPB undertakes some management, it keeps 20% of the HLS payments, with Mr French retaining the rest, plus all of the ELS and BPS payments.

“There was a lot of advice from the RSPB to help us understand why certain features were required, as well as liaising with Natural England and the RPA to make sure they were still satisfied,” says Mr French.

“The RSPB’s knowledge of the rules and its understanding of the farmer perspective has really bridged the gap.”

As the cirl buntings have an extended breeding season, Mr French leaves some hedgerows to grow to provide safe nesting areas.

“It is not about asking farmers to stop farming or not grow crops, but more about managing timings and leaving stubbles until the spring, so the birds have a ready food source,” says Mrs Jeffs.

Mr French has also allowed some scrub to develop on the cliff land as it helps create the micro-climate necessary for invertebrates to thrive and for the birds to nest.

However, allowing scrub to grow penalises his BPS area, even though he is encouraged to provide the cover by Natural England.

Although the first year of the scheme was more difficult, it became easier once Mr French established the annual routine.

“Changes have not been major, just focusing on careful management and making sure there are two or three fields close to nesting areas with spring barley in.”

In the summer, cattle are kept on the grass fields, which are grazed by sheep in the winter. This is important to get the structure of the grassland right, says Mrs Jeffs.

“This keeps the grass shorter for the birds to be able to forage and creates bare patches of earth for grasshoppers to lay eggs in.”

Though the project has been a resounding success, Mr French emphasises that it had the right people working on it. It has also only been viable due to the agri-environment payments.

“The biggest threat to the future is funding. We need Natural England advisers who understand the target and what fits well on farm.”

‘You can still farm effectively and turn a profit, while aiding the environment’

Jonathan Andrews got involved with the cirl bunting project in 2000 as part of the Countryside Stewardship (CS) scheme.

A fourth-generation farmer, Mr Andrews is a keen conservationist and has enjoyed reversing the decline of the cirl bunting. “You can still farm effectively and turn a profit, while aiding the environment,” he says.

Farming alongside his wife Alison, Mr Andrews was approached by the RSPB as he already had cirl buntings nesting on his land.

On joining the CS, he had to change his predominantly winter cropping to spring cropping, put in 6m margins and grow a wild bird seed mixture. 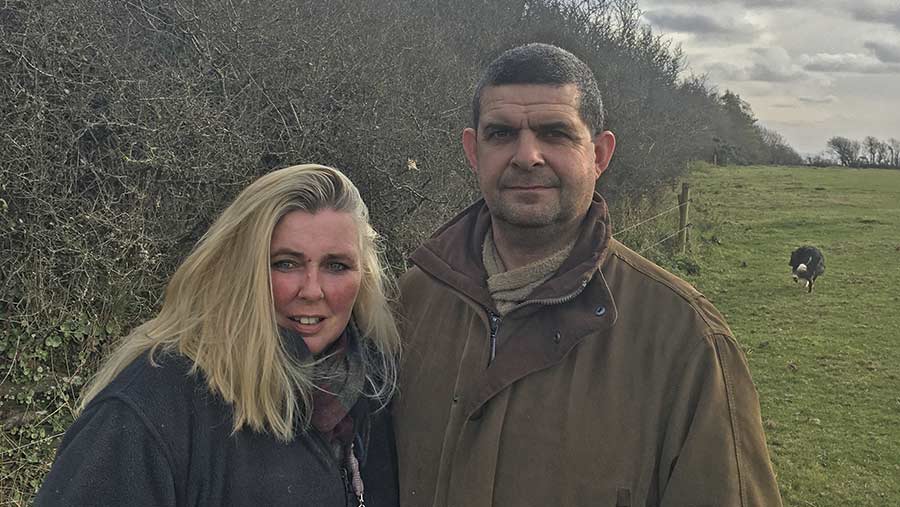 “It meant a slight yield reduction but the CS payments – of £173/ha – compensated,” he says. He now grows spring malting barley to achieve a premium price when he can, and has seen significant yield improvements since he began.

The CS scheme ended in 2010 and Mr Andrews joined HLS in 2011, but continued to farm sensitively in the intervening year.

“I had a personal interest to maintain and improve the biodiversity on the farm,” he says. “I am still actively farming, but have embraced the conservation side of things too.”

Mr Andrews found the RSPB’s support in the whole process to be a real help. “They were very good during the first application for CS; making sure things got going on the ground. They can also be good mediators between the RPA, Defra and farmers,” he adds.

Greater focus on agri-environment schemes is something Mr Andrews feels should be adopted in any post-Brexit farming policy, with funding focused on conservation to help with public support.

However, policies could be less complicated: “We have to have checks, but the bureaucracy and feeling of being watched does put people off.”