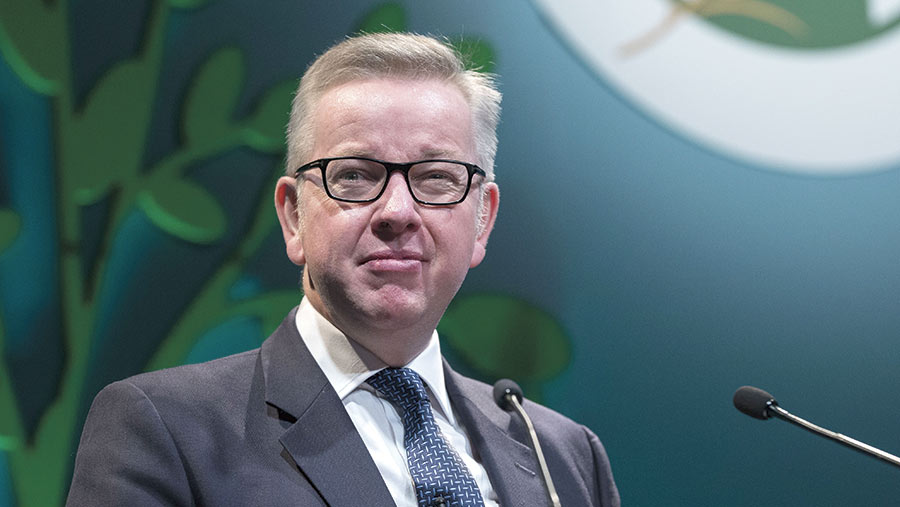 The new Agriculture Bill setting out the policy framework for supporting UK agriculture post Brexit is due to be published next month and is unlikely to include any plan to cap payments to larger farmers.

The surprise announcement was made by Defra secretary Michael Gove, giving evidence to the cross-party Environment, Food and Rural Affairs (Efra) committee in Westminster on Wednesday (13 June).

It had previously been suggested the bill would not see the light of day until the autumn, leaving little time for proper scrutiny before the UK leaves the European Union in March 2019

But Mr Gove told the Efra committee the aim was now to publish the bill “before the summer recess” and civil servants were scrutinising the 44,000 responses to the Health and Harmony consultation to decide what it should contain.

Capping to be lifted

Asked by committee chairman Neil Parish whether these responses were having any effect, Mr Gove revealed he was already reconsidering capping as a result.

“Right at the very beginning, I’d argued that one of the inherent unfairnesses in the BPS system was that it allocated money on the basis of size of agricultural holding to people who were already very wealthy,” he said. “I thought the right thing to do was to have some form of cap.

“But one of the things that has come though very strongly in the evidence from people across farming is that they would prefer there to be the same percentage reduction for all farmers who are in receipt of BPS. A strong argument has been made and we are discussing it with officials in the department.”

Conservative MP Julian Sturdy suggested a straight cut for all farmers would have a bigger effect on smaller-scale farmers, who are much more reliant on subsidies than larger-scale farmers, especially tenants.

But Mr Gove stressed that, while no definitive decision had yet been made, the message about capping was coming from both large- and small-scale farmers.

He referred to conversations he had had just this week with County Durham upland sheep farmers, who favoured everyone taking a small slice off their BPS payments.

“Their argument was that everyone has to recognise that change is going to come, so therefore a small reduction for everyone means that nobody can be under any illusions that they have to think about what that change might be,” he said.

Mr Gove also suggested there could be some lower threshold, below which no BPS money would be taken during a transition phase. It was also possible that larger farmers could face slightly bigger BPS cuts than smaller farmers, though he was keen to avoid overcomplicating things.

Conservative MP Caroline Johnson questioned whether cutting BPS for all would restrict the involvement in any new agri-environment scheme to larger farmers, who had the resource to go through the application process.

But Mr Gove rejected this suggestion. “There are some farmers – for example, some large tenant farms – where the business is in receipt of a significant BPS payment, but is not a supremely well capitalised or extremely profitable business. So it is not automatically the case that a large BPS payment correlates to someone who is wealthy.”

Countryside Stewardship not fit for purpose

Defra’s delivery of the Countryside Stewardship scheme has been weak and this is undermining confidence in both current and future schemes, Mr Gove told the Efra committee.

“One of the biggest problems we have is that the imperfect delivery of Countryside Stewardship means that people who would otherwise be undertaking environmental enhancement are not in the scheme and are wary of joining future schemes as well,” he said.

According to Efra committee chairman Neil Parish, this was absolutely fundamental to the government being able to deliver its environmental objectives.

“If we are going to take the farming community with us, they are going to need more confidence than they have at the moment in the agencies’ ability to deliver,” he said. “Yet there is very little confidence on the ground because of the time and complexity involved, and the fact they don’t hear from the agency for months.”

Mr Gove revealed there were changes on the way soon that would ease some of the problems.

He also acknowledged the input of the CLA with its recent Land Management Contract proposal. While insisting this might not be the exact model Defra comes out with, the ideas it contained were “very useful”.