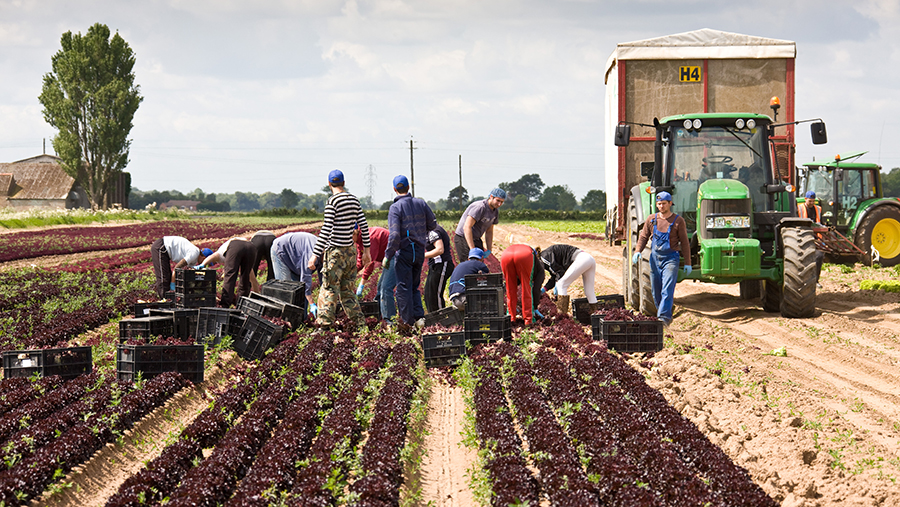 Freedom of movement for European citizens entering the UK will end on 31 October under a no-deal Brexit, leaving the agriculture and horticulture industries questioning how they will get access to seasonal workers.

A blog published on the Home Office website says that arrangements for people coming to the UK for longer periods of time and for work and study “will change”.

EU nationals will still be able to come to the UK for a holiday and for short trips, but the government says plans for a new immigration system are “being developed”.

Prime minister Boris Johnson has indicated that he wants to introduce an Australian-style points-based immigration system, which would allow the UK to welcome people to the country on a visa system, based on meeting set criteria.

The NFU says it is “incredibly concerned” about the effect the policy could have on the farming and horticulture industries, which rely on 70,000 to 80,000 seasonal workers – many of them EU nationals – to help harvest crops.

A joint letter from farming unions, including the NFU and NFU Scotland, has been sent to home secretary Priti Patel to express the need for urgent clarity about how EU workers can come to the UK post-Brexit and reiterate to her the crucial role they play in delivering safe, traceable and affordable food to the British public.

The letter points out that EU nationals are required to fill a range of food and farming roles, including positions in abattoirs, processing, packaging and manufacturing – as well as delivering produce from field to fork.

The weak pound, a perception among some EU nationals that they are no longer welcome in the UK since the Brexit vote and a likelihood of a no deal have all affected the industry’s ability to source staff from the EU – both permanent and seasonal.

Defra has introduced a seasonal agricultural workers’ scheme pilot for 2019 and 2020, which allows two pilot operators to source up to 2,500 workers from outside the EU for up to six months.

But unless the scheme is vastly expanded, staff shortages will arise.

NFU deputy president Guy Smith said: “With no current alternative arrangements being communicated by government, a critical supply of people for British food and farming will be cut off overnight and our members feel it leaves an irresponsible gap in government policy.

“Farmers and growers are alarmed by this decision and it has left them with no clarity about whether they will have access to workers from the EU after 31 October.”